Ecosystem is the functional unit of nature where living organisms interact among themselves and also with the surroundings physical environment.

Ecosystem : There are  two basic categories of ecosystem , namely the terrestrial and the aquatic.

The biotic and abiotic factors of ecosystem work in integrated manner for flow of energy within the components of ecosystem. Interaction of biotic and abiotic components results in a physical structure that is characteristic for each type of ecosystem. The vertical distribution of different species occupying different levels is called stratification.For example, trees occupy top vertical strata or layer of a forest, shrubs the second and herbs and grasses occupy the bottom layers.

The components of ecosystem that are seen as functional unit are

NPP is the available biomass for consumption to heterotrophs. Secondary productivity is defined as the rate of formation of new organic matter by consumers.

Energy Flow- All living organisms are dependent for their food on producers, directly or indirectly. There is a unidirectional flow of energy from the sun to producers and then to consumers. Photosynthetically active radiation (PAR) is responsible for synthesis of food by plants. Animals obtain their food from plants, so they are called consumers. The process of eating and being eaten is called food chain in which energy flow from producers to consumers. In Grazing food chain (GFC)-

The detritus food chain begins (DFC) begins with dead organic matter. It is made up of decomposers which are heterotrophic organisms (fungi and bacteria). These are also known as saprotrophs (sapro: to decompose). Decomposers secrete digestive enzymes that breakdown dead and waste materials into simple, inorganic materials, which are subsequently absorbed by them.Natural interconnection of food chain forms the food web. 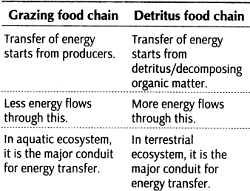 Based on source of food, organism occupies a specific place in food chain that is known as trophic level. 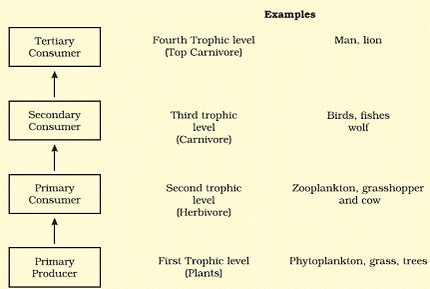 Each tropic level has a certain mass of living material at particular time called as standing crop. It is measured as biomass of living organism or number in unit area.

Ecological pyramid is the graphical representation of an ecological parameter (number, biomass, energy) sequence wise in various trophic levels of a food chain with producers at the base and herbivores in the middle and carnivores at the top tiers. It can be upright, inverted, or spindle shaped.

a) Pyramids of number- employs the number of individuals per unit area at various trophic levels with producer at base and various consumers at successively higher levels. It is generally upright.

A pyramid of number in case of a big tree is generally inverted because number of  insects  feeding on that tree generally exceeds in number.

b) Pyramids of biomass- represent the biomass in various trophic levels. A pyramid of mass is upright except in aquatic food chain involving short lived plankton.

A pyramid of biomass in sea is generally inverted because biomass of fishes generally exceeds that of phytoplankton. 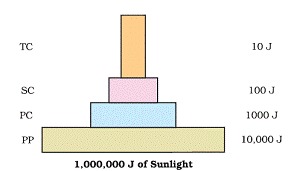 The gradual and fairly predictable change in species composition of a given area is called ecological succession. During succession some species colonise an area and their population becomes more numerous whereas population of other species decline and even disappear.

· Orderly and sequential change that leads to a community that is near equilibrium is called climax community.

· The entire sequence of communities that successively changes in a given area is called sere and individual transitional communities are termed seral stage or seral communities.

· Primary succession starts where no organism are there. For example bare rocks, cooled volcano etc. Secondary succession occurs in the area where the living organisms have lost due to certain regions like forest fire. Earthquake etc.

On the basis of nature of habitat, succession of plants can be grouped as-

o Hydrach succession takes place in wetter area and the successional series progress from hydric to the mesic conditions. 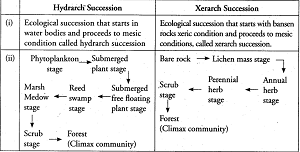 · In primary succession in water, the pioneer species are the small phytoplanktons that are replaced by free floating angiosperms. 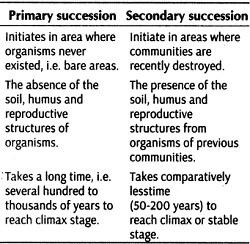 The movement of nutrients elements through the various components of an ecosystem is called nutrient cycling. It is also called as biogeochemical cycles. There are two types of nutrient cycles-

Environmental factors like soil, moisture, pH, temperature regulate the rate of release of nutrients into the atmosphere. The function of reservoir is to meet with the deficit which occurs due to imbalance in the rate fo influx and efflux.

Carbon cycling occurs through atmosphere, ocean and through living and dead organisms. Most of carbon is fixed by plants during the process of photosynthesis and returns to atmosphere in form of CO2 during respiration. Burning of wood, forest fire and combustion of organic matter, fossil fuel, and volcanic activity are other sources of releasing CO2 in the atmosphere. 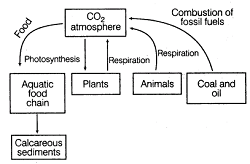 The natural reservoir of phosphorus is rock which contains phosphorus in the form of phosphates. On weathering, minute amount of phosphates dissolve in soil solution and absorbed by the roots of the plants. The waste products of dead organisms are decomposed by bacteria to release phosphorus. Gaseous exchange between organism and environment is negligible as compared to carbon. 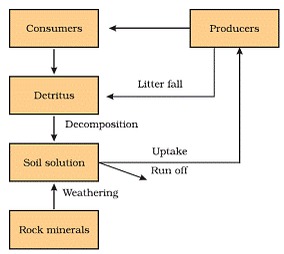 The products of ecosystem processes are called ecosystem services. It includes-

Researchers have put an average price tag of US $33 trillion a year on these fundamental ecosystems services which are taken granted because they are free although its value is twice the total global gross national product (GNP).

Ecosystem class 12 Notes Biology. CBSE quick revision note for class-12 Chemistry Physics Math’s, Biology and other subject are very helpful to revise the whole syllabus during exam days. The revision notes covers all important formulas and concepts given in the chapter. Even if you wish to have an overview of a chapter, quick revision notes are here to do if for you. These notes will certainly save your time during stressful exam days.