CBSE guide notes are the comprehensive notes which covers the latest syllabus of CBSE and NCERT. It includes all the topics given in NCERT class 12 Biology text book. Users can download CBSE guide quick revision notes from myCBSEguide mobile app and my CBSE guide website.

The DNA – it is a long polymer of deoxyribonucleotides. A pair of nucleotide is also known as base pairs. Length of DNA is usually defined as number of nucleotides present in it. Escherichia coli have 4.6 x 106 bp and haploid content of human DNA is 3.3 × 109 bp.

In RNA, nucleotide residue has additional –OH group present at 2’-position in ribose and uracil is found at the place of Thymine.

Double Helix Model for Structure of DNA-James Watson and Francis Crick, based on X-ray diffraction data produced by Wilkin and Rosalind proposed this model of DNA.

The silent features of this model are-

a) DNA is made of two polynucleotide chains in which backbone is made up of sugar-phosphate and bases projected inside it.

d) Two chains are coiled in right handed fashion. The pitch of helix is 3.4 nm and roughly 10 bp in each turn.

e) The plane of one base pair stacks over the other in double helix to confer stability.

In prokaryotes, well defined nucleus is absent and negatively charged DNA is combined with some positively charged proteins called nucleoids. 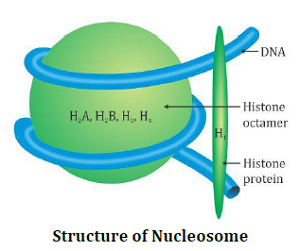 The search for Genetic Material

Transforming principle – Frederick Griffith in 1928 conducted experiment on bacteria Streptococcus pneumoniae (bacterium responsible for pneumonia). There are two types of strain of this bacteria, some produce smooth shiny colonies (S) and others produce rough colonies(R). Mice infected with the S strain (virulent) die from pneumonia infection but mice infected with the R strain do not develop pneumonia.

Griffith concluded that R strain bacteria have somehow transformed by heat killed S strain bacteria. Some transforming principles transferred from S strain to R strain and enabled the R strain to synthesise a smooth polysaccharide coat and become virulent. This must be due to the transfer of the genetic material.

Experimental proof that DNA is the genetic material

His experiment shows that protine does not enter the bacterial cell and only DNA is the genetic material. 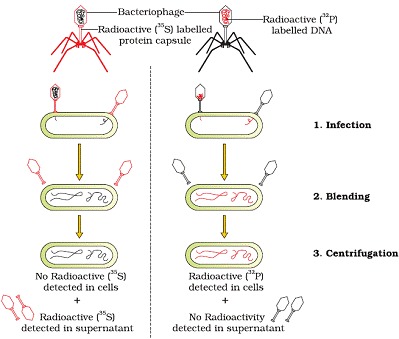 • DNA is chemically less reactive but strcturely more stable as compare to RNA. So, DNA is better genetic material.

• RNA used as genetic material as well as catalyst and more reactive so less stable. Therefore, DNA has evolved from RNA.

Watson and Crick suggested that two strands of DNA separate from each other and act as template for synthesis of new complementary strands. After the completion of replication each DNA molecule would have one parental and one newly synthesised strand, this method is called semiconservative replication.

Replication : Replication of DNA require Enzyme DNA polymerase that catalyse the polymerisation in one strand 5’à3’ only after unwinding with the help of Helicase enzyme . So, replication in one stand is continuous and other strand it is discontinuous to synthesise okazaki fragments that are joined together by enzyme DNA ligase.

Differences between leading and Lagging strands for DNA replication. 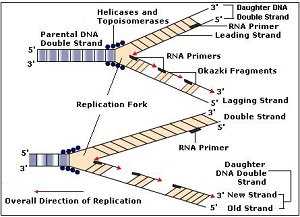 • Transcription of DNA includes a promoter, the structural gene and a terminator. The strands that has polarity 3’à5 act as template and called template strand and other strand is called coding strand. 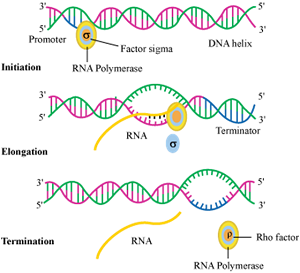 The m-RNA provide the template, t-RNA brings the amino acids and read the genetic code, the r-RNA play structural and catalytic role during translation.

The primary transcript contains both exon and intron and is non-functional. It undergoes the process of splicing in which introns are removed and exons are joined in a defined order.

The hnRNA (heterogeneous nuclear RNA) undergo additional processing called as capping and tailing. In capping in unusual nucleotide (methylguanosine triphosphate) to the 5’end of hnRNA. In tailing polyadenylatelate tail is added at 3’end in a template at independent manner.

George Gamow suggested that genetic code should be combination of 3 nucleotides to code 20 amino acids.

Salient features of Genetic Code are-

i. The code is triplet. 61 codons code for amino acids and 3 codons do not code for any amino acids called stop codon (UAG, UGA and UAA).

ii. Codon is unambiguous and specific, code for one amino acid.

iii. The code is degenerate. Some amino acids are coded by more than one codon.

iv. The codon is read in mRNA in a contiguous fashion without any punctuation.

v. The codon is nearly universal. AUG has dual functions. It codes for methionine and also act as initiator codon.

A change of single base pair (point mutation) in the 6th position of Beta globin chain of Haemoglobin results due to the change of amino acid residue glutamate to valine. These results into diseased condition called sickle cell anaemia.

Insertion and deletion of three or its multiple bases insert or delete one or multiple codons hence one or more amino acids and reading frame remain unaltered from that point onwards. Such mutations are called frame-shift insertion or deletion mutations.

The t-RNA called as adaptor molecules. It has an anticodon loop that has bases complementary to code present on mRNA and also has an amino acid acceptor to which amino acid binds. t-RNA is specific for each amino acids.

The secondary structure of t-RNA is depicted as clover-leaf. In actual structure, the t-RNA is a compact molecule which look like inverted L. 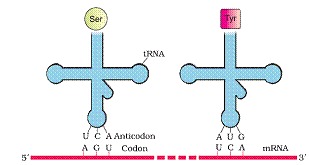 b) Formation of peptide bonds between two charged tRNA.

• The start codon is AUG. An mRNA has some additional sequence that are not translated called untranslated region (UTR).

• For initiation ribosome binds to mRNA at the start codon. Ribosomes moves from codon to codon along mRNA for elongation of protein chain. At the end release factors binds to the stop codon, terminating the translation and release of polypeptide form ribosome. 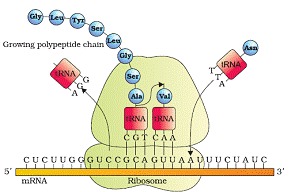 All the genes are not needed constantly. The genes needed only sometimes are called regulatory genes and are made to function only when required and remain non-functional at other times. Such regulated genes, therefore required to be switched ‘on’ or ‘off’ when a particular function is to begin or stop.

Lac operon consists of one regulatory gene (i ) and three structural genes (y,z and a). Gene i code for the repressor of the lac operon. The z gene code for beta-galactosidase, that is responsible for hydrolysis of disaccharide, lactose into monomeric units, galactose and glucose. Gene y code for permease, which increases permeability of the cell. Gene a encode for transacetylase. 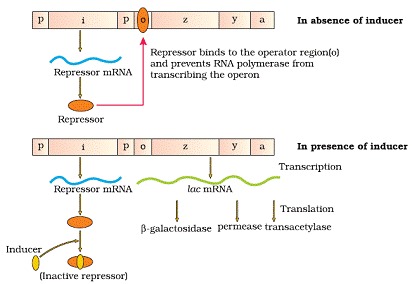 Lactose is the substrate for enzyme beta-galactosidase and it regulates switching on and off of the operon, so it is called inducer.

Human Genome Project was launched in 1990 to find out the complete DNA sequence of human genome using genetic engineering technique and bioinformatics to isolate and clone the DNA segment for determining DNA sequence.

a) Identify all the genes (20,000 to 25,000) in human DNA.
b) Determine the sequence of the 3 billion chemical base pairs that make up human DNA.
c) Store this information in data base.
d) Improve tools for data analysis.
e) Transfer related information to other sectors.
f) To address the legal, ethical and social issues that may arise due to project.

• The project was coordinated by the US Department of Energy and the National Institute of health.
• The method involved the two major approaches- first identifying all the genes that express as RNA called Express sequence tags(EST).The second is the sequencing the all set of genome that contained the all the coding and non-coding sequence called sequence Annotation.

a) The human genome contains 3164.7 million nucleotide bases.
b) The average gene consists of 3000 bases, but sizes vary greatly, with the largest known human gene being dystrophin at 2.4 million bases.
c) Less than 2 per cent of the genome codes for proteins.
d) Repeated sequences make up very large portion of the human genome.
e) Repetitive sequences are stretches of DNA sequences that are repeated many times, sometimes hundred to thousand times.
f) Chromosome 1 has most genes (2968), and the Y has the fewest (231).
g) Scientists have identified about 1.4 million locations where single base DNA differences (SNPs – single nucleotide polymorphism) occur in humans.

DNA finger printing is a very quick way to compare the DNA sequence of any two individual. It includes identifying differences in some specific region in DNA sequence called as repetitive DNA because in this region, a small stretch of DNA is repeated many times.

Depending upon the base composition, length of segment and number of repetitive units satellite DNA is classified into many categories.

Polymorphism in DNA sequence is the basis for genetic mapping of human genome as well as fingerprinting.

The technique of fingerprinting was initially developed by Alec Jeffrey. He used a satellite DNA as probe to so high polymorphism was called Variable Number of Tendon Repeats (VNTR). 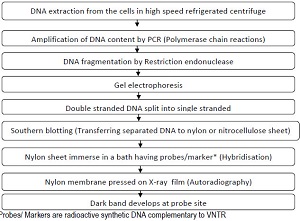 Molecular Basis of Inheritance class 12 Notes Biology. CBSE quick revision note for class-12 Chemistry Physics Maths, Biology and other subject are very helpful to revise the whole syllabus during exam days. The revision notes covers all important formulas and concepts given in the chapter. Even if you wish to have an overview of a chapter, quick revision notes are here to do if for you. These notes will certainly save your time during stressful exam days.