Evolutionary biology is the study of history of life forms on earth. The evolution of life on earth, different changes in flora and fauna around earth that co-exist along with human beings also forms parts of evolution.

The origin of life is considered unique events in the history of universe. Huge cluster of galaxies comprises the universe. Galaxies contain stars and clouds of dust and smoke.

Big Bang Theory attempts to explain the origin of universe. According to this theory, a huge explosion occurs that forms the different galaxies.

In solar system of Milky Way galaxies, earth has been supposed to be formed about 4.5 billion years ago. There was no atmosphere in early earth. Water vapour, methane, carbon dioxide and ammonia released from molten mass covered the earth surface.

UV rays from sun splits the water into hydrogen and oxygen. Life appeared 500 million years after the formation of earth.

There are different theories regarding the origin of life on earth-

Miller experiment of Origin of Life- S.L. Miller in 1953, conducted an experiment to show the origin of life on earth in the physical environment similar to condition prevails at that time. 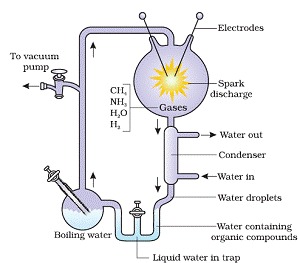 Miller created similar condition of temperature and pressure in laboratory scale. He created electric discharge in a flask containing CH4, H2 and NH3 and water vapour at 8000C.

He observed formation of amino acids in flask after 15 days of electric discharge. Similar experiment by other scientist found formation of sugars, nitrogen bases, pigments and fats.

Analysis of meteorite content also reveals similar compounds that reveal that similar process are occurring elsewhere in the space. This experimental evidence about the origin of life is called chemical evolution of life.

The first non-cellular forms of life could have originated 3 billion years back. They could have been giant molecules like RNA, Protein, and Polysaccharide etc.

The cellular form of life was probably single cell and originates in water medium. The theory that first form of life arose slowly through evolutionary forces from non-living molecules is called biogenesis.

Evidence of Evolution: Evidence that evolution of life forms has taken place on earth have many proofs as mentioned below-

2. Homologous organs- those organs that perform different function but have similar origin and structure are called homologous organs. For example human, cheetah, bat and whales share similarities in pattern of bones of forelimbs although these forelimbs perform different functions in these animals. In these animal similar structure developed along different directions due to adaptation of different needs. This is called divergent evolution.

3. Analogous structures-they are not anatomically similar organs but perform similar function. For example eyes of mammals and octopus or flippers of penguin and dolphins. This is due to similar habitat that resulted in similar adaptive features in different groups of organisms. This that of evolution is called convergent evolution.

Evolution by natural selection- Industrial melanism
A case of natural selection was seen in England in 1850s, i.e., before industrialisation in a peppered moth (Biston betularia). This moth had two forms: grey colour and black colour (Carbonaria). In the early part of the nineteenth century , before industrialization only the grey coloured forms of moths were present; the dark forms were rare. The grey coloured moths were seen on the tree trunks covered with lichens and so they were able to escape from their enemies. Later on in 1920, due to the development of industries, post industralization, the lichens were killed and the tree trunks looked dark due to the deposition of industrial soot. Birds, now were able to spot these moths and feed upon them. So the grey coloured moths were eaten by the birds and the dark coloured moths escaped from the birds. Then now the coal is replaced by the industries and oil and electricity is used. This has reduced the soot production and ultimately less deposition of soot on the tree trunks. These tree trunks have, now, again become grey in colour. Consequently, grey coloured moths have again increased in number. This example clearly brings out the action of natural selection.

Evolution by anthropogenic action – Resistance of mosquitoes to pesticides.

Same pattern has been observed in bacteria which are multidrug resistant due to excess use of drugs and medicines.

Adaptive Radiation- the process of evolution of different species in given geographical area starting from a point and radiating to other areas of geography (habitat) is called adaptive radiation. Darwin’s finches represent one of the best examples of adaptive radiation. Australian marsupials, each with different from other evolved from one ancestral stock, but all within Australian island continents.

When more than one adaptive radiation appeared to have occurred in an isolated geographical area (representing different habitats), we can call this convergent evolution e.g Placental mammals and Australian marsupials.

Biological Evolution – the nature select for fittest and fitness is based on characteristics which are inherited. Some organisms are better adopted to survive in otherwise hostile environment. Fitness is the end result of the ability to adopt and get selected by nature.

Lamarck had said that evolution of life form had occurred but driven by use and disuse of organs. He gave the example of giraffe to evolve their neck by foraging leaves on tall trees and had to adapt by elongation of their necks.

Hugo deVries based on his work on evening primrose brought forth the idea of mutation. Mutation is the large difference arising suddenly in a population.

Hardy- Weinberg Principle- in a given population, frequency of occurrence of alleles or genes can be finding out. These frequencies remains fixed and even remain the same through generation. This fact was represented by Hardy-Weinberg principles using algebraic equation.

This principle states that allele frequencies in a population are stable and is constant from generation to generation. The gene pool remains constant. This is called genetic equilibrium and sum total of all the allelic frequencies is 1.

When frequency is measured, the actual value varies that indicates the extent of evolutionary changes. Change of frequency in a alleles (Hardy-Weinberg equilibrium) in a population resulted due to evolution.

During genetic drift ,sometimes change in alleles frequency is so different in a sample of population that they become a different species. The original drifted population becomes founder and that effect is called founder effect.

About 2000 million ago first cellular form of life appeared on earth. 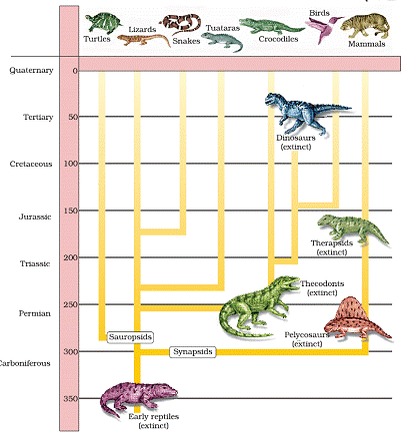 Evolution class 12 Notes Biology. CBSE quick revision note for class-12 Chemistry Physics Math’s, Biology and other subject are very helpful to revise the whole syllabus during exam days. The revision notes covers all important formulas and concepts given in the chapter. Even if you wish to have an overview of a chapter, quick revision notes are here to do if for you. These notes will certainly save your time during stressful exam days.