The techniques of using live organisms or enzymes from organisms to produce products and processes useful to humans. Many processes like in vitro fertilization leading to ‘test-tube’ baby, synthesizing gene and using it, developing a DNA vaccine or correcting a defective gene are also parts of Biotechnology.

The European Federation of Biotechnology (EFB) has given a definition of biotechnology that comprises both traditional and modern molecular biotechnology.The definition is as follow- “The integration of natural science and organisms, cells, parts thereof, and molecular analogous for products and services”.

Modern biotechnology is based on two main principles-

• Maintenance of sterile condition in chemical engineering process to enable growth of only desired microbes for manufacture of biotechnological products like antibiotics, vaccine, enzymes etc.

• Traditional hybridization used in plants and animal breeding leads to inclusion and multiplication of undesirable genes along with the desired traits. The technique of genetic engineering which include creation of recombinant DNA, use of gene cloning and gene transfer allow us to isolate and introduce only one or a set of desirable genes without introducing undesirable genes into the target organism.

• The construction of the first recombinant DNA emerged from the possibility of linking a gene encoding antibiotic resistance with a native Plasmid of Salmonella typhimurium.

• The linking of antibiotic resistance gene with the plasmid vector become possible with the enzyme ligase, which acts on cut DNA molecules and joins their ends. This makes a new combination of autonomously replicating DNA created in vitro and known as recombinant DNA.

“Recombinant DNA technology” or also called “Genetic Engineering” deals about, the production of new combinations of genetic material (artificially) in the laboratory.  These “recombinant DNA” (rDNA) molecules are then introduced into host cells, where they can be propagated and multiplied.

I. Identification of DNA with desirable genes.

II. Introduction of the identified DNA into the host.

III. Maintenance of introduced DNA in the host and transfer of the DNA to its progeny.

Restriction enzymes belong to a larger class of enzymes called Nucleases.  There are of two kinds; Exonucleases and Endonucleases.  Exonucleases remove nucleotides from the ends of the DNA whereas, endonucleases make cuts at specific position within the DNA.

Example, the first restriction endonuclease – Hind II, always cut DNA molecules at a particular point by recognizing a specific sequence of six base pairs. This specific base sequence is known as the Recognition Sequence for Hind II.

• Each restriction endonuclease recognises a specific palindromic nucleotide sequence in the DNA. Palindromes are group of letters that form the same words when read both forward and backward for example “MALYALAM”.

The palindrome in DNA is a sequence of base pairs that reads same on two stands when orientation of reading is kept the same. 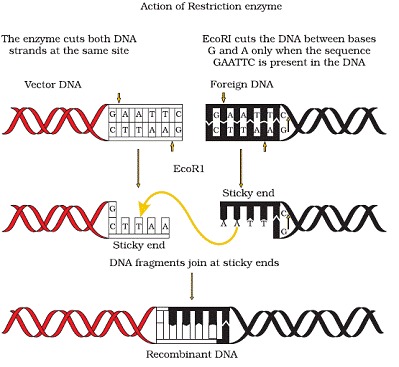 • Restriction enzymes cut the strand of DNA a little away from the centre of the palindrome site between the same two bases on the opposite strands having sticky strand. The stickiness of the strands facilities the action of the enzyme DNA ligase.

• Restriction endonucleases are used in genetic engineering to form recombinant molecules of DNA which are composed of DNA from different sources or genome.

• When cut the same restriction enzyme the resultant DNA fragments have the same kind of Sticky-ends and can be joined together using DNA ligases. 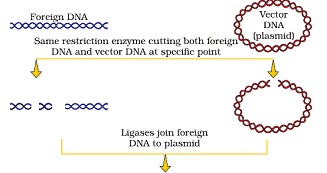 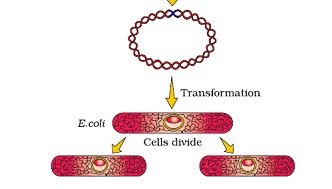 Separation and isolation of DNA fragments

The fragment of DNA obtained by cutting DNA using restriction enzyme is separated by technique called gel electrophoresis. Negatively charged DNA fragments can be separated by forcing them to move towards the anode under an electric field through medium. DNA fragments separate according to their size through sieving effect provided by agarose gel.

• The separated DNA fragment can be visualized after staining the DNA with ethodium bromide followed by exposure to UV light. Separated bands of DNA are separated from agarose gel and extracted from gel, called elution. The DNA fragment purified this way is used for recombination.

Following features are required to facilitate cloning into a vector-

a. Origin of replication (ori) – the sequence from where replication starts and any piece of DNA when linked to this sequence can be made to replicate within the host cells.This sequence is responsible for controlling the copy number of the linked DNA.

b. Selectable marker-help in the identifying and eliminating non transformants and selectively permitting the growth of the transformants. Transformation is a procedure through which a piece of DNA is introduced in a host bacterium. Generally,the genes encoding resistance to antibiotics such as ampicillin, chloramphenicol, tetracycline or kanamycin, etc., are considered useful selectable markers for E. coli.

c. Cloning sites– to link the foreign DNA, the vector need to have single recognition sites for the commonly used restriction enzymes as presence of more than one recognition sites within the vector will generate several fragments, which will complicate the gene cloning. The ligation of foreign DNA is carried out at a restriction site present in one of the two antibiotic resistance genes. 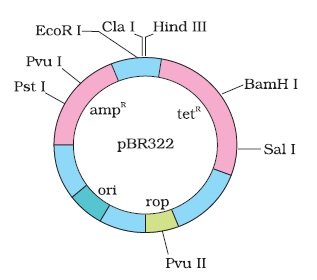 E. coli cloning vector pBR322 showing restriction sites (Hind III, EcoR I, BamH I, Sal I, Pvu II, Pst I, Cla I), ori and antibiotic resistance genes (ampR and tetR ). rop codes for the proteins involved in the replication of the plasmid.

Insertional inactivation:
The most efficient method of screening for the presence of recombinant plasmids is based on the principle that the cloned DNA fragment disrupts the coding sequence of a gene.  This is termed as Insertional Inactiviation.

For example, the powerful method of screening for the presence of recombinant plasmids is referred to as Blue-White selection.  This method is based upon the insertional inactivation of the lac Z gene present on the vector.  The lac Z gene encodes the enzyme beta-galactosidase, which can cleave a chromogenic substrate into a blue coloured product.  If this lac Z gene is inactivated by insertion of a target DNA fragment into it, the development of the blue colour will be prevented and it gives white coloured colonies.  By this way, we can differentiate recombinant (white colour) and non-recombinant (blue colour) colonies.

d. Vectors for cloning genes in plants and animals– Agrobacterium tumefactions (pathogen of dicot plant) is able to deliver a piece of DNA known as ‘T-DNA” to transform normal plant cells into a tumor and direct these tumor cells to produce the chemicals required by the pathogen. Retroviruses in animals have the ability to transform normal cells into cancerous cells. The tumor inducing (Ti) plasmid of Agrobacterium tumefaciens has been modified into cloning vector having no more pathogenic to plant. Similarly retrovirus have been modified into cloning vector for animals.

1)      Simple chemical treatment with divalent calcium ions increases the efficiency of host cells (through cell wall pores) to take up the rDNA plasmids.
2)      rDNA can also be transformed into host cell by incubating both on ice, followed by placing them briefly at 42oC (Heat Shock), and then putting them back on ice. This enables the bacteria to take up the recombinant DNA.
3)      In Microinjection method, rDNA is directly injected into the nucleus of  cells by using a glass micropipette.
4)      Biolistics / Gene gun method, it has been developed to introduce rDNA into mainly plant cells by using a Gene / Particle gun.  In this method, microscopic particles of gold / tungsten are coated with the DNA of interest and bombarded onto cells.
5)      The last method uses “Disarmed Pathogen” Vectors (Agrobacterium tumefaciens), which when allowed to infect the cell, transfer the recombinant DNA into the host.

a. Isolation of DNA

b. Fragmentation of DNA by restriction endonucleases

d. Ligation of the DNA fragment into vector

e. Transforming the recombinant DNA into the host

f. Culturing the host cells in a medium at large scale

g. Extraction of the desired product.

• Amplification of Gene of Interest using PCR( Polymerase Chain Reaction) to get multiple copies of the DNA or gene of interest in vitro by using set of primers and enzyme DNA polymerase. 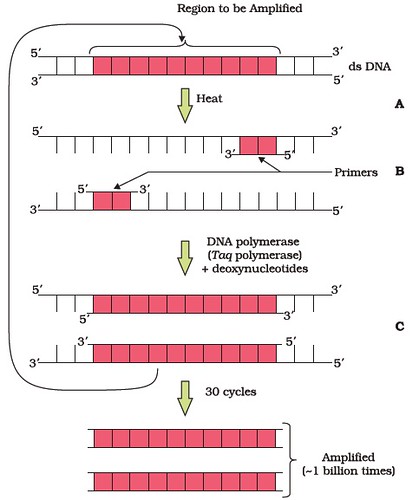 Polymerase chain reaction (PCR) : Each cycle has three steps: (A) Denaturation; (B) Primer annealing; and (C) Extension of primers

This repeated amplification is done by the use of a thermostable DNA polymerase (isolated from a bacterium, Thermus aquaticus), which remain active during the high temperature induced denaturation of double stranded DNA.

• Insertion of Recombinant DNA into the Host Cell/Organism includes making the recipient cells competent to receive, take up DNA present in its surrounding etc. The recombinant DNA bearing gene for resistance to an antibiotic is transferred into E.coli cells, the host cell become transformed into ampicillin-resistance cells.

• Obtaining the foreign gene product – the foreign DNA multiplies in plant or animal cell to produce desirable protein. Expression of foreign genes in host cells involve, optimized condition to obtain recombinant protein. The recombinant cell is multiplied in a continuous culture system in which used medium is drained out from one side while fresh medium is added from the other to maintain the cells in their physiological active phase. A bioreactor provides the optimal conditions for achieving the desired product by providing optimum growth conditions (temperature, pH, substrate, salts, vitamins, oxygen). 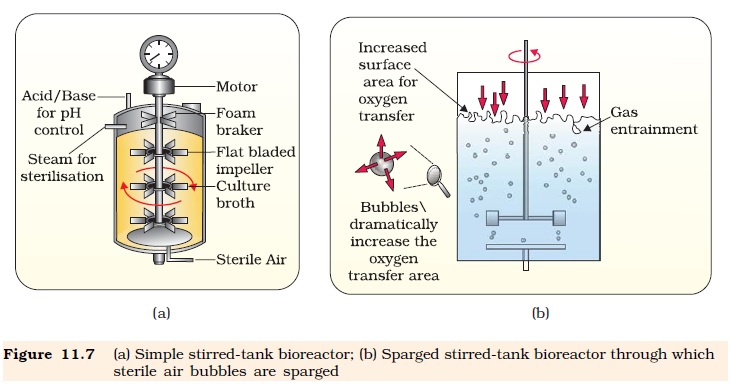 • Downstream Processing involves processes that make the product obtain ready for marketing. This process includes separation and purification called as downstream processing. Suitable preservatives are added to it and send for clinical trial in case of drugs before releasing to market for public use

Biotechnology Principles and Processes class 12 Notes Biology. CBSE quick revision note for class-12 Chemistry Physics Math’s, Biology and other subject are very helpful to revise the whole syllabus during exam days. The revision notes covers all important formulas and concepts given in the chapter. Even if you wish to have an overview of a chapter, quick revision notes are here to do if for you. These notes will certainly save your time during stressful exam days.