With increase in human population, demands for food, shelter, water, electricity, roads, and automobiles are increasing rapidly and exerting pressure on environment and altering the natural health of ecosystem. All across the world, people are facing a wealth of new and challenging environmental problems every day. Some of them are- pollution, greenhouse effect, ozone depletion, deforestation etc.

Air Pollution and its Control

Air is essential for respiration in all living organisms. Pollutants reduce growth and production of crops as well as premature death of plants. The harmful effect of pollution on all the living organisms depends upon-

Thermal power plants, smelters and other industries release particulate and gaseous air pollutants along with harmless gases such as nitrogen, oxygen etc. These pollutants should be filtered out before releasing the harmless gases into the atmosphere. There are many methods of removing particulate matter; the most widely used is the electrostatic precipitator.

Electrostatic Precipitator- can remove over 99% of particulate matter present in the exhaust from thermal power plant. 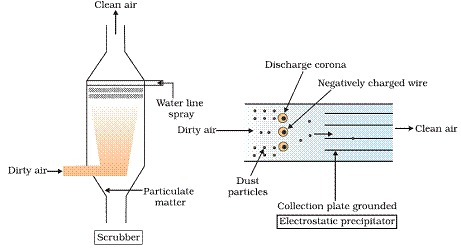 It has electrode wires that are maintained at several thousand volts to produce a corona that releases electrons. These electrons attach to dust particles giving them a net negative charge. The collecting plates are grounded and attract the charged dust particles to that clean air can pass through electrostatic precipitator.

A scrubber can remove gases like sulpher dioxide. The exhaust is passed through spray of water or lime.

Water Pollution and it Control

Water bodies are lifeline of human beings as well as other animals. Due to disposal of all kinds of waste and other anthropogenic actions the ponds, lakes, stream, river, estuaries and oceans are becoming polluted in several parts of world. The Government of India has passed the Water (Prevention and Control of Pollution) Act, 1974 to protect the water resources.

The sewage that comes out from house and office makes the domestic sewage. A mere 0.1% impurities make domestic sewage unfit for human use. Solid wastes are relatively easy to remove but dissolved salts as nitrates, phosphates and other nutrients and toxic metal ions and organic compounds present in domestic wastes are comparatively difficult to remove.

Domestic sewage mainly contains biodegradable organic matter, which can be easily  decomposed by microbes like bacteria and fungi. They use organic wastes as nutrients.

The microbes that decompose organic wastes in water bodies consume a lot of oxygen that result into sharp decline in dissolved oxygen downstream from the point of sewage discharge. This causes mortality of fish and other aquatic creatures.

BOD refer to the amount of oxygen that would be consumed if all the organic matter is one litre of water were oxidized by bacteria. The BOD test measures the rate of uptake of oxygen by micro-organisms in a sample of water. Indirectly BOD is a measure of the organic matter present in the water. The greater the BOD of waste water, more is its polluting potential. 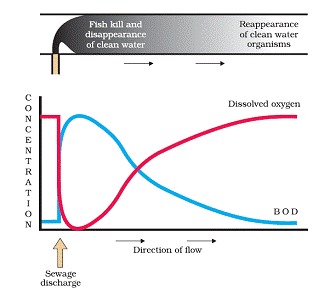 Presence of large amount of organic nutrients in water causes excessive growth of planktonic or free floating algae called algal bloom. Due to this colour of water bodies get changed. This may cause deterioration of the water quality and fish mortality.

Water hyacinth (Eichhornia  crassipes) is the world’s most problematic aquatic weed. They are introduced into India for their beautiful  flowers that have caused havoc by their excessive growth by causing blocks in our water bodies. This weed is commonly known as  ‘Terror of Bengal’.

Toxic wastes present in industrial wastes and water from farmhouse containing pesticides and weedicides enters the food chain of aquatic organisms. The increase in concentration of toxicant at each successive trophic levels is called biological magnification. The most common toxicant that get accumulated at successive trophic levels includes DDT and Mercury. High concentrations of DDT disturb calcium metabolism in birds, which causes thinning of eggshell and their premature breaking, eventually causing decline in bird populations.

It is the natural aging of a lake by biological enrichment of its water. Due to addition of nutrients such as nitrogen and phosphorus that encourage the growth of aquatic organism the accumulation of organic remains in course of time leads to shall lowing of lake. Over the centuries the silt and organic debris piles up at the bottom of lake and encourage the growth of marsh plants in the shallow and begin to fill in the original lake basin. Eventually large masses of floating plants grows and finally converting into land.

The pollutants from man’s activities such as effluents from the industries and homes radically accelerate the aging of lake. This phenomenon is called Cultural or Accelerated Eutrophication. Main contaminants include nitrates, phosphates that act as plant nutrients.They increase  the growth of algae, causing unsightly scum and unpleasant odors, and depleting the dissolved oxygen of water which is important for other aquatic life.

Wastewater including sewage can be treated in an integrated way, by combining artificial and natural processes. An example of such an initiative is the town of Arcata, situated along the northern coast of California .The native people in collabaration with Humboldt State University created an integrated waste water treatment process within a natural system. The cleaning occurs in two stages –

(a) the conventional sedimentation, filtering and chlorine treatments are given.

(b) To combat with pollutants like dissolved heavy metals  , the biologists developed a series of six connected marshes over 60 hectares of marshland where plants, algae, fungi and bacteria were seeded which neutralise, absorb and assimilate the pollutants.

As the water flows through the marshes, it gets purified naturally. The marshes also constitute a sanctuary, which is highly diverse in the form of fishes, animals and birds that now reside there.

A citizens group called Friends of the Arcata Marsh (FOAM) are responsible for the safety of this project.

Ecological sanitation is a sustainable system for managing human excreta, using dry composting toilets. This is a practical, hygienic, efficient and cost-effective solution to human waste disposal. The important part is that with this composting method, human excreta can be recycled into natural fertiliser. There are working ‘EcoSan’ toilets in many areas of Kerala and Sri Lanka

Municipal solid wastes are wastes from home, offices, stores, schools, hospitals etc. that are collected and disposed by the municipality. It consists of paper, food wastes, plastics, glass, metals, rubber, leather, textile etc.Burning reduces the volume of the wastes but the waste generally not burnt to irts completion and open dumps often serve as the breeding ground for rodents  and flies. Sanitary landfills were used as substitute for open burning dumps where wastes are dumped in a depression or trench after compaction and covered with dirt every day. There is a danger of seepage of chemicals from these landfills polluting the underground water resources.

Electronic wastes-  Unrepairable computers and other electronic goods are known as electronic wastes (e-wastes). E-wastes are buried in landfills or incinerated. Over half of the e-wastes generated in the developed world are exported to developing countries, mainly to China, India and Pakistan, where metals like copper, iron, silicon, nickel and gold are recovered during recycling process. Recycling is the only solution for the treatment of e-wastes provided it is carried out in an environment-friendly manner

Agro-chemicals and other effects

Use of inorganic fertilizers and pesticides has been increased many fold due to green revolution for enhancing crop production. The pesticides and insecticides are toxic to non-target organisms that are important components of the soil ecosystem. They are biomagnified in the terrestrial ecosystem and also causes eutrophication in aquatic ecosystems .

Integrated organic farming is a cyclic, zero-waste procedure in which waste products from one process are cycled in as nutrients for other processes to allow the maximum utilization of resource and increase the efficiency of production. It includes bee-keeping, dairy management, water harvesting, composting and agriculture in a chain of processes which support each other and allow an extremely economical and sustainable venture. No chemical fertilizer is used in this process.

The radiation released from nuclear wastes is extremely damaging to biological organisms as it causes mutations to occur at very high rate. It has been recommended that storage of nuclear wastes after sufficient pre-treatment should be done in suitably shielded containers and buried within the rock about 500m deep below the earth surface.

The greenhouse effect is a naturally occurring phenomenon that is responsible for heating of Earth’s surface and atmosphere due to increase in concentration of carbon dioxide and methane gas. Clouds and gases reflect about one-fourth of the incoming solar radiation and absorb some of it but almost half of incoming solar radiation falls on Earth’s surface heating it, while a small proportion is reflected back. The surface of earth re- emits heat in the form of infrared radiation but part of this does not reflected back due to greenhouse gases that leads to heating of earth atmosphere. Global warming is caused due to greenhouse effect.

Scientists believe that this rise in temperature is leading to harmful changes in the environment and resulting in odd climatic changes (e.g. El Nino effect) , thus leading to increased melting of polar ice caps. 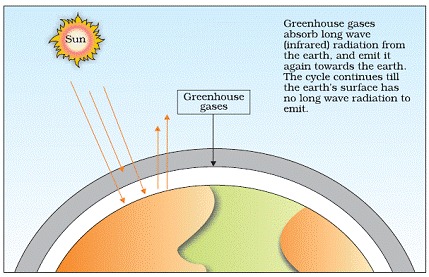 Global warming can be controlled by

Ozone Depletion in the Stratosphere

Ozone found in the upper part of the atmosphere called stratosphere acts as a shield absorbing ultraviolet radiation form the sun. UV rays are highly injurious to living organisms.

The thickness of the ozone-layer in a column of air from the ground to the top of the atmosphere is measured in tems of Dobson units (DU). Ozone layer absorbs the harmful UV-rays. It causes aging of skin, damage to skin cells and various types of skin cancers. In human eye, cornea absorbs UV-B radiation, and a high dose of UV-B causes inflammation of cornea, called snow-blindness cataract, etc. Such exposure may permanently damage the cornea.

Chlorofluro Carbons deplete the ozone layer. The part of atmosphere with lesser concentration of ozone is called ozone hole.

It is the conversion of forested areas to non-forested ones due to human activities like slash and burn agriculture also called Jhum cultivation where farmers cut down trees and burn the plant remains. Ash is used as a fertiliser and the land is then used for farming or cattle grazing ;use of fertilizers and cutting of trees for industries and residential use. Main consequence of deforestation includes-

Reforestation: Process of restoring a forest that was removed at some point of time in the past.

The Government of India has recently started the Amrita Devi Bishnoi Wildlife Protection Award for individuals or communities from rural areas that have shown extraordinary courage and dedication in protecting wildlife.

Chipko Movement – In 1974, local women of Garhwal Himalayas showed tremendous courage in protecting trees from the axe of contractors by hugging them. People all over the world have appreciated  the Chipko movement.

Realising the importance of participation by local communities, the Government of India in 1980s has introduced the concept of Joint Forest Management (JFM) so as to work closely with the local communities for protecting and managing forests.

Environmental Issues class 12 Notes Biology. CBSE quick revision note for class-12 Chemistry Physics Math’s, Biology and other subject are very helpful to revise the whole syllabus during exam days. The revision notes covers all important formulas and concepts given in the chapter. Even if you wish to have an overview of a chapter, quick revision notes are here to do if for you. These notes will certainly save your time during stressful exam days.