Humans are sexually reproducing and viviparous. The reproductive events in humans include formation of gametes (gametogenesis), i.e., sperms in males and ovum in females, transfer of sperms into the female genital tract (insemination) and fusion of male and female gametes (fertilisation) leading to formation of zygote. This is followed by formation and development of blastocyst and its attachment to the uterine wall (implantation), embryonic development (gestation) and delivery of the baby (parturition)

The Male Reproductive System: It cChapteronsists of:

a) Primary sex organs i.e. a pair of testes suspended in a scrotum.

b) Secondary sex organs i.e. a pair of ducts each differentiated into rete testis, vasa efferentia, epididymis and vas deferens, ejaculatory duct and the associated glands 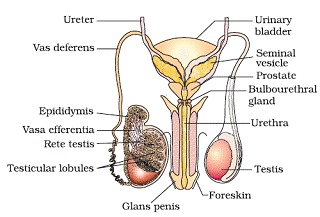 The Female Reproductive System: It consists of :

a)The primary sex organ that is a pair of ovaries

b)Secondary sex organs- the duct system consisting of a pair of fallopian tube , a uterus , cervix and vagina

Gametogenesis: The process of formation of male and female gametes in testes and ovary respectively is called gametogenesis.It is of two types:
1. Spermatogenesis in males
2. Oogenesis in females 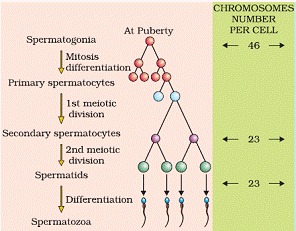 Structure of sperm- sperm is a microscopic structure composed of a head, neck, a middle piece and a tail. The sperm head contain elongated haploid nucleus, anterior portion of which is covered by cap like structure acrosome. 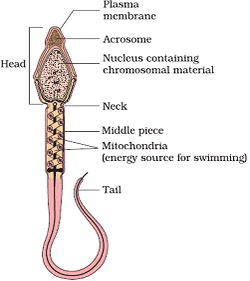 Human male ejaculates about 200-300 million sperms during a coitus. The seminal plasma along with the sperms constitutes the semen. The function of male sex secondary ducts and glands are maintained by androgen hormones.

Oogenesis : The process of formation of mature female gametes is called oogenesis. It started during embryonic development stage when millions of ogonia (gamete mother cells) are formed in each fetal ovary. 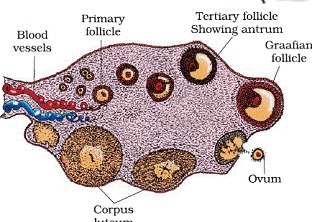 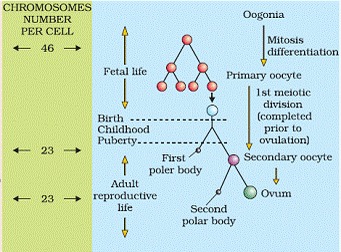 (ii) The production of LH from the anterior lobe of the pituitary gland is reduced.

(iii) The withdrawal of  this hormone causes degeneration of the corpus luteum and, therefore progestrone production is reduced.

(iv) Production of oestrogen is also reduced in this phase.

(v) The endometrium of uterus breaks down & menstruation begins.

(ii) The follicle stimulating hormone (FSH) secreted by the anterior lobe of the pituitary gland stimulates the ovarian follicle to secrete oestrogens.

(iii) Oestrogen stimulates the proliferation of the endometrium of the uterine wall.

(iv) The endometrium becomes thicker by rapid cell multiplication and this is accompanied by an increase in uterine glands & blood vessels.

(iii) Rapid secretion of LH induces rupturing of graffian follicle and thereby the release of ovum.

(i) FSH stimulates the ovarian follicles to produce oestrogens.

(iii) Menstrual phase is caused by the increased production of oestrogens.

(v) Proliferative phase is caused by the increased production of oestrogens.

(vi) Secretory phase is caused by increased production of progestrone.

The process of fusion of sperm with ovum is called fertilisation.

(a) Immediately after the entry of a sperm into the egg, the later shows a cortical reaction to check the entry of more sperms.

(b) In this reaction, the cortical granules present beneath the egg’s plasma membrane release chemical substance between the ooplasm and the plasma membrane (vitelline membrane).

(d) The increased space between the ooplasm and the fertilization membrane and the chemical present in it effectively check the entry of other sperm.

(e) If polyspermy occurs, that is more than one sperm enter the secondary oocyte, the resulting cell has too much genetic material to develop normally

The finger-like projections on trophoblaste after implantation called is called chronic villi that along with uterine wall forms functional unit between developing embryo and maternal body called placenta. Placenta is attached with fetus with an umbilical cord that transport food and oxygen to embryo.

The mammary glands of female, start producing milk, to the end of pregnancy by the process of lactation. The milk produced during the initial few days of lactation is called colostrum, which contain several antibodies.

Human Reproduction class 12 Notes Biology. CBSE quick revision note for class-12 Chemistry Physics Math’s, Biology and other subject are very helpful to revise the whole syllabus during exam days. The revision notes covers all important formulas and concepts given in the chapter. Even if you wish to have an overview of a chapter, quick revision notes are here to do if for you. These notes will certainly save your time during stressful exam days.