The state of complete physical, mental and social well beings is called health. Health simply does not simply means disease-free condition or physical fitness. Health is affected by-
a. Genetic disorders – the defect which child inherits from it parents.
b. Infection from microbes or other organisms.
c. Lifestyle- includes food and water we take, exercise and rest.

Good health can be maintained by

Disease – Diseases can be broadly grouped into infectious and non-infectious.

Life cycle of plasmodium : Plasmodium enters the human body as small sporozoites through the bite of infected female anopheles mosquito and multiplies within the lever cells. Later attacks the RBCs resulting the rapture with release of toxic substance, haemozoin, which is responsible for high fever and chill recurring every three to four days.

Flowchart to show lifecycle of Plasmodium 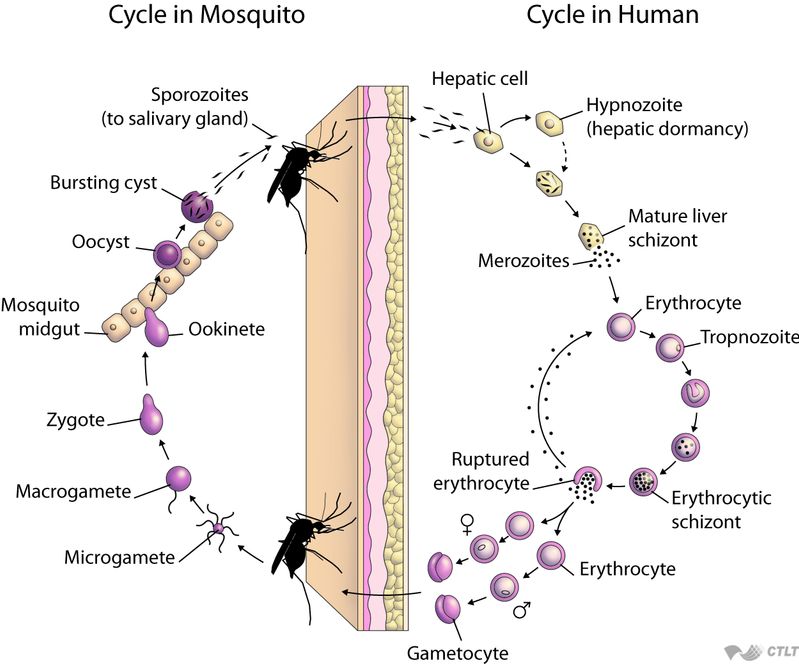 Immunity – the ability of host cells to fight the disease causing microorganism due to immune system is called immunity. There are two types of immunity-

Innate immunity – non-specific types of defence presents at the time of birth and provide different kinds of barriers to the entry of foreign agents into the body. it consists of four types of barrier-

b. Physiological barrier- acid in stomach and saliva in mouth.

Primary and secondary responses are carried out with the help of B-lymphocytes and T-lymphocytes. B-lymphocytes produce army of protein called antibodies each having two light and two heavy chains.

It involves two types of lymphocytes –

Structure of an Antibody: 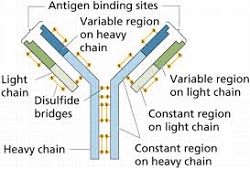 On the basis of production of antibodies, immunity can be further categorised as –

Different types of antibodies produce in blood include IgA, IgM, IgEete. They are called humoral immune response due to presence in blood.

Human immune system can distinguish between self and foreign molecules or foreign bodies. Sometimes, due to genetic or unknown reasons, the body attack self-cells. This results in damage to the body and called auto-immune disease. Rheumatoid arthritis is due to this effect

Allergies – the exaggerated response of immune system to certain antigens present in the environment is called allergy. The substance to which such immune response is produced is called allergens. The antibodies produced due to these are IgE types. Allergy is due to secretion of chemicals like histamine and serotonin from the mast cells.

Lymphoid organs are the organs where origin and maturation and proliferation of lymphocytes occur. Primary lymphoid organs include bone marrow and thymus.

After maturation lymphocytes migrate to secondary lymphoid organ like spleen, lymph nodes, tonsils, peyer’s patches of small intestine and appendix. They provide the sites for interaction lymphocyte with antigens.

AIDS (Acquired Immuno Deficiency Syndrome) was first reported in 1981. It is caused by HIV (human Immuno deficiency virus), a retrovirus. Transmission of HIV virus occurs by-

b. Transfusion of contaminated blood and blood products

d. Infected mother to her child through placenta.

Replication of retrovirus in Macropahges 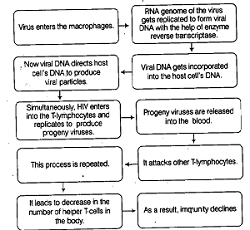 AIDS/HIV does not spread by physical contact. It spread only through body fluids. There is always time lag between infection and appearance of symptoms that may vary from 5-10 years.

Diagnostic test for AIDS is ELISA (enzyme-linked Immuno-sorbent assay). The treatment of this disease with anti-retroviral drug is partially effective and just prolonged the life but not prevents the death. 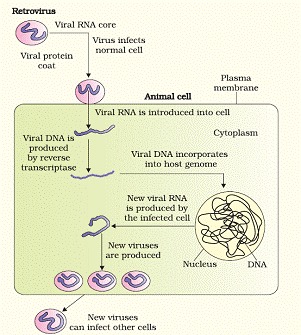 Cancer is one of the most dreaded diseases of human beings and is a major cause of death all over the world. Normal cells show a property called contact inhibition by virtue of which contact with other cells inhibit their uncontrolled growth. Cancer cells lost this property.

Cancerous cells continue to divide giving rise to masses of cells called tumors. There are two kind so tumors-

Cancer detection and diagnosis-cancer detection is based on biopsy and histopathological study of the tissues, blood and bone marrow test for increased cell counts. Radiography, CT (computed tomography), MRI (magnetic resonance imaging) are very useful to cancers of internal organs.

Commonly abused drugs include opioids, cannabinoids and coca alkaloids obtained from flowering plants and a few from fungi.

Opioids are the drugs which bind to specific opioids receptors present in our central nervous system and gastrointestinal tract. Heroin commonly called smack is chemically diacetylmorphine which is a white, odourless, bitter crystalline compound. It is extracted from the latex of poppy plant (Papaversomniferum).Generally taken by snorting and injection, heroin is a depressant and slows down body functions.

Cannabinoids are a group of chemicals which interact with cannabinoid receptors present in the brain. Natural cannabinoids are obtained from the inflorescence of the plant cannabis sativa. They include marijuana, hashish, charas and gangja. They generally taken by inhalation and oral ingestion, these are known for their effects on cardiovascular system of the body.

Coca alkaloid or cocaine is obtained from coca plant Erythroxylum coca, native to South America. It interferes with the transport of the neuro-transmitter dopamine. Cocaine, commonly called coke or crack is usually snorted. It has a potent stimulating action on central nervous system, producing a sense of euphoria and increased energy.

Dependence is the tendency of the body to manifest a characteristic and unpleasant withdrawal syndrome if regular dose of drug/alcohol is abruptly discontinued that includes anxiety, shakiness, nausea and sweating.

Human Health and Disease class 12 Notes Biology. CBSE quick revision note for class-12 Chemistry Physics Math’s, Biology and other subject are very helpful to revise the whole syllabus during exam days. The revision notes covers all important formulas and concepts given in the chapter. Even if you wish to have an overview of a chapter, quick revision notes are here to do if for you. These notes will certainly save your time during stressful exam days.