Microbes are diverse-protozoa, bacteria, fungi and microscopic plants viruses, viroid and also prions that are proteinacious infectious agents. They are found everywhere on earth ranging from soil, air water and some inhabitable places.

Bacteria and fungi can be grown on nutritive media to form colonies, which can be seen by necked eyes and very useful in study of microorganisms.

Microbes cause many diseases in human beings, plants and animals. Several microorganisms are useful to man in diverse ways.

a. Microorganisms like Lactobacillus and other commonly called lactic acid bacteria (LAB) grow in milk and convert it to curd. The LAB produces acids that coagulate and partially digest the milk proteins. It also improves its nutritional quality by increasing vitamin B12.  In our stomach too, the LAB play very beneficial role in checking disease-causing microbes.

c. Cheese, is one of the oldest food items in which microbes were used. The large holes in ‘Swiss cheese’ are due to production of a large amount of CO2 by a bacterium named Propionibacterium sharmanii. The ‘Roquefort cheese’ is ripened by growing a specific fungus on them for a particular flavour.

a. Fermented Beverages- Saccharomyces cerevisiae used for bread-making and commonly called brewer’s yeast, is used for fermenting malted cereals and fruit juices, to produce beverages like wine, bear, whisky and rum.. Wine and bear are produced without distillation whereas whisky, brandy and rum are produced by distillation of the fermented broth. 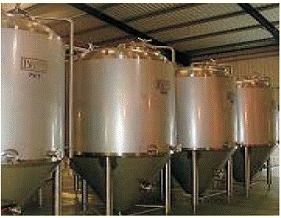 b. Antibiotics- they are chemical substances produced by some microbes and can kill or retard the growth of other microbes. Penicillin was first antibiotic to be discovered. Antibiotics have great improved our capacity to treat deadly diseases such as plague, whooping cough, diphtheria and leprosy.

Municipal waste water (sewage) contains large amount of organic matter and microbes which are pathogenic and cannot be discharged into natural water bodies like rivers and streams. 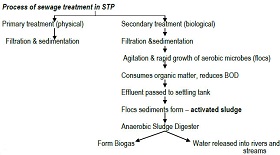 In primary treatment, floating debris is removed by sequential filtration. Grit (soil and small pebbles) are removed by sedimentation.

Secondary treatment or biological treatment involves passing of primary effluents in large aeration tank to help the growth of aerobic microbes into flocs (masses of bacteria associated with fungal filaments to form mesh like structures). These microbes increase the consumption of organic wastes and decrease the BOD (biological oxygen demand)of the effluents.

Sludge is passed into large tanks called anaerobic sludge digesters in which anaerobic bacteria digest the bacteria and fungi in the sludge and produce mixture of gas called biogas, which is a mixture of methane, hydrogen sulphide and carbon dioxide.

The effluents from the secondary treatment plant are released into water bodies.

Microbes in Production of Biogas

Biogas is a mixture of gases produced by the microbial activity that can be used as fuel. Certain bacteria that grows anaerobically on cellulosic material produce large amount of methane along with CO2and H2. These bacteria are collectively called methanogens (Methanobacterium). 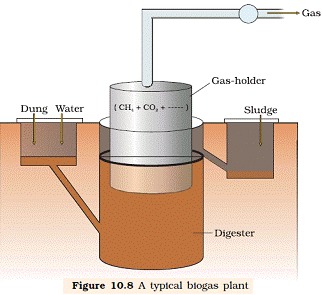 Biogas Plant – the excreta of cattle (gobar) is rich in methanogens bacteria and is used for generation of biogas also called as gobar gas.

Biogas plant consists of a concrete tank in which bio-wastes are collected and slurry of dung is fed.

A floating cover is placed over digester that moves upward when gas is produced. The gas produced is removed and supplied through an outlet pipe for consumption.

The spent slurry is removed through another outlet and used as fertilisers. Biogas plant is more often build in rural areas as large amount of cattle dug is available easily.

Biocontrol means use of biochemical method for controlling plant disease and pests. The chemical used as pesticides and insecticides are harmful to human beings and animals.

Biological control of pests and disease is a method of controlling pest on natural prediction rather than chemicals. The organic farmer creates a system where the pests are not eradicated but kept at manageable level by complex system of check and balance within the living and vibrant ecosystem. For example, the Ladybird and Dragonflies are used to get rid of aphids and mosquitoes respectively. On brassicas and fruit tree, to control butterfly caterpillars bacteria Bacillus thuringiensis is used.

Biological control developed for use in the treatment of plant disease is the fungus Trichoderma. Trichoderma are free-living fungi that are very common in the root systems that control several plant pathogens.

Bio fertilisers are organisms that enrich the nutrient quality of the soil. The main sources includes bacteria, fungi and cyanobacteria.

The root nodule formed by Rhizobium bacteria on root of leguminous plants increase the nitrogen level of soil, necessary for various metabolic processes. Azotobacter and Azospirillum are free living bacteria that live in soil and fix atmospheric nitrogen into organic forms.

Symbiotic association of fungi with angiosperm plants (mycorrhiza) also increase the fertility of soil. Glomus form mycorrhiza that absorbs phosphorus from the soil and passes it to the plant. These microbes also provide benefits like resistance to root-borne pathogens, tolerance to salinity and drought.

Microbes in Human Welfare class 12 Notes Biology. CBSE quick revision note for class-12 Chemistry Physics Math’s, Biology and other subject are very helpful to revise the whole syllabus during exam days. The revision notes covers all important formulas and concepts given in the chapter. Even if you wish to have an overview of a chapter, quick revision notes are here to do if for you. These notes will certainly save your time during stressful exam days.