CBSE guide notes are the comprehensive notes which covers the latest syllabus of CBSE and NCERT. It includes all the topics given in NCERT class 12 Biology textbook. Users can download CBSE guide quick revision notes from myCBSEguide mobile app and myCBSEguide website.


Genetics is the study of principles and mechanism of heredity and variation. Gregor Johann Mendel is known as ‘father of Genetics’.

Selection of pea plant: The main reasons for adopting garden pea (Pisum sativum) for experiments by Mendel were –

Working method: Mendel’s success was also due to his meticulous planning and method of work – 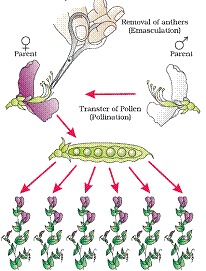 Inheritance of one gene (Monohybrid cross)

Mendel crossed tall and dwarf pea plant and collected all the seeds obtained from this cross. He grew all the seeds to generate plants of first hybrid generation called F1 generation. He observed that all the plants are tall. Similar observation was also found in other pair of traits.

Mendel self-pollinated the F1 plants and found that in F2 generation some plants are also dwarf. The proportion of dwarf plants is 1/4th and tall plants of 3/4th.

Test cross is the cross between an individual with dominant trait and a recessive organism in order to know whether the dominant trait is homozygous or heterozygous. 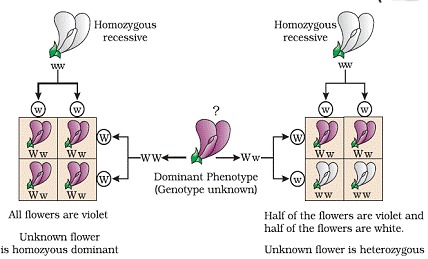 Principle or Law of Inheritance

Based on observations of monohybrid cross, Mendel proposed two law of inheritance-

1. Law of dominance– states that –

a. Characters are controlled by discrete units called factors.
b. Factors always occur in pair.
c. In a dissimilar pair of factors one member of pair dominate the other. 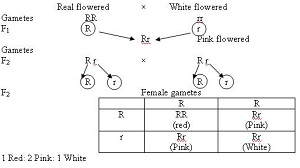 They are multiple forms of a medelian factor or gene which occur on the same gene locus distributed in different organisms in the gene pool with an organism carrying only two alleles and a gamete only one allele. ABO blood grouping also provides a good example of multiple alleles.

A cross made to study simultaneous inheritance of two pairs of mendelian factors of genes. 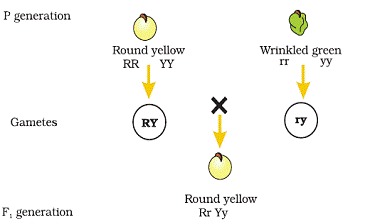 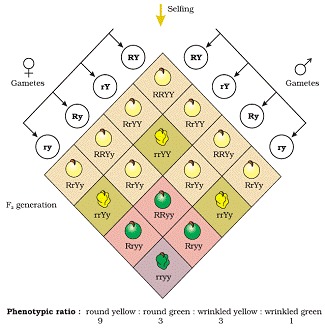 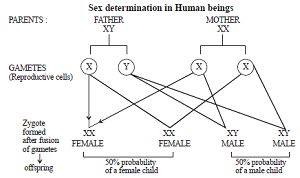 Mutationis a phenomenon which results in alternation of DNA sequence and consequently results in the change in the genotype and phenotype of an organism. The mutations that arise due to due to change in single base pair of DNA are called point mutation e.g Sickle cell anaemia.

They are transmitted as the affected individual is sterile.This is always dominant in nature.

a. Haemophilia- sex linked recessive disease in which, in an infected individual, a minor cut leads to non-stop bleeding. Heterozygous female (carrier) can transmit the disease to their son. The possibility of a female becoming a haemophilic is extremely rare because mother of such a female has to be at least carrier and the father should be haemophilic (unviable in the later stage of life). 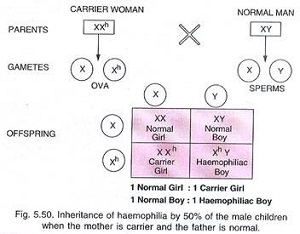 b. Sickle cell anemia- an autosome linked recessive trait in which mutant haemoglobin molecules undergo polymerization under low oxygen tension causing change in shape of the RBC from biconvex disc to elongated sickle like structure. The defect is caused by the substitution of Glutamic acid (Glu) by Valine (Val) at the sixth position of the beta globin chain of the haemoglobin molecule. The substitution of amino acid in the globin protein results due to the single base substitution at the sixth codon of the beta globin gene from GAG to GUG 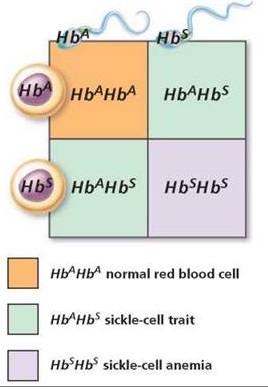 c. Phenylketonuria- inborn error of metabolism inherited as autosomal recessive trait. The affected individual lacks an enzyme that converts the amino acids phenylalanine to tyrosine . . As a result of this phenylalanine is accumulated and converted into phenylpyruvic acid and other derivatives that results into mental retardation.

a. Down’s Syndrome– is due to presence of additional copy of the chromosome number 21. The affected individual is short statured with small rounded head, furrowed tongue and partially opened mouth. Mental development is retarded.

b. Klinefleter’s Syndrome– due to presence of an additional copy of X-chromosome (XXY). Such persons have overall masculine development however, the feminine development (development of breast, i.e., Gynaecomastia) is also expressed. They are sterile.

c. Turner’s Syndrome– caused due to the absence of one of the X chromosome. 45 with XO, such females are sterile as ovaries are rudimentary. They lack secondary sexual characters. 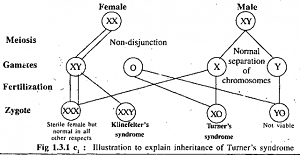 Principles of Inheritance and Variation class 12 Notes Biology. CBSE quick revision note for class-12 Chemistry Physics Math’s, Biology and other subject are very helpful to revise the whole syllabus during exam days. The revision notes covers all important formulas and concepts given in the chapter. Even if you wish to have an overview of a chapter, quick revision notes are here to do if for you. These notes will certainly save your time during stressful exam days.