Biodiversity or biological diversity is the occurrence of different types of ecosystems, different species of organisms and their variant like biotypes, ecotypes and gene adapted to different climates and environments of different regions including their interactions and processes.This term was coined by Edward Wilson.The vast array of species of micro-organisms, algae, fungi, plants and animals occurring on the earth either in the terrestrial or aquatic habitats and the ecological complexes of which they are a part comprises biodiversity . Diversity ranges from macromolecules to biomes.

The important diversity at the levels of biological organization are-

I. Genetic Diversity- a single species might show high diversity at the genetic level over its distributional range. Rauwolfia vomitoria shows genetic variation in terms of concentration and potency of chemical reserpine India has more than 50,000 genetically different strains of rice and 1000 varieties of mango. 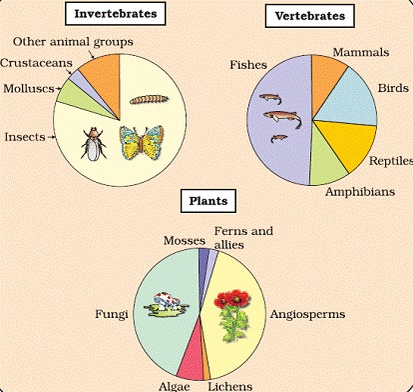 Biodiversity and its conservation are vital environmental issues of international concern as more and more people around the world begin to realize the critical importance of biodiversity for survival and well-being on this planet.

· According to the IUCN, the total number of plant and animal species described so far is about 1.5 million but still many species are yet to discovered and described.

· More than 70% of all the species recorded are animals while rest are plants including algae, fungi, bryophytes, gymnosperms and angiosperms. Among animals, 70% of total are insects.

· The number of fungi species in the world is more than the combined total of the species of fishes, amphibians, reptiles and mammals.

a) Latitudinal gradients- the diversity of plants and animals is not uniform throughout the world and shows uneven distribution. This distribution pattern is along the latitudinal gradient in diversity. Species diversity decreases as we move away from the equator towards the poles. Tropics harbor more species than temperate or polar areas.Amazonian Rainforest has the greatest biodiversity on earth. It has more than 40000 species of plants, 1,25,000 species of insects, 300 species of fish, 427 of amphibian and 378 of reptiles, 1300 species of birds and 427 of mammals. Various hypothesis has been proposed regarding this such as-

a) Speciation is a function of time unlike temperate regions subjected to frequent glaciation in past, tropical latitudes have remained relatively undisturbed for millions of years and thus had long evolutionary time for species diversification.

b) Tropical environments unlike temperate ones are less seasonal and more constant and predictable which promote niche specialization and lead to a greater species diversity.

c)There is more solar energy available in the tropics which contribute to higher productivity  this in turn contribute indirectly to greater diversity.

• Alexander Von Humboldt has observed that within a region, species richness gets increased when explored area is increased, but only up to a limit.
• The relationship between species richness and area for a number of taxa like angiospermic plants, fresh water fishes and birds is found to be a rectangular hyperbola. 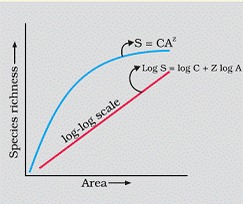 On logarithmic scale, the relationship is a straight line described by the equation-

The importance of Species Diversity to the Ecosystem

The communities with more species are generally more stable than those with less species. A stable community should not be show too much variation in productivity from year to year.

Rich biodiversity is essential for ecosystem health and imperative for the very survival of human race on this planet.

Rivet popper hypothesis – given by Paul Ehrlich. In an airplane (ecosystem) all parts are joined together using thousands of rivets (species). If every passenger travelling in it starts popping a rivet to take home (causing a species to become extinct), it may not affect flight safety (proper functioning of the ecosystem) initially, but as more and more rivets are removed, the plane becomes dangerously weak over a period of time. Furthermore, which rivet is removed may also be critical. Loss of rivets on the wings (key species that drive major ecosystem functions) is obviously a more serious threat to flight safety than loss of a few rivets on the seats or windows inside the plane

The biological wealth of our planets have been declining rapidly due to three factors – Population, Urbanisation and Industrialisation.The IUCN Red List (2004) documents the extinction of 784 species (including 338 vertebrates, 359 invertebrates and 87 plants) in the last 500 years. Some examples of recent extinctions include the dodo (Mauritius), quagga (Africa), thylacine (Australia), Steller’s Sea Cow (Russia) and three subspecies (Bali, Javan, Caspian) of tiger. In last 20 years, 27 species have been disappeared. In general, loss of biodiversity in a region may lead to

a. Decline in plant production

b. Lowered resistance to environmental perturbations, drought, and flood.

c. Increased variability in ecosystem processes such as productivity, water use, and pest and disease cycles.

Faster rates of species extinctions are largely due to human activities. The four major causes are called ‘The Evil Quartet’.

1) Habitat loss and fragmentation– is the most important cause of animals and plants extinction. The amazon rain forest (lungs of the planet) having millions of species is being cut and cleared for cultivating soya beans or for conversion to grasslands. When large habitats are broken up into small fragments due to various human activities, mammals are birds requiring large territories migrate and badly affected.

2) Over-exploitation–    When biological system is over exploited by man for the natural resources ,it results in degradation and extinction of the resources , e.g Steller’s sea cow, passenger pigeon etc. Many marine fish population are over harvested, endangering the continued existence of some important species.

3) Alien species invasions– when alien species enters intentionally or unintentionally, some of them turn invasive and cause decline or extinction of indigenous species.The Nile perch introduced into Lake Victoria in east Africa led eventually to the extinction of an ecologically unique assemblage of more than 200 species of cichlid fish in the lake. Invasive weeds species like carrot grass (parthenium), Lantana and water hyacinth causing threats to indigenous species.

We should conserve the biodiversity due to following groups of regions-

II. The Broadly Utilitarian– biodiversity plays a major role in ecosystem services that nature provides. Productions of Oxygen during photosynthesis, pollination without natural pollinator, pleasure from nature are priceless.

III. Ethical– for conserving biodiversity relates to what we own to millions of plants, animals and microbes species with whom we share this planet. Every species has an intrinsic value although it may not be of current or any economic value to us. It is our moral duty to care for their well-being and pass on our biological legacy in good order to future generations.

How do we conserve Biodiversity?

When whole ecosystem is conserved, all its biodiversity is also protected. There are two ways of conservation of biodiversity-

In situ ( on site) conservation– conservationists have identified for maximum protection certain ‘biodiversity hotspots’ regions with very high levels of species richness and high degree of endemism, species found in that region and not found anywhere else. There are 34 biodiversity hot spots in the world. These hotspots are also regions of accelerated habitat loss. India has 14 biosphere reserves, 90 national parks and 448 wildlife sanctuaries.

Ex situ (off site) conservation– in this method, threatened animals and plants are taken out from their natural habitat and placed in special setting when they be protected and given special care . Zoological parks, Botanical Gardens and wildlife safari parks are used for this purpose. Now gemetes of threatened species can be preserved in viable and fertile condition for long periods of time using cryopreservation technique. Eggs can be fertilized in vitro and plants can be propagated using tissue culture methods. 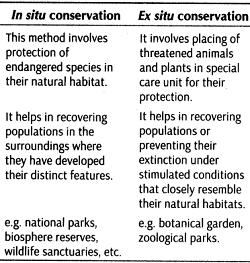 The historic convention on Biological Diversity (The Earth Summit) held in Rio de Janeiro in 1992,called upon all nations to take appropriate measures for conservation of biodiversity and the World Summit on  sustainable development held in 2002 in Johannesburg, South Africa, 190 countries pledged their commitment to achieve by 2010, a significant reduction in the current rate of biodiversity loss at global, regional and local levels.

Biodiversity and Conservation class 12 Notes Biology. CBSE quick revision note for class-12 Chemistry Physics Math’s, Biology and other subject are very helpful to revise the whole syllabus during exam days. The revision notes covers all important formulas and concepts given in the chapter. Even if you wish to have an overview of a chapter, quick revision notes are here to do if for you. These notes will certainly save your time during stressful exam days.