Ecology is the branch of biology that deals with the interactions among organisms and between the organism and its physical (abiotic) environment . Study of ecology is important to strike a balance between development and maintenance of natural environmental and biotic communities, use and conservation of resources, solve local , regional and global environmental problems. 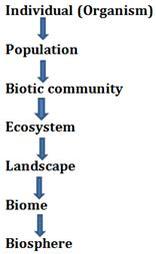 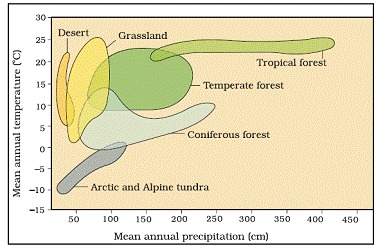 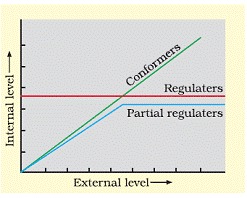 Adaptation is the attribute of organism morphological, physiological and behavioral changes that enables the organism to survive and reproduce in its habitat.

Populations: Individuals of any species live in groups in well-defined geographical area, share or compete for similar resources, potentially interbreed and constitute a population.

§ Population size or population density (N) is measured in terms of number but it may sometime not appropriate.

Population Growth : The size of population is not static. It keeps changing with time, depending upon food availability, predation pressure and reduces weather. The main factors that determine the population growth are-

o Emigration ( individual of population that have left the habitat ) 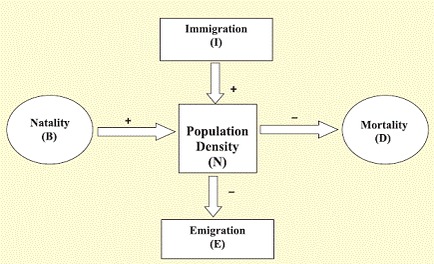 If ‘N’ is the population density at a time‘t’, then its density at time t+1 is

Growth of population takes place according to availability of food, habit condition and presence of other biotic and abiotic factors. There are two main types of models-

i. Exponential Growth- in this kinds of growth occurs when food and space is available in sufficient amount. When resources in the habitat are unlimited, each species has the ability to realise fully its innate potential to grow in number .The population grows in an exponential or geometric fashion. If in a population of size N, the birth rates as represented as ‘b’ and death rate as ‘d’. Then increase and decrease in N during unit period time ‘t’ will be

Then, the r in this equation is called ‘intrinsic rate of natural increase’. 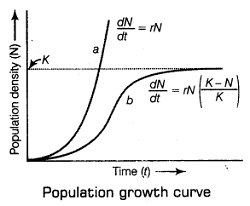 ii. Logistic Growth- there is a competition between the individuals of a population for food and space. The fittest organism survives and reproduces. In this types of growth initially shows a leg phase followed by phases of acceleration and de-acceleration.

K = Carrying capacity
Since resources for growth for populations are finite and become limiting , the logistic growth model is considered a more realistic one.

All animals, plants and microbes in a biological community interact with each other. These interactions may be beneficial, detrimental or neutral to one of species or both. Following types of interaction is seen-

PREDATION : It is an Interspecific Interaction where one animal kills and consumes the other weaker animal.
Roles of Predators

Interaction either among individuals of same species or between individuals of different species.
Occurs among closely related species but not always true

1. Unrelated species also compete- flamingo & fish compete for zooplankton
2. Feeding efficiency of a species reduce due to other species even if resources are plenty – Abingdon tortoise.

“Two closely related species competing for same resources cannot coexist as the competitively inferior one will be eliminated.”

It is the interaction where one species (parasite) depends on the other species (host) for food and shelter, host is harmed.

ENDOPARASITES–take shelter within the body of the host organism
Example – Liverfluke, Plasmodium

It is interaction in which both the interacting species are benefited
Examples
1. Lichen – fungi and algae
2. Mycorrhizae – fungi and roots of higher plants
3. Pollination of plants by insects
4. Mediterranean orchid- sexual deceit for pollination- appears as female bee

AMENSALISM: Interaction between two different species, in which one species is harmed and the other species is neither harmed nor benefited. Example.  Bacterial culture, after few days fungus growth will be there on it like Pencillium, and its secretions of chemical will kill bacteria, but no benefits to fungi.

Organisms and Populations class 12 Notes Biology. CBSE quick revision note for class-12 Chemistry Physics Math’s, Biology and other subject are very helpful to revise the whole syllabus during exam days. The revision notes covers all important formulas and concepts given in the chapter. Even if you wish to have an overview of a chapter, quick revision notes are here to do if for you. These notes will certainly save your time during stressful exam days.