Flower is a modified stem which functions as a reproductive organ and produces ova and/or pollen. A typical angiospermic flower consists of four whorls of floral appendages attached on the receptacle: calyx, corolla, androecium (male reproductive organ consisting of stamens) and gynoecium (composed of ovary, style and stigma) . 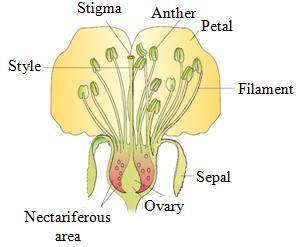 • Several structural and hormonal changes lead to formation and development of the floral primordium. Inflorescence is formed that bears floral buds and then flower.

• In flowers, male (androecium) and female (gynoecium) differentiate and develops in which male and female gametes are produced.

• The anther is four-sided structure consisting of four microsporangia, two in each lobes. 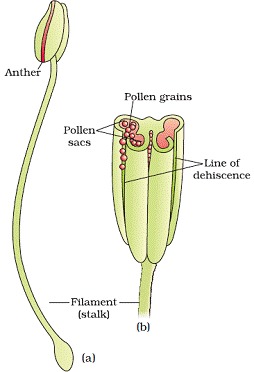 • Sporogenous tissues- It is compactly arranged homogenous cells which are present at centre of each microsporangium when the anther is young..

• The cells of sporogenous tissues undergo meiotic division to form microspore tetrad. As the anther mature and dehydrate, the microspore dissociate and develops into pollen grains. 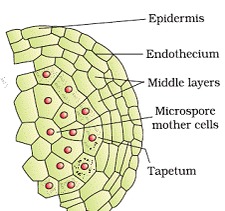 Pollen grain represents the male gametophytes. Pollen grains are made of 2 layered Wall,

1. Exine :- Made of sporopollenin- most resistant organic matter known.It can withstand high temperatures and strong acids and alkali. No enzyme can degrade sporopollenin

2. Intine :-
-Thin and continuous layer
– Made of cellulose and pectin

• Pollen grains are rich in nutrients and are used as pollen tablets as food supplements.

• Viability of pollen grain varies with species to species and should land on stigma before this period to germinate. Pollen grains of large number of species are stored in liquid nitrogen at temperature – 1960, called pollen bank.

• Gynoecium may consists of single pistil (monocarpellary) or more than one pistil (polycarpellary) which may be fused (syncarpous) or free (apocarpous). 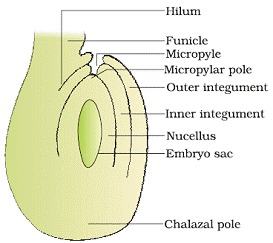 Ovule differentiates a single megaspore mother cell (MMC) in the micropylar region of nucellus. MMC undergoes meiotic division that results into the production of four megaspores.

• In most of the flowering plants three megaspores degenerate. 1megaspore develops into female gametophyte (embryo sac).

• Six of the eight nuclei surrounded by cell wall and remaining two nuclei (polar nuclei) are situated below the egg apparatus. 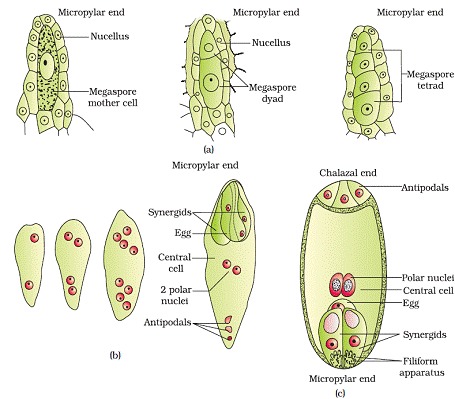 Pollination – transfer of pollen grains from anther to stigma.

a) Autogamy– transfer of pollen grain from anther to stigma of same flower.

b) Geitonogamy – transfer of pollen grains from anther to stigma of different flower of same plant. Geitonogamy is functionally cross-pollination involving a pollinating agent, genetically it is similar to autogamy since the pollen grains come from the same plant

Adaptations in flowers for Pollination

Main features of wind and water pollinated plants
– produce pollen grains in large no.
– do not produce nectar 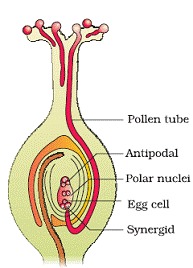 • Anther and stigma are placed at different position.

Double Fertilisation- after entering the one of the synergids, each pollen grain releases two male gametes. One male gametes fuse with egg (Syngamy) and other male gametes fuse with two polar nuclei (triple fusion) to produce triploid primary endosperm nucleus (PEN). Since two types of fusion takes place in an embryo sac the phenomenon is called double fertilisation. The PEN develops into the endosperm and zygote develops into embryo.

Post fertilisation events include endosperm and embryo development, maturation of ovules into seeds and ovary into fruits.

Embryo- Embryo develops at the micropylar end of the embryo sac where the zygote is located.

Embryogeny – early stages of embryo development.The zygote gives rise to the proembryo and subsequently to the globular, heart-shaped and mature embryo.

Polyembryony
– Occurrence of more than one embryo in a seed
– Often associated with apomixes. Ex: Citrus, groundnut

CBSE quick revision note for class-12 Chemistry Physics Math’s, Biology and other subject are very helpful to revise the whole syllabus during exam days. The revision notes covers all important formulas and concepts given in the chapter. Even if you wish to have an overview of a chapter, quick revision notes are here to do if for you. These notes will certainly save your time during stressful exam days.