CBSE guide notes are the comprehensive notes which covers the latest syllabus of CBSE and NCERT. It includes all the topics given in NCERT class 11 Geography text book. Users can download CBSE guide quick revision notes from myCBSEguide mobile app and my CBSE guide website.

EVIDENCES TO SUPPORT THE CONTINENTAL DRIFT
1. The matching of continents (jig-saw fit)
A. the shorelines of S. America and Africa have remarkable match
B. a map was produced by Bullard in 1964 to show the jigsaw fit of these two continents.
C. it was fit around 1000 fathom line of the shoreline

2. ROCKS OF SAME AGE ACROSS THE OCEANS
A. the belt of ancient rocks of 2000 my from Brazil coast matches with those of Western Africa
B. Marine deposits of South America and Africa belong to Jurassic age.

3. TILLITE
A. sedimentary rock formed out of glacial deposits
B. sediments from India have similar counter parts at different continents of south.
C. tillile indicates prolonged glaciations
D. The same glaciations is found in Africa, Falklands, Madagascar, Antarctica and Australia
E. the glacial tillite indicates that unambiguous evidence of palaeo climates and drifting of continents.

4. PLACER DEPOSITS
a. Formation of placer deposits of gold in Ghana coast has no source rock.
a. The gold bearing veins of rocks are found in Brazil

5. DISTRIBUTION OF FOSSILS
• Identical species of animals and plants are found along the coastal regions of the different continents.
• lemurs occurs in India, Madagascar and Africa.
• The contiguous Land mass was called LEMURIA
• the fossils of mesosaurus were found in only South Africa and Brazil.

FORCES FOR DRIFTING THE CONTINENTS
1. Wegner suggested that the movement responsible for the drifting of the continents was caused by
A. POLAR FLEEING FORCE B. TIDAL FORCE 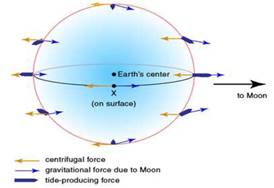 TIDAL FORCE
Wegener suggested that these two forces are responsible for the movement of plates.
Most of the scholars consider that these forces are not sufficient to move the plates.

Convectional current theory
It was proposed by ARTHUR HOLMES IN 1930 Due to difference in the temperature currents are formed due to disintegration of radioactive materials inside the earth. 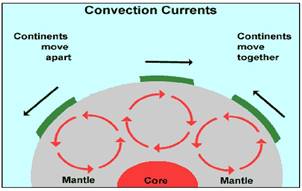 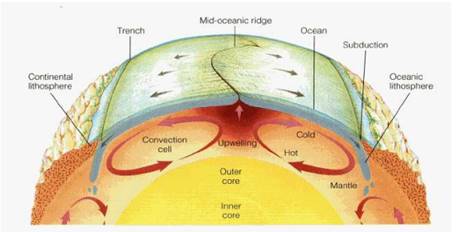 MAPPING OCEAN FLOOR
1. Existence of ridges and deep trenches nearby continental margins
2. Mid oceanic ridge is the most active for volcanic eruptions
3. The ocean floor is much younger than the continents
4. Rocks of equal distance of the ridge have similar chemical composition and age 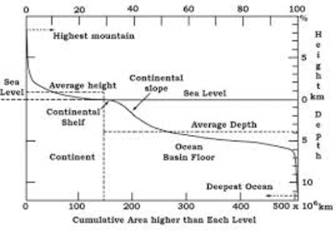 The ocean floor is segmented into three major divisions Based on depth and configuration
1. Continental margins
a. Form transitional zone between continental shore and deep sea basins
b. They include continental slope, shelf, continental rise and deep oceanic trenches ABYSSAL PLAINS 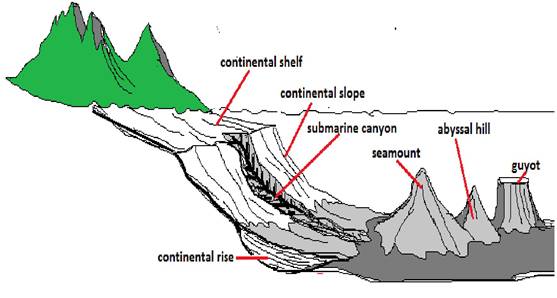 DISTRIBUTION OF VOLCANOES AND EARTHQUAKES
1. all volcanoes and earthquakes are paralle to the coast
2. this line also coinsides with mid- atalantic ridge
3. alpine hymalayan system
4. around the pacific ocean it is called ring of fire Mid oceanic ridges

1. Interconnected mountain system within the ocean
2. Longest mountain chain in the ocean floor
3. Consist of central rift system at the crust
4. Intense volcanic activity is found

PLATE TECTONICS
1. The theory of plate tectonics was introduced by McKenzie, parker and Morgan in 1967
2. A tectonic plate is also called as lithosphere plate
3. It is a massive irregularly shaped slab of solid rock
4. Consists of oceanic and continental sphere
5. Plates move horizontally over the Asthenosphere
6. Average thickness is 100 km of oceanic part and 200 km continental part
7. It may be oceanic or continental
8. Pacific plate is largest oceanic plate where as Eurasian plate is the largest continental plate 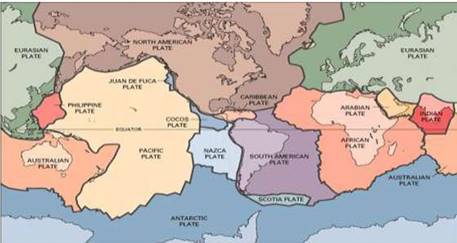 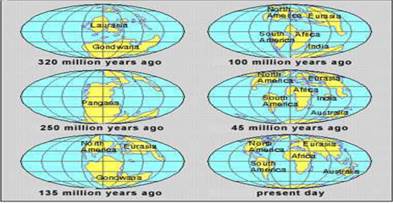 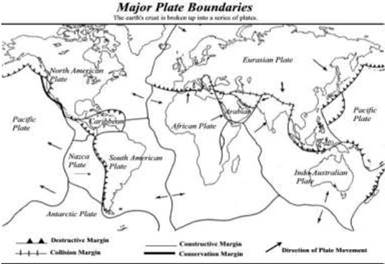 1. Cocos
Plate 2. Nazca Plate 3. Arabian Plate 4. Philippine Plate 5. Caroline Plate 6. Fuji Plate
These plates are moving constantly throughout geological time not the continent believed by Wegener Pangaea was the convergent of all the plates
Position of Indian subcontinent is traced with the help of rocks analyzed from Nagpur area

TYPES OF PLATE BOUNDARIES
I. DIVERGENT BOUNDARIES
1. New crust is generated 2. plates move away from each other
2. These are called spreading sites 3. Ex. Mid Atlantic ridge

II. CONVERGENT BOUNDARY
1. Crust is destroyed
2. sinking of plate is called ‘subduction zone’
3. There are three ways in which subduction occurs

III TRANSFORM BOUNDARIES
1. Crust is neither produced nor destroyed
2. Plates slide horizontally
3. Perpendicular to the mid oceanic ridges
4. Differential movement of a plate at the same time
5. Rotation of the earth has its effect on this movement

RATES OF PLATE MOVEMENT
1. The strips of normal and reverse magnetic field helped the scientists to study the rate of plate movement
2. Arctic ridge has the slowest rate less than 2.5 cm /year east pacific rise has more than
3. 15 cm/year

FORCES OF THE PLATE MOVEMENT
1. Surface of the earth is dynamic
2. Interior is always mobile
3. Beneath the lithosphere there is always movement of magma horizontally
4. Heated material rises to the top and cooled material sinks down
5. This cycle is repeated over the time and form convection cells

SOURCES OF HEAT
A. Residual heat b. Radioactive decay
6. It was first considered by Arthur Holmes in 1930
7. Later it also influenced Harry Hess

MOVEMENT OF INDIAN PLATE
1. Indian plate includes India and Australia
2. Northern boundary is along the Himalayas
3. It is the place of continental convergence
4. In the east it extends up to Rakinyoma mountains of Myanmar
5. Eastern margin is spreading site
6. Western margin extends along Kirthar mountains, Makran coast red sea rift.
7. The boundary between India and Antarctica is called divergent boundary
8. Till 225 m y a India was separated by Tethys sea
9. About 200 m y a India started its journey towards north
10. India collided with Asia about 40-50 m y a and caused the upliftment of Himalayas
11. About 140 m y a the position of Indian plate is at 50°s latitude
12. During the movement of Indian plate two events occurred in India
13. A. out pouring of lava and formation of Deccan plateau
B. Subsidence of west coast
14. The Himalayas started rising about 40 m y a 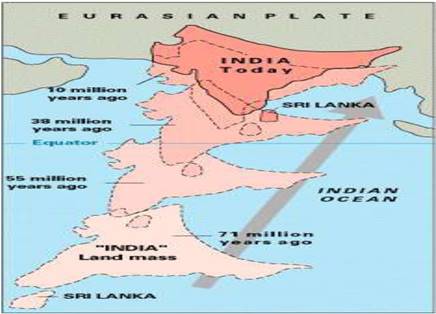 Distribution of Oceans and Continent class 11 Notes Geography. CBSE quick revision note for class-11 Mathematics, Physics, Chemistry, Biology and other subject are very helpful to revise the whole syllabus during exam days. The revision notes covers all important formulas and concepts given in the chapter. Even if you wish to have an overview of a chapter, quick revision notes are here to do if for you. These notes will certainly save your time during stressful exam days.