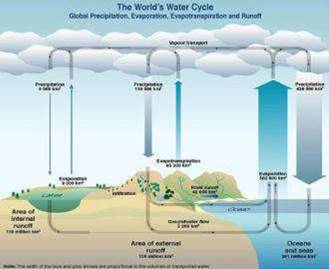 The earth, fortunately, has an abundant supply of water on its surface. Hence, our planet is called the ‘Blue Planet’.
HYDROLOGICAL CYCLE The hydrological cycle, is the circulation of water within the earth’s hydrosphere in different forms i.e. the liquid, solid and the gaseous phases. It also refers to the continuous exchange of water between the oceans,

1. What is the % of water in the oceans?
2. Which component of the earth consists of least percentage of water content?
3. what is the main use of soil moisture?
Table 13.1: Water on the Earth’s surface

Table 13.2: Components and Processes of the Water Cycle

Study above table and answer the questions that fallow
1. What do you mean by evapotranspiration?
2. What are the different forms of water in the atmosphere?
The above table shows the distribution of water on the surface of the earth. About 71 percent of the planetary water is found in the oceans. The remaining is held as freshwater in glaciers and icecaps, groundwater sources, lakes, soil moisture, atmosphere, streams and within life. Nearly 59 percent of the water that falls on land returns to the atmosphere through evaporation from over the oceans as well as from other places. The remainder runs-off on the surface, infiltrates into the ground or a part of it becomes glacier. It is to be noted that the renewable water on the earth is constant while the demand is increasing tremendously. This leads to water crisis in different parts of the world — spatially and temporally. The pollution of river waters has further aggravated the crisis. How can you intervene in improving the water quality and augmenting the available quantity of water?

RELIEF OF THE OCEAN FLOOR 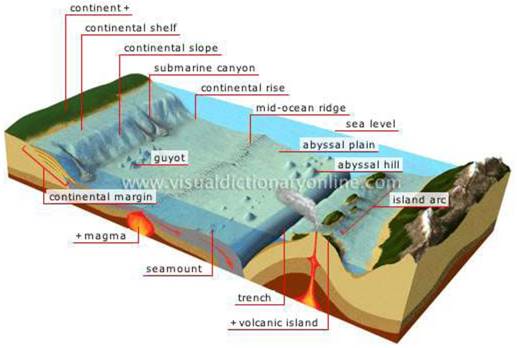 1. The continental shelf is the extended margin of each continent occupied by relatively shallow seas and gulfs.
2. It is the shallowest part of the ocean showing an average gradient of 1° or even less.
3. The shelf typically ends at a very steep slope, called the shelf break.
4. The width of the continental shelves vary from one ocean to another.
5. The average width of continental shelves is about 80 km.
6. The shelves are almost absent or very narrow along some of the margins like the coasts of Chile, the west coast of Sumatra, etc.
7. On the contrary, the Siberian shelf in the Arctic Ocean, the largest in the world, stretches to 1,500 km in width.
8. The depth of the shelves also varies. It may be as shallow as 30 m in some areas while in some areas it is as deep as 600 m.
9. The continental shelves are covered with variable thicknesses of sediments brought down by rivers, glaciers, wind, from the land and distributed by waves and currents. 10. Massive sedimentary deposits received over a long time by the continental shelves, become the source of fossil fuels.

1. Deep sea plains are gently sloping areas of the ocean basins.
2. These are the flattest and smoothest regions of the world.
3. The depths vary between 3,000 and 6,000 m.
4. These plains are covered with fine-grained sediments like clay and silt.

1. These areas are the deepest parts of the oceans.
2. The trenches are relatively steep-sided, narrow basins.
3. They are some 3-5 km deeper than the surrounding ocean floor.
4. They occur at the bases of continental slopes and along island arcs and are associated with active volcanoes and strong earthquakes.
5. That is why they are very significant in the study of plate movements. 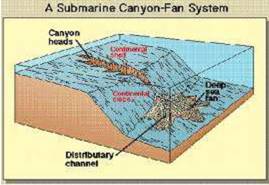 6. As many as 57 deeps have been explored so far; of which 32 are in the Pacific Ocean; 19 in the Atlantic Ocean and 6 in the Indian Ocean.

1. A mid-oceanic ridge is composed of two chains of mountains separated by a large depression.
2. The mountain ranges can have peaks as high as 2,500 m and some even reach above the ocean’s surface.
3. Iceland, a part of the mid Atlantic Ridge, is an example.

It is a mountain with pointed summits, rising from the seafloor that does not reach the surface of the ocean. Seamounts are volcanic in origin. These can be 3,000-4,500 m tall. The Emperor seamount, an extension of the I Hawaiian Islands in the Pacific Ocean, is a good example.
Submarine Canyons These are deep valleys, some comparable to the Grand Canyon of the Colorado river. They are sometimes found cutting across the continental shelves and slopes, often extending from the mouths of large rivers. The Hudson Canyon is the best-known submarine canyon in the world.

It is a flat-topped seamount. They show evidences of gradual subsidence through stages to become flat-topped submerged mountains. It is estimated that more than 10,000 seamounts and guyots exist in the Pacific Ocean alone.

These are low islands found in the tropical oceans consisting of coral reefs surrounding a central depression. It may be a part of the sea (lagoon), or sometimes form enclosing a body of fresh, brackish, or highly saline water. 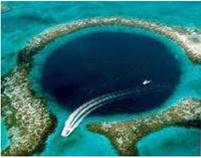 Ocean waters get heated up by the solar energy just as land.
The process of heating and cooling of the oceanic water is slower than land.

Factors Affecting Temperature Distribution ON THE OCEANS
The factors which affect the distribution of temperature of ocean water are:
(i) Latitude: the temperature of surface water decreases from the equator towards the poles because the amount of insolation decreases pole ward.
(ii) Unequal distribution of land and water: the oceans in the northern hemisphere receive more heat due to their contact with larger extent of land than the oceans in the southern hemisphere.
(iii) Prevailing wind: the winds blowing from the land towards the oceans drive warm surface water away form the coast resulting in the upwelling of cold water from below. It results into the longitudinal variation in the temperature. Contrary to this, the onshore winds pile up warm water near the coast and this raises the temperature.
(iv) Ocean currents: warm ocean currents raise the temperature in cold areas while the cold currents decrease the temperature in warm ocean areas. Gulf stream (warm current) raises the temperature near the eastern coast of North America and the West Coast of Europe while the Labrador current (cold current) lowers the temperature near the north-east coast of North America.
(v) Horizontal and Vertical Distribution of Temperature
The temperature-depth profile for the ocean water shows how the temperature decreases with the increasing depth. The profile shows a boundary region between the surface waters of the ocean and the deeper layers. The boundary usually begins around 100 – 400 m below the sea surface and extends several hundred of metres downward. This boundary region, from where there is a rapid decrease of temperature, is called the thermocline.
About 90 percent of the total volume of water is found below the thermocline in the deep ocean.
In this zone, temperatures approach 0° C. The temperature structure of oceans over middle and low latitudes can be described as a three-layer system from surface to the bottom.
The first layer represents the top layer of warm oceanic water and it is about 500m thick with temperatures ranging between 20° and 25° C. This layer, within the tropical region, is present throughout the year but in mid -latitudes it develops only during summer.
The second layer called the thermocline layer lies below the first layer and is characterized by rapid decrease in temperature with increasing depth. The thermocline is 500 -1,000 m thick.
The third layer is very cold and extends up to the deep ocean floor.
In the Arctic and Antarctic circles, the surface water temperatures are close to 0° C and so the temperature change with the depth is very slight. Here, only one layer of cold water exists, which extends from surface to deep ocean floor.

Salinity is the term used to define the total structurecontent of dissolved salts in sea water It is calculated as the amount of salt (in gm) dissolved in 1,000 gm (1 kg) of seawater. It is usually expressed as parts per thousand (o/) or ppt. Salinity is an important property of sea water. Salinity of 24.7°/oo has been considered as the upper limit to demarcate ‘brackish water’.

(i) The salinity of water in the surface layer of oceans depend mainly on evaporation and precipitation.
(ii) Surface salinity is greatly influenced in coastal regions by the fresh water flow from rivers, and in polar regions by the processes of freezing and thawing of ice.
(iii) Wind, also influences salinity of an area by transferring water to other areas.
(iv) The ocean currents contribute to the salinity, temperature , nd density of water are interrelated. Henc

Any change in the temperature or density influences the salinity of water in an area.
Table 13.4: Dissolved salts in Sea water (gm of salt per kg of Water) 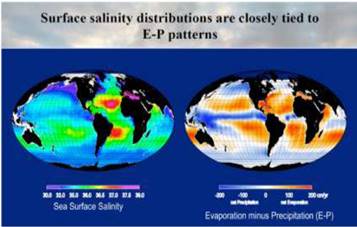 The salinity for normal open ocean ranges between 33 o/oo. and 37 o/oo. In the land locked Red Sea, it is as high as 41 o/00 while in the estuaries and the Arctic, the salinity fluctuates from 0 – 35 o/oo, seasonally. In hot and dry regions, where evaporation is high, the salinity sometimes reaches to 70 o/
The salinity variation in the Pacific Ocean is mainly due to its shape and larger areal extent. Salinity decreases from 35 o/oo on the western parts of the northern hemisphere because of the influx of melted water from the Arctic region. In the same way, after 15° – 20° south, it decreases to 33 – 31 o/oo The average salinity of the Atlantic Ocean is around 36 0/00 The highest salinity is recorded between 15° and 20° latitudes.
Maximum salinity (37 o/oo.) is observed between 20° N and 30° N and 20° W – 60° W. It gradually decreases towards the north. The North Sea, in spite of its location in higher latitudes, records higher salinity due to more saline water brought by the North Atlantic Drift. Baltic Sea records low salinity due to influx of river waters in large quantity. The Mediterranean records higher salinity due to high evaporation.

1. Salinity changes with depth, but the way it changes depends upon the location of the sea.
2. Salinity at the surface increases by the loss of water to ice or evaporation, or decreased by the input of fresh waters, such as from the rivers.
3. Salinity at depth is very much fixed, because there is no way that water is ‘lost’, or the salt is ‘added.’
4. There is a marked difference in the salinity between the surface zones and the deep zones of the oceans.
5. The lower salinity water rests above the higher salinity dense water.
6. Salinity, generally, increases with depth and there is a distinct zone called the halocline, where salinity increases sharply. Other factors being constant, increasing salinity of sea water causes its density to increase. High salinity sea water, generally, sinks below the lower salinity water. This leads to stratification by salinity.

Water oceans class 11 Notes Geography. CBSE quick revision note for class-11 Mathematics, Physics, Chemistry, Biology and other subject are very helpful to revise the whole syllabus during exam days. The revision notes covers all important formulas and concepts given in the chapter. Even if you wish to have an overview of a chapter, quick revision notes are here to do if for you. These notes will certainly save your time during stressful exam days.