This chapter deals with Humidity, types of humidity, relative humidity, absolute humidity, specific humidity, dew point, condensation, saturated air, types of precipitation -dew, frost, fog, mist, clouds cirrus, cumulus, stratus, nimbus, precipitation, types-(rainfall, sleet, snowfall, hailstones,)rainfall types convectional type, orographic rainfall, cyclonic rainfall, world distribution of rainfall.
Air contains water vapour. It varies from zero to four percent by volume of the atmosphere and plays an important role in the weather phenomena. Water is present in the atmosphere in three forms namely – gaseous, liquid and solid.
The moisture in the atmosphere is derived from water bodies through evaporation and from plants through transpiration. Thus, there is a continuous exchange of water between the atmosphere, the oceans, and the continents through the processes of evaporation, transpiration, condensation, and precipitation.
Water vapour present in the air is known as humidity. It is expressed quantitatively in different ways.
The actual amount of the water vapour present in the atmosphere is known as the absolute humidity.
It is the weight of water vapour per unit volume of air and is expressed in terms of grams per cubic metre.
The ability of the air to hold water vapour depends entirely on its temperature. The absolute humidity differs from place to place on the surface of the earth.
The percentage of moisture present in the atmosphere as compared to its full capacity at a given temperature is known as the relative humidity.
The air containing moisture to its full capacity at a given temperature is said to be saturated.
The temperature at which saturation occurs in a given sample of air is known as dew point.

WATER IN THE ATMOSPHERE EVAPORATION AND CONDENSATION

The amount of water vapour in the atmosphere is added or withdrawn due to evaporation and condensation respectively.
Evaporation is a process by which water is transformed from liquid to gaseous state. Heat is the main cause for evaporation.

latent heat of vaporization.
Hence, the greater the movement of air, the greater is the evaporation.
The transformation of water vapour into water is called condensation. Condensation is caused by the loss of heat. When moist air is cooled, it may reach a level when its capacity to hold water vapour ceases. Then, the excess water vapour condenses into liquid form. If it directly condenses into solid form, it is known as sublimation.
In free air, condensation results from cooling around very small particles termed as hygroscopic condensation nuclei. Particles of dust, smoke and salt from the ocean are particularly good nuclei because they absorb water. 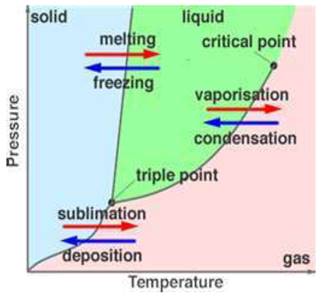 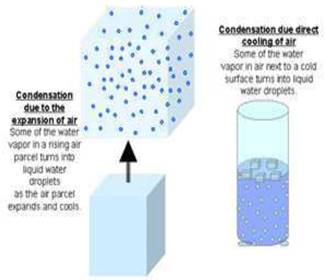 Dew
When the moisture is deposited in the form of water droplets on cooler surfaces of solid objects (rather than nuclei in air above the surface) such as stones, grass blades and plant leaves, it is known as dew. 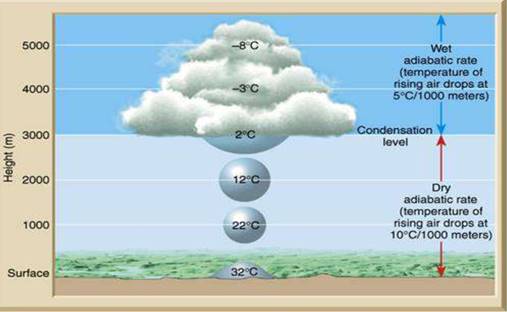 The ideal conditions for its formation are
1. clear sky,
2. calm air,
3. high relative humidity,
4. cold and long nights.
For the formation of dew, it is necessary that the dew point is above the freezing point.

When the temperature of an air mass containing a large quantity of water vapour falls all of a sudden, condensation takes place within itself on fine dust particles. So, the fog is a cloud with its base at or very near to the ground. Because of the fog and mist, the visibility becomes poor to zero. In urban and industrial centres smoke provides plenty of nuclei which help the formation of fog and mist. Such a condition when fog is mixed with smoke is described as smog.
The only difference between the mist and fog is that mist contains more moisture than the fog. In mist each nuclei contains a thicker layer of moisture. Mists are frequent over mountains as the rising warm air up the slopes meets a cold surface. Fogs are drier than mist and they are prevalent where warm currents of air come in contact with cold currents. Fogs are mini clouds in which condensation takes place around nuclei provided by the dust, smoke, and the salt particles. 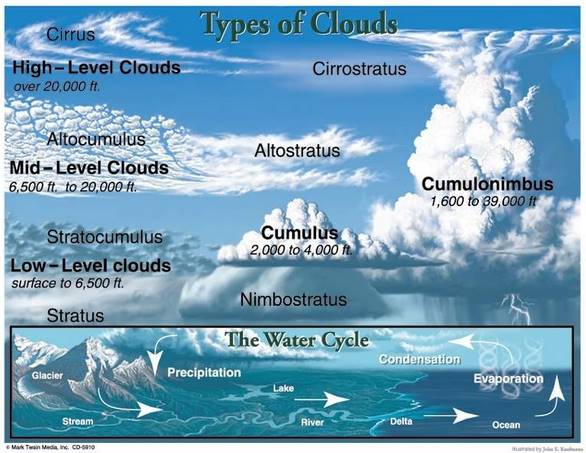 Cloud mass is a of minute water droplets or tiny crystals of ice formed by the condensation of the water vapour in free air at considerable elevations. As the clouds are formed at some height over the surface of the earth, they take various shapes. According to their height, expanse, density and transparency or opaqueness clouds are grouped under four types:
(i) cirrus; (ii) cumulus; (iii) stratus; (iv) nimbus.

Cirrus clouds are formed at high altitudes(8,000 – 12, 000 m). They are thin and detached clouds having a feathery appearance. They are always white in colour.

Cumulus clouds look like cotton wool. They are generally formed at a height of 4,000 -7,000 m. They exist in patches and can be seen scattered here and there. They have a flat base.

As their name implies, these are layered clouds covering large portions of the sky. These clouds are generally formed either due to loss of heat or the mixing of air masses with different temperatures.

Nimbus clouds are black or dark gray. They form at middle levels or very near to the surface of the earth. These are extremely dense and opaque to the rays of the sun. Sometimes, the clouds are so low that they seem to touch the ground. Nimbus clouds are shapeless masses of thick vapour.
A combination of these four basic types can give rise to the following types of clouds: high clouds –
cirrus, cirrostratus, cirrocumulus;
middle clouds – altostratus and altocumulus;
low clouds- stratocumulus and nimbostratus
and clouds with extensive vertical development – cumulus and cumulonimbus.

The process of continuous condensation in free air helps the condensed particles to grow in size. When the resistance of the air fails to hold them against the force of gravity, they fall on to the earth’s surface. So after the condensation of water vapour, the release of moisture is known as precipitation. This may take place in liquid or solid form.
The precipitation in the form of water is called rainfall, when the temperature is lower than the 0 C, precipitation takes place in the form of fine flakes of snow and is called snowfall.
Moisture is released in the form of hexagonal crystals. These crystals form flakes of snow. Besides rain and snow, other forms of precipitation are sleet and hail, though the latter are limited in occurrence and are sporadic in both time and space.
Sleet is frozen raindrops and refrozen melted snow-water. When a layer of air with the temperature above freezing point overlies a subfreezing layer near the ground, precipitation takes place in the form of sleet. Raindrops, which leave the warmer air, encounter the colder air below. As a result, they solidify and reach the ground as small pellets of ice not bigger than the raindrops from which they are formed.
Sometimes, drops of rain after being released by the clouds become solidified in to small rounded solid pieces of ice and which reach the surface of the earth are called hailstones.
These are formed by the rainwater passing through the colder layers. Hailstones have several concentric layers of ice one over the other.

On the basis of origin, rainfall may be classified into three main types –
1. the convectional,
2. orographic or relief and
3. the cyclonic or frontal.

The, air on being heated, becomes light and rises up in convection currents. As it rises, it expands and loses heat and consequently, condensation takes place and cumulous clouds are formed. With thunder and lightening, heavy rainfall takes place but this does not last long. Such rain is common in the summer or in the hotter part of the day. It is very common in the equatorial regions and interior parts of the continents, particularly in the northern hemisphere. 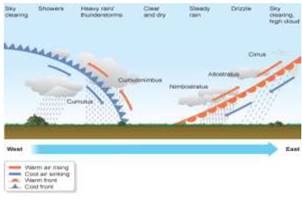 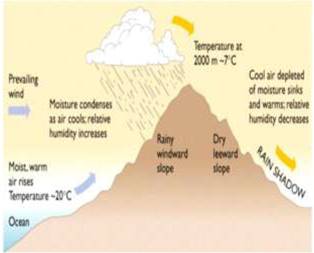 When the saturated air mass comes across a mountain, it is forced to ascend and as it rises, it expands; the temperature falls, and the moisture is condensed. The chief characteristic of this sort of rain is that the windward slopes receive greater rainfall. After giving rain on the windward side, when these winds reach the other slope, the descend, and their temperature rises. Then their capacity to take in moisture increases and hence, these leeward slopes remain rainless and dry. The area situated on the leeward side, which gets less rainfall is known as the rain-shadow area. It is also known as the relief rain. Cyclonic Rain World Distribution of Rainfall 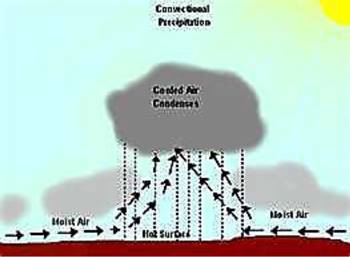 Different places on the earth’s surface receive different amounts of rainfall in a year and that too in different seasons.
1. In general, as we proceed from the equator towards the poles, rainfall goes on decreasing steadily.
2. The coastal areas of the world receive greater amounts of rainfall than the interior of the continents.
3. The rainfall is more over the oceans than on the landmasses of the world because of being great sources of water.
4. Between the latitudes 35 and 40 N and S of the equator,
5. the rain is heavier on the eastern coasts and goes on decreasing towards the west.
6. But, between 45 and 65 N and S of equator, due to the westerlies, the rainfall is first received on the western margins of the continents and it goes on decreasing towards the east.
7. Wherever mountains run parallel to the coast, the rain is greater on the coastal plain, on the windward side and it decreases towards the leeward side.

ON THE BASIS OF THE TOTAL AMOUNT OF ANNUAL PRECIPITATION, MAJOR PRECIPITATION REGIMES OF THE WORLD ARE IDENTIFIED AS FOLLOWS.

1. The equatorial belt, the windward slopes of the mountains along the western coasts in the cool temperate zone and the coastal areas of the monsoon land receive heavy rainfall of over 200 cm per annum.
2. Interior continental areas receive moderate rainfall varying from 100 – 200 cm per annum.
3

coastal areas of the continents receive

amount of rainfall.
4. The central parts of the tropical land and the eastern and interior parts of the temperate lands receive rainfall varying between 50 – 100 cm per annum.
5. Areas lying in the rain shadow zone of the interior of the continents and high latitudes receive very low rainfall-less than 50 cm per annum.
6. Seasonal distribution of rainfall provides an important aspect to judge its effectiveness.
7. In some

rainfall is distributed evenly throughout the year such as in the equatorial belt and in the western parts of cool temperate regions.

Water in the Atmosphere class 11 Notes Geography. CBSE quick revision note for class-11 Mathematics, Physics, Chemistry, Biology and other subject are very helpful to revise the whole syllabus during exam days. The revision notes covers all important formulas and concepts given in the chapter. Even if you wish to have an overview of a chapter, quick revision notes are here to do if for you. These notes will certainly save your time during stressful exam days.