This unit deals with
• Biosphere — Importance Of Plants And Other Organisms;
• Ecosystems,
• Bio-Geo Chemical Cycle And Ecological Balance;
• Biodiversity And Conservation

LIFE ON THE EARTH

Living organisms of the earth, constituting the biosphere, interact with other environmental realms. The biosphere includes all the living components of the earth. It consists of all plants and animals, including all the micro- organisms that live on the planet earth and their interactions with the surrounding environment.
Organisms exist on the lithosphere, the hydrosphere as well as in the atmosphere.
The biosphere and its components are very significant elements of the environment. These elements interact with other components of the natural landscape such as land, water, and soil. They are also influenced by the atmospheric elements such as the temperature, rainfall, moisture, and sunlight. 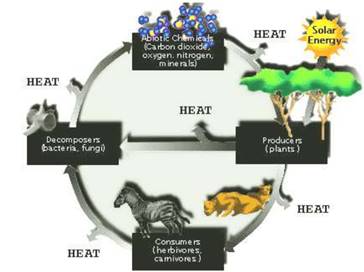 The interactions of biosphere with laid, air and water are important to the growth, development and evolution of the organism. The interaction of a particular group of organism with abotic factors within a particular habitat resulting in clearly defined energy flows and material cycles on land, water and air, are called ecological systems.
The term ecology is derived from the Greek word ‘oikos’ meaning ‘house’, combined with the word ‘logy’ meaning the ‘science of’ or ‘the study of ’. Literally, ecology is the study of the earth as a ‘household’, of plants, human beings, animals and micro­organisms. They all live together as interdependent components. A German zoologist Ernst Haeckel, who used the term as ‘oekologie’ in 1869, became the first person to use the term ‘ecology’. The study of interactions between life forms (biotic) and the physical environment (abiotic) is the science of ecology. Hence, ecology can be defined as a scientific study of the interactions of organisms with their physical environment and with each other.
A habitat in the ecological sense is the totality of the physical and chemical factors that constitute the general environment.

A system consisting of biotic and abiotic components is known as ecosystem.
Different types of ecosystems exist with varying ranges of environmental conditions where various plants and animal species have got adapted through evolution. This phenomenon is known as ecological adaptation.
Type of Ecosystems

Ecosystems are of two major types:
Terrestrial and aquatic. Terrestrial ecosystem can be further be classified into ‘biomes’.
A biome is a plant and animal community that covers a large geographical area.
The boundaries of different biomes on land are determined mainly by climate.
A biome can be defined as the total assemblage of plant and animal species interacting within specific conditions.
These include rainfall, temperature, humidity and soil conditions.
Some of the major biomes of the world are: forest, grassland, desert and tundra biomes.
Aquatic ecosystems can be classed as marine and freshwater ecosystems. Marine ecosystem includes the oceans, estuaries and coral reefs. Freshwater ecosystem includes lakes, ponds, streams, marshes and bogs. 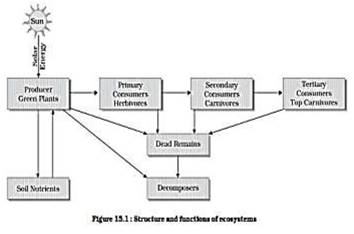 Biotic factors include the producers, the consumers (primary, secondary, tertiary) and the decomposers. The producers include all the green plants, which manufacture their own food through photosynthesis.
The primary consumers include herbivorous animals like deer, goats, mice and all plant-eating animals.
The carnivores include all the flesh-eating animals like snakes, tigers and lions. Certain carnivores that feed also on carnivores are known as top carnivores like hawks and mongooses. Decomposers are those that feed on dead organisms (for example, scavengers like vultures and crows), and further breaking down of the dead matter by other decomposing agents like bacteria and various microorganisms.
Further, the secondary consumers are consumed by the tertiary consumers.
The decomposers feed on the dead at each and every level. They change them into various substances such as nutrients, organic and inorganic salts essential for soil fertility.
This sequence of eating and being eaten and the resultant transfer of energy from one level to another is known as the food chain.
Transfer of energy that occurs during the process of a food chain from one level to another is known as flow of energy.
This interconnecting network of species is known as food web.
There are two types of food-chains are recognized: grazing food-chain and detritus food-chain.
There is a loss of energy at each level which may be through respiration, excretion or decomposition.
The levels involved in a food chain range between three to five and energy is lost at each level.
A detritus food-chain is based on autotrophs energy capture initiated by grazing animals and involves the decomposition or breaking down of organic wastes and dead matter derived from the grazing food-chain.

Biogeochemical Cycles
The sun is the basic source of energy on which all life depends. This energy initiates life processes in the biosphere through photosynthesis, the main source of food and energy for green plants. During photosynthesis, carbon dioxide is converted into organic compounds and oxygen. Out of the total solar insolation that reaches the earth’s surface, only a very small fraction (0.1 percent) is fixed in photosynthesis. More than half is used for plant respiration and the remaining part is temporarily stored or is shifted to other portions of the plant.
This balance of the chemical elements is maintained by a cyclic passage through the tissues of plants and animals. The cycle starts by absorbing the chemical elements by the organism and is returned to the air, water, and soil through decomposition. These cycles are largely energized by solar insolation. These cyclic movements of chemical elements of the biosphere between the organism and the environment are referred to as biogeochemical cycles.
Bio refers to living organisms and geo to rocks, soil, air and water of the earth.
There are two types of biogeochemical cycles: the gaseous and the sedimentary cycle.
In the gaseous cycle, the main reservoir of nutrients is the atmosphere and the ocean. In the sedimentary cycle, the main reservoir is the soil and the sedimentary and other rocks of the earth’s crust. 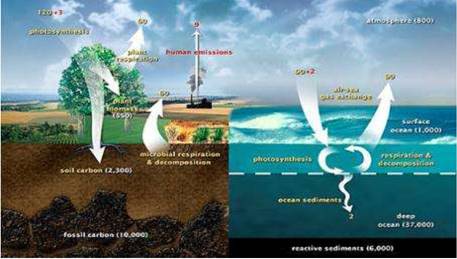 Carbon is one of the basic elements of all living organisms. It forms the basic constituent of all the organic compounds. The biosphere contains over half a million carbon compounds in them. The carbon cycle is mainly the conversion of carbon dioxide. This conversion is initiated by the fixation of carbon dioxide from the atmosphere through photosynthesis.
The Oxygen Cycle Oxygen is the main by­product of photosynthesis. It is involved in the oxidation of carbohydrates with the release of energy, carbon dioxide and water. The cycling of oxygen is a highly complex process.
Oxygen occurs in a number of chemical forms and combinations. It combines with nitrogen to form nitrates and with many other minerals and elements to form various oxides such as the iron oxide, aluminum oxide and others. Much of oxygen is produced from the decomposition of water molecules by sunlight during photosynthesis and is released in the atmosphere through transpiration and respiration processes of plants. 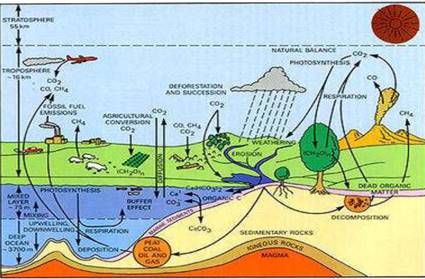 The Nitrogen Cycle
Nitrogen is a major constituent of the atmosphere comprising about seventy-nine percent of the atmospheric gases.
It is also an essential constituent of different organic compounds such as the amino acids, nucleic acids, proteins, vitamins and pigments.
Only a few types of organisms like certain species of soil bacteria and blue-green algae are capable of utilising it directly in its gaseous form.
Generally, nitrogen is usable only after it is fixed. Ninety percent of fixed nitrogen is biological.
The principal source of free nitrogen is the action of soil micro-organisms and associated plant roots on atmospheric nitrogen found in pore spaces of the soil. Nitrogen canal so be fixed in the atmosphere by lightning and cosmic radiation. In the oceans, some marine animals can fix it. After atmospheric nitrogen has been fixed into an available form, green plants can assimilate it. Herbivorous animals feeding on plants, in turn, consume some of it. Dead plants and animals, excretion of nitrogenous wastes are converted into nitrites by the action of bacteria present in the soil. Some bacteria can even convert nitrites into nitrates that can be used again by green plants. There are still other types of bacteria capable of converting nitrates into free nitrogen, a process known as denitrification Other Mineral Cycles
1. phosphorus, 2 sulphur, 3. calcium 4. potassium cycles
2. They usually occur as salts dissolved in soil water or lakes, streams and seas. All living organisms fulfill their mineral requirements from mineral solutions in their environments.
3. Other animals receive their mineral needs from the plants and animals they consume.
4. After the death of living organisms, the minerals are returned to the soil and water through decomposition and flow.

Ecological Balance
1. Ecological balance is a state of dynamic equilibrium within a community of organisms in a habitat or ecosystem.
2. It can happen when the diversity of the living organisms remains relatively stable.
3. Gradual changes do take place but that happens only through natural succession.
4. It can also be explained as a stable balance in the numbers of each species in an ecosystem.
5. This occurs through competition and cooperation between different organisms where population remains stable.
6. This balance is brought about by the fact that certain species compete with one another determined by the environment in which they grow.
7. This balance is also attained by the fact that some species depend on others for their food and sustenance.
8. Such accounts are encountered in vast grasslands where the herbivorous animals (deer, zebras, buffaloes, etc.) are found in plenty.

Ecological balance may be disturbed due to
1. the introduction of new species,
2. natural hazards or human causes.
3. Human pressure on the earth’s resources has put a heavy toll on the ecosystem.
4. This has destroyed its originality and has caused adverse effects to the general environment. Ecological imbalances have brought many natural calamities like floods, landslides, diseases, erratic climatic occurrences, etc

Life on the Earth class 11 Notes Geography. CBSE quick revision note for class-11 Mathematics, Physics, Chemistry, Biology and other subject are very helpful to revise the whole syllabus during exam days. The revision notes covers all important formulas and concepts given in the chapter. Even if you wish to have an overview of a chapter, quick revision notes are here to do if for you. These notes will certainly save your time during stressful exam days.