CBSE guide notes are the comprehensive notes which covers the latest syllabus of CBSE and NCERT. It includes all the topics given in NCERT class 11 Geography text book. Users can download CBSE guide quick revision notes from myCBSEguide mobile app and my CBSE guide website. 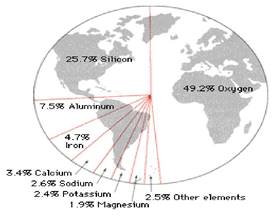 Table 5.1: The major Elements of the Earth’s Crust

Many elements found in combination with other elements. These substances are called minerals
Mineral: naturally occuring inorganic substance having an orderly atomic structure and a definite chemical composition and physical properties.
It is composed of two or three minerals /single element ex. S,Cu, Ag,Au, Graphite.
There are at least 2000 minerals in the crust. There are at least six mineral groups which form rocks in the crust.
The basic source of all minerals is the hot magma in the interior of the earth. Coal, petroleum and natural gas are organic minerals 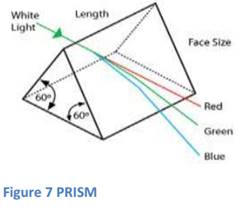 (II) CLEAVAGE: Tendency to break in given direcations producing relatively plane surfaces, it may any direction 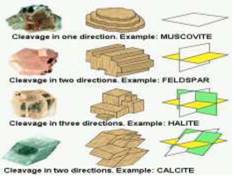 Native copper
Hackly fracture (also known as jagged fracture) is jagged, sharp and uneven. It occurs when metals are torn, and so is often encountered in native metals such as copper and silver.
Splintery fracture

Magnetite
Uneven fracture is self descriptive. It occurs in a wide range of minerals including arsenopyrite, pyrite and magnetite. The crystal breaks inan irregular manner not along the planes
LUSTURE: Adamantine lustre

Cut diamonds
Adamantine minerals possess a superlative lustre, which is most notably seen in diamond.111 Such minerals are transparent or translucent, and have a high refractive index (of 1.9 or more).121 Minerals with a true adamantine lustre are uncommon, with examples being cerussite and zircon.121
Minerals with a lesser (but still relatively high) degree of luster are referred to as subadamantine, with some examples being garnet and corundum Dull lustre
Kaolinite

Dull (or earthy) minerals exhibit little to no luster, due to coarse granulations which scatter light in all directions, approximating a Lambertian reflector. An example is kaolinite.m A distinction is sometimes drawn between dull minerals and earthy minerals,141 with the latter being coarser, and having even less lustre.
Greasy lustre

Moss opal
Greasy minerals resemble fat or grease. A greasy lustre often occurs in minerals containing a great abundance of microscopic inclusions, with examples including opal and cordierite.121 Many minerals with a greasy lustre also feel greasy to the touch.151
Metallic lustre

Pyrite
Metallic (or splendant) minerals have the lustre of polished metal, and with ideal surfaces will work as a reflective surface. Examples include Salena1161PVrite171 and magnetite.[1]^1
Pearly lustre

Muscovite
Pearly minerals consist of thin transparent co-planar sheets. Light reflecting from these layers give them a lustre reminiscent of pearls.[9] Such minerals possess perfect cleavage, with examples including muscovite and stilbite.[9]
Resinous Lustre 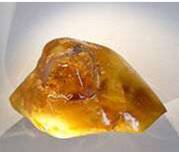 Amber
Resinous minerals have the appearance of resin, chewing gum or (smooth surfaced) plastic. A principal example is amber, which is a form of fossilized resin.
Silky lustre 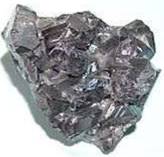 Sphalerite Submetallic minerals have similar lustre to metal, but are duller and less reflective. A submetallic lustre often occurs in near­opaque minerals with very high refractive indices,[9] such as sphalerite, cinnabar and cuprite.
Vitreous lustre 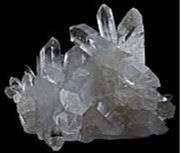 Quartz
Vitreous minerals have the lustre of glass. (The term is derived from the Latin for glass, vitrum.) This type of lustre is one of the most commonly seen, and occurs in transparent or translucent minerals with relatively low refractive indices.[9] Common examples include calcite, quartz, topaz, beryl, tourmaline and fluorite, among others.
Waxy lustre 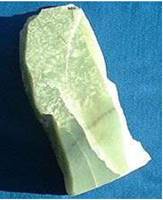 Jade
Waxy minerals have a lustre resembling wax. Examples include iade[11] and chalcedony.

Asterism is the display of a star-shaped luminous area. It is seen in some sapphires and rubies, where it is caused by impurities of rutile.1121^ It can also occur in garnet, diopside and spinel.
Aventurescence

Aventurine Aventurescence (or aventurization) is a reflectance effect like that of glitter. It arises from minute, preferentially oriented mineral platelets within the material. These platelets are so numerous that they also influence the material’s body colour. In aventurine quartz, chrome-bearing fuchsite makes for a green stone and various iron oxides make for a red stone.
Chatoyancy 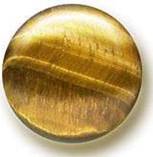 Tiger’s eye
Chatoyant minerals display luminous bands, which appear to move as the specimen is rotated. Such minerals are composed of parallel fibers (or contain fibrous voids or inclusions), which reflect light into a direction perpendicular to their orientation, thus forming narrow bands of light. The most famous examples are tiger’s eye and cymophane, but the effect may also occur in other minerals such as aquamarine, moonstone and tourmaline.
Colour change

Alexandrite
Color change is most commonly found in Alexandrite, a variety of chrysoberyl gemstones. Other gems also occur in color-change varieties, including (but not limited to) sapphire, garnet, spinel. Alexandrite displays a color change dependent upon light, along with strong pleochroism. The gem results from small scale replacement of aluminum by chromium oxide, which is responsible for alexandrite’s characteristic green to red color change. Alexandrite from the Ural Mountains in Russia is green by daylight and red by incandescent light. Other varieties of alexandrite may be yellowish or pink in daylight and a columbine or raspberry red by incandescent light. The optimum or “ideal” color change would be fine emerald green to fine purplish red, but this is exceedingly rare. Schiller Labradorite

Schiller, from German for “twinkle”, is a term used to describe the metallic iridescence originating from below the surface of a stone, that occurs when light is reflected between layers of minerals. It is seen in moonstone and labradorite and is very similar to adularescence and aventurescence.^
appearance of material without regard to clolour-metallic silky glossy
COLOUR: some colours determined by molecular structure ex.malachite, azurite, chalcopyrite some because of j impurities found the crystal. 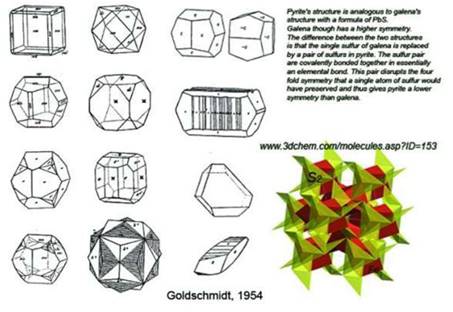 (V) SPECIFIC GRAVITY: The ratio between the weight of a given object and the weight of an equal volume of water ; object weighed in air and then weighed in water and divide weight in an airby the difference of the two weights.

IMPORTANT MINERALS OF THE EARTH CRUST

YROXENE: consists of calcium aluminum magnesium iron silica, it forms 10% of earth crust, found in meteorites,green or black in colour

MICA: consists of potassium, aluminium, magnesium iron silica. Form 4% Of the earth crust. Found in basaltic rock
IGNEOUS ROCKS; 1. They are primary rocks 2. formed due to cooling of lava
3. They are two types intrusive & extrusive rocks
Extrusive rocks have small grains because of sudden cooling intrusive rocks have bigger grains due to slow cooling4.they are hard 5. Do not contain fossils 6. Do not allow water to percolate through them 7. No layers
SEDIMENTARY ROCKS: 1. Formed Due To Sedimentation 2. Consists Of Layers 3. Contain Fossils
4. The Process Of Sedimentary Rock Formation Is Called Lithification 5. They Are Three Types. A. Mechanically Formed B.Chemically Formed 3. Organically Formed.
METAMORPHIC ROCKS: 1. Formed Due To Recrystalization 2.Formed Due To Pressure And Temperature 3. Very Smooth
4. Consists of layers sime times very preceious stones
Type of rock
Igneous rock Sedimentary rockMetamorphic rock I

Rocks are aggregate of one or more minerals, they may be hard or soft in varied colours, they do not have definite chemical composition.
Petrology is the science of rocks. Petrologist who studies the scientific methods of rocks. 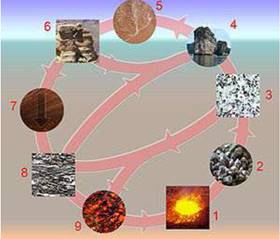 Minerals and Rocks class 11 Notes Geography. CBSE quick revision note for class-11 Mathematics, Physics, Chemistry, Biology and other subject are very helpful to revise the whole syllabus during exam days. The revision notes covers all important formulas and concepts given in the chapter. Even if you wish to have an overview of a chapter, quick revision notes are here to do if for you. These notes will certainly save your time during stressful exam days.