This chapter deals with Solar radiation, variability of insolation at the surface of the earth heating and cooling of atmosphere, terrestrial radiation, heat budget of the planet earth, latitudinal variation in net radiation balance, temperature, factors influencing the temperature (such as the latitude, altitude, distance from the sea air mass ocean currents) distribution of temperature, isotherm.

The earth’s surface receives most of its energy in short wavelengths. The energy received by the earth is known as incoming solar radiation which in short is termed as insolation.

Which factor is responsible for the varied distribution of energy?

As the earth is a Geoid resembling a sphere, the sun’s rays fall obliquely at the top of the atmosphere and the earth intercepts a very small portion of the sun’s energy.

What is the average amount of energy received by the earth?

In an average the earth receives 1.94 calories per sq. cm per minute at the top of its atmosphere.

Give the reasons why it is summer when earth is far away from the sun and winter when it is nearest to the Sun.

The solar output received at the top of the atmosphere varies slightly in a year due to the variations in the distance between the earth and the sun. During its revolution around the sun, the earth is farthest from the sun (152 million km) on 4th July. This position of the earth is called aphelion. On 3rd January, the earth is the nearest to the sun (147 million km). This position is called perihelion. Therefore, the annual insolation received by the earth on 3rd January is slightly more than the amount received on 4th July. However, the effect of this variation in the solar output is masked by other factors like the distribution of land and sea and the atmospheric circulation. Hence, this variation in the solar output does not have great effect on daily weather changes on the surface of the earth.

Variability of Insolation at the Surface of the Earth
The amount and the intensity of insolation vary during a day, in a season and in a year. The factors that cause these variations in insolation are
(i) the rotation of earth on its axis;
(ii) the angle of inclination of the sun’s rays;
(iii) the length of the day;
(iv) the transparency of the atmosphere;
(v) the configuration of land in terms of its aspect.
The last two however, have less influence. The fact that the earth’s axis makes an angle of 66_ with the plane of its orbit round the sun has a greater influence on the amount of insolation received at different latitudes.
Note: The variations in the duration of the day at different latitudes on solstices are given in the Table below.

Table 9.1: Length of the Day in Hours and Minutes on Writer and Summer Solstices in the Northern Hemisphere

The second factor that determines the amount of insolation received is the angle of inclination of the rays. This depends on the latitude of a place. The higher the latitude the less is the angle they make with the surface of the earth resulting in slant sunrays. The area covered by vertical rays is always less than that covered by the slant rays. If more area is covered, the energy gets distributed and the net energy received per unit area decreases. Moreover, the slant rays are required to pass through greater depth of the atmosphere resulting in more absorption, scattering and diffusion.

The incoming radiation is not fully reached to the earth surface. Why?

1. The atmosphere is largely transparent to short wave solar radiation. The incoming solar radiation passes through the atmosphere before striking the earth’s surface.
2. Within the troposphere water vapor, ozone and other gases absorb much of the near infrared radiation.
3. Very small-suspended particles in the troposphere scatter visible spectrum both to the space and towards the earth surface.
4. This process adds colour to the sky.
5. The red colour of the rising and the setting sun and the blue colour of the sky are the result of scattering of light within the atmosphere.

What is the average distribution of insolation on the surface? Give the reasons for such variation.

Spatial Distribution of Insolation on the Earth’s Surface
The insolation received at the surface varies
from about 320 Watt/m in the tropics to about 70 Watt/min the poles. Maximum insolation is received over the subtropical deserts, where the cloudiness is the least. Equator receives comparatively less insolation than the tropics. Generally, at the same latitude the insolation is more over the continent than over the oceans. In winter, the middle and higher latitudes receive less radiation than in summer.

HEATING AND COOLING OF ATMOSPHERE Name the ways of heating the atmosphere.
1. Radiation 2. Conduction 3. Advection 4. convection
1. Horizontal movement of the air is relatively more important than the vertical movement.
2. In middle latitudes, most of diurnal (day and night) variation in daily weather are caused by advection alone.
3. In tropical regions particularly in northern India during summer season local winds called ‘loo’ is the outcome of advection process.

The atmosphere in turn radiates and transmits heat to the space. Finally the amount of heat received from the sun is returned to space, thereby maintaining constant temperature at the earth’s surface and in the atmosphere.
With the help of a diagram explain the Heat Budget of the Planet Earth. 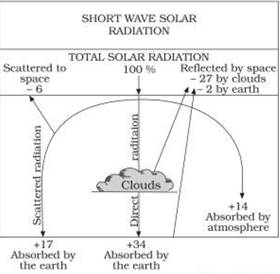 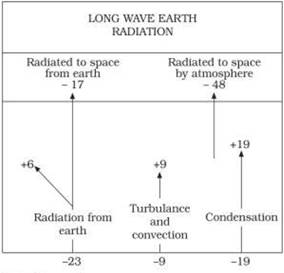 1. Figure 9.2 depicts the heat budget of the planet earth. The earth as a whole does Not accumulate or loose heat. It maintains its temperature.
2. This can happen only if the amount of heat received in the form of insolation equals the amount lost by the earth through terrestrial radiation.
3. Consider that the insolation received at the top of the atmosphere is 100 percent.
4. While passing through the atmosphere some amount of energy is reflected, scattered and absorbed.
5. Only the remaining part reaches the earth surface.
6. Roughly 35 units are reflected back to space even before reaching the earth’s surface.
7. Of these, 27 units are reflected back from the top of the clouds
8. Only 2 units from the snow and ice-covered areas of the earth.
9. The remaining 65 units are absorbed,
10. 14 units within the atmosphere and 51 units by the earth’s surface.

Thus, the total radiation returning from the earth and the atmosphere respectively is 17+48=65 units which balance the total of 65 units received from the sun. This is termed the heat budget or heat balance of the earth.
This explains, why the earth neither warms up nor cools down despite the huge transfer of heat that takes place.

What do you mean by ‘Albedo’? 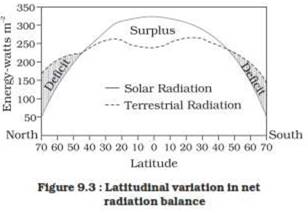 Figure 9.3 depicts the latitudinal variation in the net radiation balance of the earth the atmosphere system.
The figure shows that there is a surplus of net radiation balance between 40 degrees north and south and the regions near the poles have a deficit.
The surplus heat energy from the tropics is redistributed pole wards and as a result the tropics do not get progressively heated up due to the accumulation of excess heat or the high latitudes get permanently frozen due to excess deficit.

WHAT IS THE DIFFERENCE BETWEEN HEAT AND TEMPERATURE
Temperature

The interaction of insolation with the atmosphere and the earth’s surface creates heat which is measured in terms of temperature.
While heat represents the molecular movement of particles comprising a substance, the temperature is the measurement in degrees of how hot (or cold) a thing (or a place) is.
Factors Controlling Temperature Distribution
The temperature of air at any place is influenced by
(i) the latitude of the place;
(ii) the altitude of the place;
(iii) distance from the sea, the air mass circulation;
(IV) the presence of warm and cold ocean currents;
(v) local aspects. 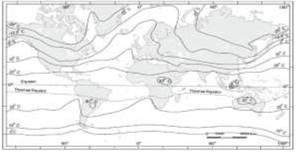 1. In general the effect of the latitude on temperature is well pronounced on the map,
2. the isotherms are generally parallel to the latitude.
3. The deviation from this general trend is more pronounced in January than in July, especially in the northern hemisphere.
4. In the northern hemisphere the land surface area is much larger than in the southern hemisphere.
5. Hence, the effects of land mass and the ocean currents are well pronounced.
In January the isotherms deviate to the north over the ocean and to the south over the continent. This can be seen on the North Atlantic Ocean.

Normally, temperature decreases with increase in elevation. It is called normal lapse rate. At times, the situations is reversed and the normal lapse rate is inverted. It is called Inversion of temperature. Inversion is usually of short duration but quite common nonetheless. A long winter night with clear skies and still air is ideal situation for inversion. The heat of the day is radiated off during the night, and by early morning hours, the earth is cooler than the air above.

Solar Radiation, Heat Balance and Temperature class 11 Notes Geography. CBSE quick revision note for class-11 Mathematics, Physics, Chemistry, Biology, and other subject are very helpful to revise the whole syllabus during exam days. The revision notes covers all important formulas and concepts given in the chapter. Even if you wish to have an overview of a chapter, quick revision notes are here to do if for you. These notes will certainly save your time during stressful exam days.