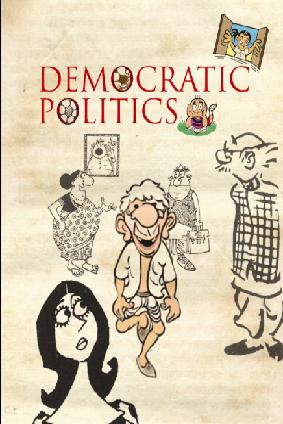 Question 1 If you are elected as the President of India which of the following decision can you take on your own?

a. Select the person you like as Prime Minister.

b. Dismiss a Prime Minister who has a majority in Lok Sabha.

c. Ask for reconsideration of a bill passed by both the Houses.

d. Nominate the leaders of your choice to the Council of Ministers.

Answer : (c) Ask for reconsideration of a bill passed by both the houses

Question 2 Who among the following is a part of the political executive?

b. Secretary of the Ministry of Home Affairs

Question 3 Which of the following statements about the judiciary is false?

a. Every law passed by the Parliament needs approval of the Supreme Court

b. Judiciary can strike down a law if it goes against the spirit of the Constitution

c. Judiciary is independent of the Executive

d. Any citizen can approach the courts if her rights are violated

Answer :(a) Every law passed by the Parliament needs approval of the Supreme Court.

Question 4 Which of the following institutions can make changes to an existing law of the country?

a. The Supreme Court

a. A new policy is being made to increase the jute exports from the country.

b. Telephone services will be made more accessible to rural areas.

c. The price of rice and wheat sold under the Public Distribution System will go down.

d. A pulse polio campaign will be launched.

e. The allowances of the soldiers posted on high altitudes will be increased.

i. Ministry of Defence

iv. Ministry of Commerce and Industry

<td “>(a) A new policy is being made to increase the jute exports from the country.

Question 6: Of all the institutions that we have studied in this chapter, name the one that exercises the powers on each of the following matters.

a. Decision on allocation of money for developing infrastructure like roads, irrigation etc. and different welfare activities for the citizens

b. Considers the recommendation of a Committee on a law to regulate the stock exchange

Answer : b) The Parliament

c Decides on a legal dispute between two state governments

d Implements the decision to provide relief for the victims of an earthquake.

Question 7 Why is the Prime Minister in India not directly elected by the people? Choose the most appropriate answer and give reasons for your choice.

a. In a Parliamentary democracy only the leader of the majority party in the Lok Sabha can become the Prime Minister.

b. Lok Sabha can remove the Prime Minister and the Council of Ministers even before the expiry of their term.

c. Since the Prime Minister is appointed by the President there is no need for it.

d. Direct election of the Prime Minister will involve lot of expenditure on election.

Answer : In a Parliamentary democracy only the leader of the majority party in the Lok Sabha can become the Prime Minister.This is to ensure that the Prime Minister secures a majority support. This prevents him/her from being either a puppet or a dictator since he/she has to function along with a council of ministers.

Question 8 Three friends went to watch a film that showed the hero becoming Chief Minister for a day and making big changes in the state. Imran said this is what the country needs. Rizwan said this kind of a personalrule without institutions is dangerous. Shankar said all this is a fantasy. No minister can do anything in one day. What would be your reaction to such a film?

Answer : This film is unrealstic. A single man can’t don anything alone. He have to follow procedures and guides written in constitution. Apersonal rule without institutions is dangerous.

Question 9: A teacher was making preparations for a mock parliament. She called two students to act as leaders of two political parties. She gave them an option: Each one could choose to have a majority either in the mock Lok Sabha or in the mock Rajya Sabha. If this choice was given to you, which one would you choose and why?

Answer : I would choose to have a majority in the Lok Sabha as it is more powerful than the Rajya Sabha. Lok Sabha members are directly elected by the people. The leader of political party which is in majority in Lok Sabha will be appointed as prime minister which is most powerful person in the country.

Question 10 After reading the example of the reservation order, three students had different reactions about the role of the judiciary. Which view, according to you, is a correct reading of the role of judiciary?

a. Srinivas argues that since the Supreme Court agreed with the government, it is not independent.

b. Anjaiah says that judiciary is independent because it could have given a verdict against the government order. The Supreme Court did direct the government to modify it.

c. Vijaya thinks that the judiciary is neither independent nor conformist, but acts as a mediator between opposing parties. The court struck a good balance between those who supported and

those who opposed the order.

Answer : The view that Anjaiah had is coorect according to my view.