NCERT Solutions for class 7 English Gopal and The Hilsa Fish book solutions are available in PDF format for free download. These ncert book chapter wise questions and answers are very helpful for CBSE exam. CBSE recommends NCERT books and most of the questions in CBSE exam are asked from NCERT text books. Class 7 English chapter wise NCERT solution for English part 1 and English part 2 for all the chapters can be downloaded from our website and myCBSEguide mobile app for free

Page No: 42
Working with the Text
Answer the following questions.
1. Why did the king want no more talk about the hilsa-fish?

Ans: The king was fed of the talks of Hilsa-fish. It was season of Hilsa-fish and everyone was busy in talking of it. More-ever, he did not want his courtier to waste the time on these talks.

2. What did the king ask Gopal to do to prove that he was clever?

Ans: The king asked Gopal to buy a hilsa-fish and bring it to the palace without anyone asking anything about the fish throughout the way to prove that he was clever.

3. What three things did Gopal do before he went to buy his hilsa-fish?

Ans: Gopal half-shaved his beard, smeared himself with ash, and wore disgraceful rags before he went to buy his hilsa-fish.

4. How did Gopal get inside the palace to see the king after he had bought the fish?

Ans: When Gopal asked the guards to let him meet the king, they refused. Therfore, he began to dance and sing loudly. On hearing his loud song, the king sent his messenger to call him in the court.

5. Explain why no one seemed to be interested in talking about the hilsa-fish which Gopal had bought.

Ans: Gopal funny appearance attracted the attention of people much more than the hilsa-fish. At that time, no one was caring about the hilsa-fish he was carrying. Everyone was busy in talking about his mad appearance, half shaved face and rags.

6. Write ‘True’ or ‘False’ against each of the following sentences.
(i) The king lost his temper easily.
(ii) Gopal was a madman.
(iii) Gopal was a clever man.
(iv) Gopal was too poor to afford decent clothes.
(v) The king got angry when he was shown to be wrong.

1. Notice how in a comic book, there are no speech marks when characters talk. Instead what they say is put in a speech ‘bubble’. However, if we wish to repeat or ‘report’ what they say, we must put it into reported speech.
Change the following sentences in the story to reported speech. The first one has been done for you.
(i) How much did you pay for that hilsa?
The woman asked the man how much he had paid for that hilsa.
(ii) Why is your face half-shaven?
Gopal’s wife asked him ……
(iii) I accept the challenge, Your Majesty.
Gopal told the king ……
(iv) I want to see the king.
Gopal told the guards ……
(v) Bring the man to me at once.
The king ordered the guard ……

Ans: (ii)Why is your face half-shaven?
Gopal’s wife asked him why was his face half-shaven.
(iii) I accept the challenge, Your Majesty.
Gopal told the king that he accepted his challenge.
(iv) I want to see the king.
Gopal told the guards that he wanted to see the king.
(v) Bring the man to me at once.
The king ordered the guard to bring the man to him at once.

Page No: 43
2. Find out the meaning of the following words by looking them up in the dictionary. Then use them in sentences of your own.
(i) challenge
(ii) mystic
(iii) comical
(iv) courtier
(v) smearing

Ans: (i) challenge – ask to contest, dare
The boss challenged Rahul to finish his work before the time.
(ii) mystic – believing in spiritual power
Some people do believe in the mystic forces.
(iii) comical – funny
I liked the comical act of the joker the most.
(iv) courtier – officials of the king’s court
Birbal was one of the clever courtier present in Akbar’s court.
(v) smearing – to apply coat or mark
He smeares his face with ashes.

Ans: (i) Stag is by the side of the pond.
(ii) He is looking at the reflection of his horns and legs in the water.
(iii) Yes, he liked his antlers.
(iv) No, he did’t liked his legs.
(v) The stag is running to save his life from the hunters.
(vi) No, he is not able to hide himself in the bushes.
(vii) The hunters are now beside to him.
(viii) Yes, they closing in on the stag.
(ix) Yes, the stag is free.
(x) The stag said that he was proud of his horns which could have caused his death and was ashamed of his legs which saved him.

3.  Now write the story in your own words. Give it a title.

Ans: The suitable title for this story will be “All that glitters is not gold”.
A stag was once drinking water at a pond. He saw his own reflection in water. He admired his beautiful horns, but he did not like his thin and ugly legs. Suddenly he saw a group of hunters running towards him. He ran into the jungle to save himself. His legs soon carried him far from the hunters. He then tried to hide himself in the bushes but his horns were caught into the bush. With his best efforts, he was able to free himself. Now he realised that his ugly legs helped him in saving his life, but his beautiful horns could have caused his death.

Page No: 47
4. Complete the following word ladder with the help of the clues given below. 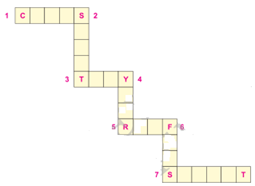 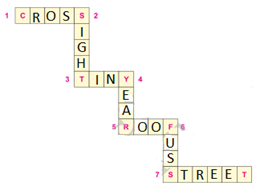