5. The poet could not understand the words of the song, yet he raised several possibilities about its theme. In the diagram below are some of these possibilities. Read the third stanza again, and find the phrase that matches each. Copy and complete the diagram, writing each phrase in the empty boxes. Work in pairs. 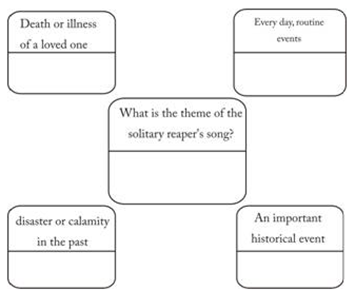 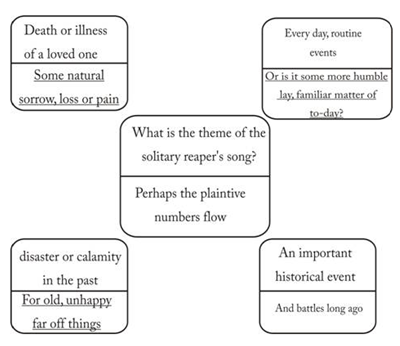 7.(a) Read the second stanza again, in which Wordsworth compares the solitary reaper’s song with the song of the nightingale and the cuckoo. On the basis of your reading (and your imagination), copy and complete the table below. (Work in groups of four, then have a brief class discussion.)

(c) As you read the second stanza, what pictures come to your mind? Be ready todescribe them in your own words, to the rest of the class. (Do not be afraid to gobeyond what the poet has written.)
Ans: The second stanza presented the scene of a alone girl standing between the field busy in cutting the grain and binding it. She is singing the sad song while doing her job and the grief of that song is passing from the deep valley. The sadness of her song is so immense that no nightingale singing their song or even chanting.

8. In the sixth line of the first Stanza, we read:
“… and sings a melancholy strain…”
This “s” sound at the beginning of sings and strain has been repeated. Poets often do this. Do you know why? Do you know what this “poetic repetition” is called? Can you find instances of this in The Solitary Reaper?
Ans: Poets often repeat such sounds to make the effect more intense and ornamental. This “poetic repetition” is called alliteration.
In line 15 we find an instance of alliteration in “silence of the seas.” In line 18 we find alliteration in “perhaps the plaintive numbers flow.” Line 27 also has alliteration in “I saw her singing at her work.”