NCERT Solutions for Class 7 Social Science Inside our earth are available in PDF format for free download. These ncert book chapter wise questions and answers are very helpful for CBSE exam. CBSE recommends NCERT books and most of the questions in CBSE exam are asked from NCERT text books. Class 7 Social Science chapter wise NCERT solution for Social Science part 1 part 2 and Part 3  for all the chapters can be downloaded from our website and myCBSEguide mobile app for free.

NCERT solutions for Geography Inside our earth Download as PDF

NCERT Solutions for Class 7 Social Science Inside our earth

(i) The rock which is made up of molten magma is
(a) Igneous (b) Sedimentary (c) Metamorphic
Ans: (a) Igneous

(iii) Gold, petroleum and coal are examples of
(a) Rocks (b) Minerals (c) Fossils
Ans: (b) Minerals

(ii) Sedimentary rocks are formed from sediments.
Ans:When big rocks break down into small fragments (or sediments), the fragments are transported and deposited by water and wind. The loose sediments compress and harden over the years to form layers of rocks. These rocks are known as sedimentary rocks. For example, sandstone is made from grains of sand. These rocks may also contain fossils of plants, animals and other microorganisms that once lived on them.

(iii) Limestone is changed into marble.
Ans: Limestone is an example of sedimentary rock. When subjected to extreme heat and pressure, it gets converted into marble, a metamorphic rock. This is a continuous process given more temperatures and pressure the rock may melt completely and would eventually turn into and igneous rock that will get eroded and become limestone again.

(i) What are the minerals most commonly used in the following objects? 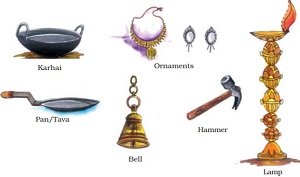 (ii) Identify some more objects made up of different minerals.
Ans. (i)

(ii) Pencil lead is made of graphite. Telephones have copper wiring. Carpets in our homes contain sulphur and chromite. Clocks are made of Quartz and Pentlandite. Toothpaste is made white with titanium oxide which comes from minerals called rutile, ilmenite, and anatase.