1. The” Biosphere” is the life supporting zone of the earth with three sub-zones called as lithosphere (rock part), atmosphere (air part) and hydrosphere (water part). Breath of air 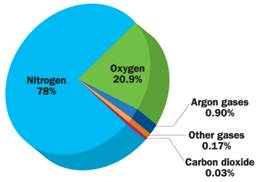 3. The interactions between different components of the Biosphere to maintain the balance between the biotic and a biotic component makes “Biogeochemical cycle”. Ex. Water Cycle, Nitrogen Cycle, Carbon cycle, Oxygen Cycle,

4. Role of atmosphere in climate control : atmosphere act as protective blanket for the earth. Since atmosphere is a bad conductor of heat, it keeps the average temperature of the earth constant. At night, it slows down the escape of heat into outer space.

6. In coastal regions, during the day, the air above the land gets heated faster and starts rising. So a region of low pressure is created and air over sea moves into this area of low pressure. The movement of air from one region to the other region causes Wind.

8. Air pollution : it is an undesirable change in the physical, chemical or biological characteristics. It is caused due to an increase in the content of harmful substances (pollutant) such as oxides of nitrogen and sulphur, etc.

a) The process in which water evaporates and falls on the land as rain and later flows back into the sea via rivers is known as the “Water Cycle”. Water flows through rocks containing soluble minerals, some of them get dissolved in the water. Thus the rivers carry many nutrients from the land to sea and these are used by the marine organisms.

b) When the water vapors condense as water droplets and grow big and heavy, they fall down in the form of “rain”. It ranges from 5 cm to 200 cm of rain fall in a year in ourcountry. In large parts of India, rains are mostly brought by the south-west or north-east monsoons. Depressions in the Bay of Bengal may also cause rains in some areas.

c) Water is a wonder liquid because all cellular processes take place in a water medium; substances are transported in a dissolved form; terrestrial forms require fresh water to maintain the equilibrium of salts; major resource to determine the life on the earth.

d) The dissolved fertilizers (NPK fertilizers), pesticides (DDT), sewage (Disease causing Organisms), waste from factories (Mercury) and water released from the dams can affect the life forms on the earth. The dissolved Oxygen is being used by the animals and plants that live in water, would adversely affect the aquatic organisms. The change in temperature would be dangerous for the eggs and larvae of the various animals particularly susceptible to temperature changes. It leads to “water pollution”.

a) The nitrogen gas makes up 78% of our atmosphere. It is essential for the synthesis of proteins, DNA, RNA, urea, alkaloids and Vitamins.

b) The simple molecular nitrogen from the atmosphere is converted into more complex molecules in the living beings and back again to atmosphere is called “Nitrogen Cycle”.

i) Nitrogen fixation by Lightening: During lightning, the molecular nitrogen is converted into oxides of nitrogen and dissolves in water to give nitric and nitrous acids and fall on lands along with rains. These are then utilized by various life forms.

ii) Nitrogen fixation by Bacteria: The molecular nitrogen is converted into nitrates and nitrites, by free living bacteria or the bacteria present in the root nodules of legumes.

i) The Carbon dioxide gas makes up 0.039 % of our atmosphere. Carbon occurs in the elemental form as diamonds and graphite in earth. Carbon is essential for the synthesis of proteins, carbohydrates, fats, nucleic acids and Vitamins in living organisms.

ii) The Carbon dioxide Fixation: Green plants convert Carbon dioxide into glucose in the presence of sunlight through Photosynthesis. The glucose molecules are converted into other biologically important molecules. And many marine animals use carbonates dissolved in sea water to make shells, exoskeletons.

iii) The combustion: The Carbon dioxide in the atmosphere is added by the process of combustion, where fuels are burnt to provide energy for various needs like heating, cooking, transportation, and industrial process.

i) The Oxygen gas makes up 21 % of our atmosphere. Oxygen is essential component of proteins, carbohydrates, fats, nucleic acids in living organisms.

ii) Oxygen from our atmosphere is used up in three processes, namely combustion, respiration and in the formation of oxides of nitrogen. Oxygen is returned to the atmosphere in only one major process, that is, Photosynthesis, it is called as Oxygen Cycle.

iv) The oxides of nitrogen and sulphur gases dissolve in rain to gives rise to “Acid rains”. The smog is a visible indication of Air Pollution. The pollutants bring respiratory, cardiac problems and allergies. The organisms called Lichens are found on the bark of trees, they are indicators of pollution free environment. Three atoms of Oxygen ( O3) is called as Ozone. The Ozone is poisonous but absorbs harmful radiations from the Sun. The Ozone layer around the earth, if, dwindles further may cause Health hazards including Cancers . Recently discovered the Ozone hole; in the region of Antarctica.

Natural Resources class 9 Notes . CBSE quick revision note for Class 9 Science, Chemistry, Maths, Biology and other subject are very helpful to revise the whole syllabus during exam days. The revision notes covers all important formulas and concepts given in the chapter. Even if you wish to have an overview of a chapter, quick revision notes are here to do if for you. These notes will certainly save your time during stressful exam days.