Balanced Forces: The net force is when two or more forces are applied on the same object and at the same time. The applied forces combined are called the net force.

Balanced Forces The force I apply in one direction plus the force you apply in the opposite direction are added together. 2 Because the forces are equal and balanced

Unbalanced Forces If I have a chair and I push on one side of it with a force of 50 N and you push on the other side, with a force of 25 N, will the chair move? Which way will it move? The direction in which the most force is applied. What is the net force? 50 N 25 N.

1st Law – An object at rest will stay at rest, and an object in motion will stay in motion at constant velocity, unless acted upon by an unbalanced force.

An object at rest will stay at rest, and an object in motion will stay in motion at constant velocity, unless acted upon by an unbalanced force.

Mathematical symbols provide a convenient shorthand for all of this: 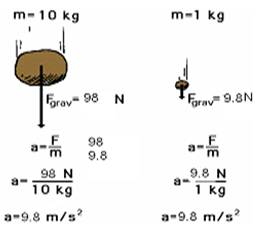 The Effect of Mass

The acceleration of an object depends not only on how hard you push on it, but also on how much the object resists being pushed.

This type of relationship between quantities (double one, get half the other) is called an inverse proportion or inverse variation. In other words, then:

Newton’s Second Law of Motion The acceleration of an object is dependent upon both force and mass. Thus, if the colliding objects have unequal mass, they will have unequal accelerations as a result of the contact force which results during the collision.

Newton’s Third Law is stated as: For every action there is an equal and opposite reaction.

These names are unfortunate for a couple of reasons :

The action and reaction forces exist at the same time.

Inertia is the tendency of an object to resist any change in its motion. An object will continue to move at the same speed in the same direction unless acted upon by an unbalanced force. Inertia & Mass Inertia & Mass of a bowling ball rolled down the road would eventually come to a stop. Friction is an unbalanced force that causes the ball to stop or slow down. Without friction, the ball would keep going.

Mass is the amount of matter in an object. A bowling ball has more mass than a tennis ball. The greater the mass of an object the greater its inertia.

Mass is the measurement of inertia.

Law of Conservation of Momentum

In a closed system, the vector sum of the momenta before and after an impact must be equal.

Forces and Laws of Motion class 9 Notes. CBSE quick revision note for Class-9 Science, Chemistry, Maths, Biology and other subject are very helpful to revise the whole syllabus during exam days. The revision notes covers all important formulas and concepts given in the chapter. Even if you wish to have an overview of a chapter, quick revision notes are here to do if for you. These notes will certainly save your time during stressful exam days.