NCERT Solutions for Class 9 Science Structure of the Atom part 1 Class 9 Science book solutions are available in PDF format for free download. These ncert book chapter wise questions and answers are very helpful for CBSE exam. CBSE recommends NCERT books and most of the questions in CBSE exam are asked from NCERT text books. Class 9 Science chapter wise NCERT solution for Science Book for all the chapters can be downloaded from our website and myCBSEguide mobile app for free.

2. If an atom contains one electron and one proton, will it carry any charge or not?

1. On the basis of Thomson’s model of an atom, explain how the atom is neutral as a whole.

2. On the basis of Rutherford’s model of an atom, which subatomic particle is present in the nucleus of an atom?

Ans. The sub atomic particle proton is present in the nucleus of an atom according to Rutherford’s model of an atom.

3. Draw a sketch of Bohr’s model of an atom with three shells. 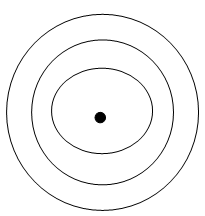 4. What do you think would be the observation if the α-particle scattering experiment is carried out using a foil of a metal other than gold?

Ans. Yes the observations would have been different if the α-particle scattering experiment is carried out using a foil of a metal other than gold.

5. Name the three sub-atomic particles of an atom.

6. Helium atom has an atomic mass of 4 u and two protons in its nucleus. How many neutrons does it have?

Ans. The number of neutrons present in a helium atom

= atomic mass – no. of protons

1. Write the distribution of electrons in carbon and sodium atoms.

Distribution of electrons in sodium atom: atomic number of sodium = 11 = 2,8,1

2. If K and L shells of an atom are full, then what would be the total number of electrons in the atom?

1. How will you find the valency of chlorine, sulphur and magnesium?

Ans. The electrons present in the outermost shell of an atom are known as the valence electrons. Those electrons determine the valency of that atom.

so the number of valence electrons for chlorine is 7 and it needs 1 more electron to complete its octet (8). Therefore, its valency is one.

so the number of valence electrons for sulphur is 6 and it needs 2 more electrons to complete its octet (8). Therefore, its valency is two.

It becomes easier for magnesium to give away its two valence than to acquire 6 more therefore its valency is two.

2. If number of electrons in an atom is 8 and number of protons is also 8, then

(i) what is the atomic number of the atom? and

(ii) what is the charge on the atom?

(ii)atom will be neutral (no charge) because number of protons(+) is equal to the number of electrons (-).

3. With the help of Table 4.1, find out the mass number of oxygen and sulphur atom.

1. For the symbol H,D and T tabulate three sub-atomic particles found in each of them.

2. Write the electronic configuration of any one pair of isotopes and isobars.

both have same number of electrons and protons.