1. Draw a quadrilateral in the Cartesian plane, whose vertices are 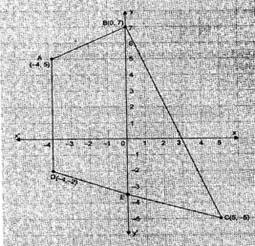 2. The base of an equilateral triangle with side

axis such that the mid-point of the base is at origin. Find the vertices of the triangle.

Ans. Given: Length of side of equilateral triangle =

. The base of triangle lies along

Let vertices of the third vertex be

The vertices of triangle are

3. Find the distance between P

when (i) PQ is parallel to the

axis (ii) PQ is parallel to the

(i) PQ is parallel to

(ii) PQ is parallel to

4. Find the point on the

be any point on the

According to question, PQ = PR

Therefore, the coordinates of the point are

5. Find the slope of a line, which passes through the origin and the mid-point of the line segment of joining the points P

Since the line passes through points (0, 0) and

Therefore, Slope of the line =

are the vertices of a right angled triangle.

be three vertices of a

This shows that AB

is right angled at point A.

7. Find the slope of the line, which makes an angle of

Ans. The line makes an angle of

Now the line makes an angle of

Slope of the line =

8. Find the value of

for which the points

According to question, Slope of AB = Slope of BC

9. Without using distance formula, show that the points

are the vertices of a parallelogram.

be vertices of a quadrilateral ABCD.

And Slope of BC = Slope of AD

Therefore, ABCD is a parallelogram.

10. Find the angle between the

axis and the line joining the points

be two points. Let Q be the angle which AB makes with positive direction of

11. The slope of a line is double of the slope of the another line. If tangent of the angle between them is

find the slopes of the lines.

. Let the slopes of two lines be

Therefore, the slopes of lines are

12. A line passes through

If slope of the line is

be two points. It is given that Slope of AB =

lies on a line, show that

be three points lie on the line.

14. Consider the following population and year graph, find the slope of the line AB and using it, find what will be the population in the year 2010? 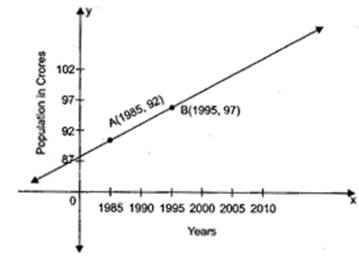 Let the population in year 2010 be

lies on the line.

Since points A, B and C lie on the line.

Slope of AB = Slope of BC