Mendel and His Work on Inheritance

Mendel was known as Father of Genetics

Cross between two pea plants with one pair of contrasting characters is called a monohybridcross. 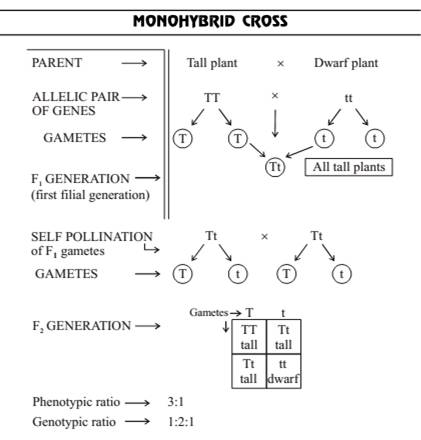 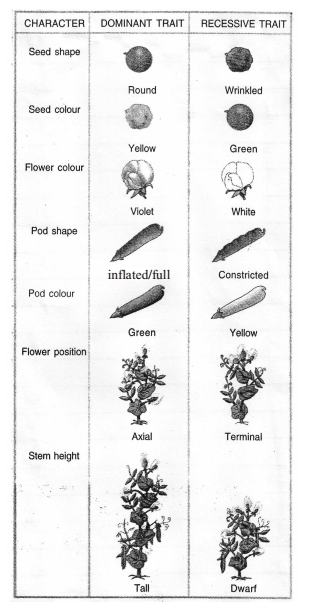 1. TT and Tt both are tall plants while tt is a short plant.

2. A single copy of T is enough to make the plant tall, while both copies have to be ‘t’ for the plant to be short.

From these observation, Mendel put forward the rules of inheritance

Law of Segregation: Every individual possesses a pair of alleles for a particular trait. During gamete formation, a gamete receives only one trait from the alleles. A particular trait can be dominant or recessive in a particular generation. 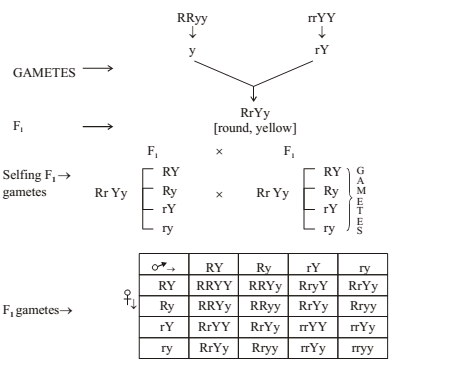 Determination of sex of an offspring.

Sex Chromosomes :In human beings there are 23 pairs of chromosome. Out of these 22 chromosomes pairs are called autosomes and the last pair of chromosome that help in deciding gender of that individual is called sex chromosome. 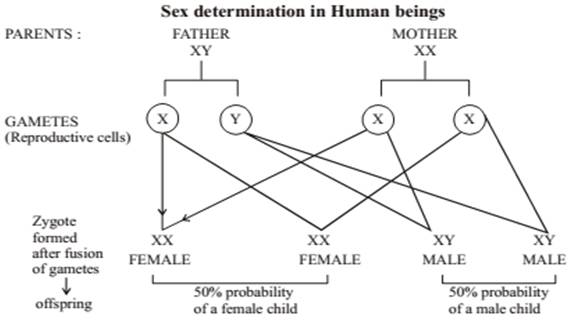 Evolution is the sequence of gradual changes which takes place in the primitive organisms, over millions of years, in which new species are produced. 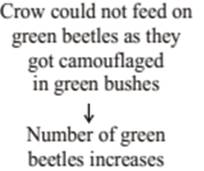 Situation 1 : Green beetles got the survival advantage or they were naturally selected as they were not visible in green bushes. This natural selection is exerted by crows resulting in adaptations in the beetles to fit better in their environment

Situation 2 : Blue beetles did not get survivals advantage. Elephant suddenly caused major havoc in beetle population otherwise their number would have been considerably large.

From this we can conclude that accidents can change the frequency of some genes even if they do not get survival advantage: This is called genetic drift and it leads to variation.

decreases due to poor nourishment

Number of beetles kept on reducing

Number and average weight of the beetles

Situation 3 : No genetic change has occurred in the population of beetle.The population gets affected for a short duration only due to environmentalchanges.

They get transferred to the progeny. Low weight of starving beetles3. They are helpful in evolution.eg. Colour of eyes and hair

Micro Evolution : It is the evolution which is on a small scale. e.g.change in body colour of beetles.

The process by which new species develop from the existing species is known as speciation.

Speciation : it is the process of formation of new species.

Species : A group of similar individuals within a population that can interbreed and produce fertile offspring.

Factors which lead to speciation : Geographical isolation,genetic drifts and variations.

Geneflow : It is exchange of genetic material by interbreeding betweenpopulations of same species or individuals

WAYS BY WHICH SPECIATION TAKES PLACE

Speciation takes place when variation is combined with geographical isolation.

Gene flow :occurs between population that are partly but not completely separated.

It is the random change in the frequency of alleles (gene pair) in a population over successive generations.

*Natural Selection : The process by which nature selects and consolidate those organisms which are more suitably adapted and possesses favorable variations

Results in Accumulation of different variations in

Genetic drift takes place due to :
(a) Severe changes in the DNA
(b) Change in number of chromosomes

EVOLUTION : the process by which different kinds of living organism are believed to have developed from earlier forms during the history of the earth

Both evolution and classification are interlinked. 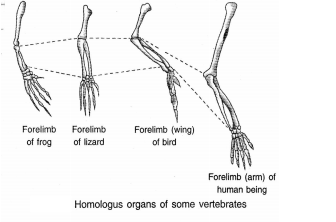 TRACING EVOLUTIONARY RELA TIONSHIPS : Jean Baptiste Lamarck gave the first theory of evolution. The accepted one is The Origin of Species by Charles Darwin.

I. Homologous Organs : (Morphological and anatomical evidences. These are the organs that have same basic structural plan and origin but different functions.

Homologous organs provides evidence for evolution by telling us that they are derived from the same ancestor.

II. Analogous Organs : These are the organs that have different origin and structural plan but same function example :

The remains and relics of dead organisms of the past.

Fossil Archaeopteryx possess features of reptiles as well as birds. This suggests that birds have evolved from reptiles.

AGE OF THE FOSSILS

Evolution of Eyes : Evolution of complex organs is not sudden it occursdue to minor changes in DNA, however takes place bit by bit over generations.

Feathers {/tex} \to {/tex} provide insulation in cold weather but later they mightbecome useful for flight.
Example : Dinosaurs had feathers, but could not fly using feathers. Birds seem to have later adapted the feathers to flight. 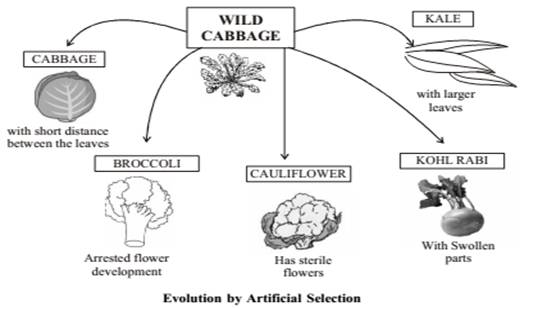 Evolution by Artificial Selection : Humans have been a powerful agent in modifying wild species to suit their own requirement through out ages by using artificial selection. e.g. (i) From wild cabbage many varieties like broccoli, cauliflower, red cabbage, kale, cabbage and

GENETIC FOOTPRINTS OF HUMANS
Hundreds/thousand of years ago

Heredity and Evolution class 10 Notes Science. CBSE quick revision note for Class-10 Science, Chemistry, Maths, Biology and other subject are very helpful to revise the whole syllabus during exam days. The revision notes covers all important formulas and concepts given in the chapter. Even if you wish to have an overview of a chapter, quick revision notes are here to do if for you. These notes will certainly save your time during stressful exam days.