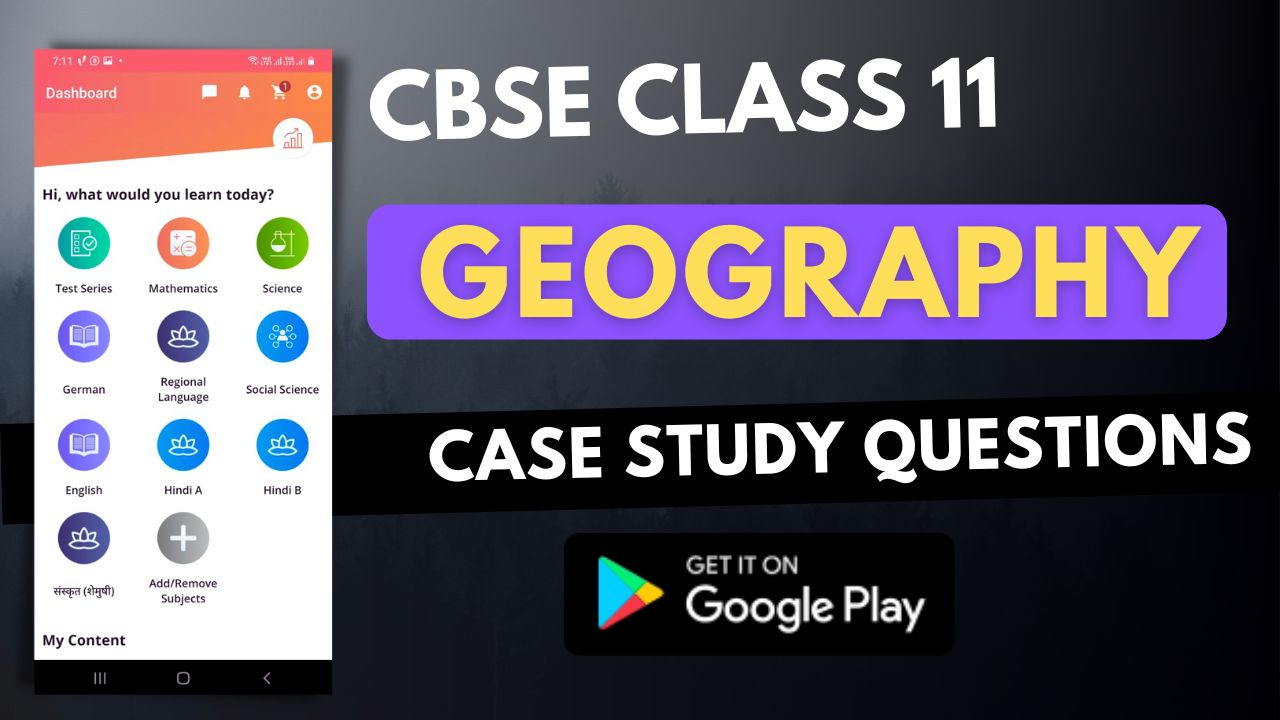 The syllabus of Class 11 Geography

The Case Study questions for Class 11 Geography are designed to test students’ ability to apply knowledge to real-world scenarios. You will need to use your critical thinking and problem-solving skills to come up with the best solution. Class 11 Geography case study questions are meant to challenge you and help you hone your skills. So, make sure you give them your best shot!

Read the passage/case study carefully and answer the questions:

The Indian monsoon is the most prominent of the world’s monsoon systems, and primarily affects India and its surrounding water bodies. It blows from the northeast during cooler months and reverses direction to blow from the southwest during the warmest months of the year. This process brings large amounts of rainfall to the region during June and July.

Read the passage/case study carefully and answer the questions:
The term ‘feudalism’ has been used by historians to describe the economic, legal, political and social relationships that existed in Europe in the medieval era. ‘Feud’ means ‘a piece of land’, it refers to the kind of society that developed in medieval France, and later in England and in southern Italy. In an economic sense, feudalism refers to a kind of agricultural production which is based on the relationship between lords and peasants. The latter cultivated their own land as well as that of the lord. The peasants performed labour services for the lords, who in exchange provided military protection. They also had extensive judicial control over peasants. Thus, feudalism went beyond the economic to cover the social and political aspects of life as well. Although its roots have been traced to practices that existed in the Roman Empire and during the age of the French king Charlemagne (742-814), feudalism as an established way of life in large parts of Europe may be said to have emerged later, in the eleventh century.

Feudalism refers to the kind of society that developed in medieval France, and later in England and in southern Italy. What do you understand by the medieval era?

(a) Period between the fifth and the fifteenth century

(b) Period between the tenth and the fifteenth century

(c) Period between the fifth and the nineteenth century

(d) Period between the sixth and the eleventh century

The word ‘feud’ is derived from which language?

Read the passage/case study carefully and answer any three questions:

The nobility had, in reality, a central role in social processes. This is because they controlled land. This control was the outcome of a practice called ‘vassalage’. The kings of France were linked to the people by ‘vassalage’, similar to the practice among the Germanic peoples, of whom the Franks were one. The big landowners – the nobles – were vassals of the king, and peasants were vassals of the landowners. A nobleman accepted the king as his seigneur (senior) and they made a mutual promise: the seigneur/lord would protect the vassal, who would be loyal to him. This relationship involved elaborate rituals and exchange of vows taken on the Bible in a church. At this ceremony, the vassal received a written charter or a staff or even a clod of earth as a symbol of the land that was being given to him by his master. The noble enjoyed a privileged status. He had absolute control over his property, in perpetuity. He could raise troops called ‘feudal levies’. The lord held his own courts of justice and could even coin his own money. He was the lord of all the people settled on his land. He owned vast tracts of land which contained his own dwellings, his private fields and pastures and the homes and fields of his tenant-peasants. His house was called a manor. His private lands were cultivated by peasants, who were also expected to act as footsoldiers in battle when required, in addition to working on their own farms.

Which of the following is incorrect with respect to given passage?

(a) A noble was lord of each and every person settled on his land.

(b) The first order held judicial authority and even the authority to issue coins.

(c) In reality, the nobility played a crucial part in social processes.

(d) The house of noble was known as manor.

What was the origin of the title “lord” for the nobility?

(a) It was meant as the one who provides military protection

(b) It was meant as the one who provides land

(c) It was meant as the one who provides bread

(d) It was meant as the one who provides land, bread and military protection

Pick the odd one out with respect to nobility.

(a) Cultivate their private fields themselves

(d) Coin his own money

MyCBSEguide provides Map work in CBSE class 11 geography which helps students understand and learn the subject better. The map work provided is of high quality and is designed to meet the needs of students.

MyCBSEguide offers a variety of features to make your note-taking experience easier than ever. For example, you can search for specific topics, access to notes, case study questions and so on. Plus, there’s a built-in system to keep track of your progress and ensure that you’re always up-to-date.

So why wait? Download the myCBSEguide app today and get the CBSE notes including Class 11 Geography Case study questions to ace your exams!