CBSE Question Paper 2011 class 10 Science conducted by Central Board of Secondary Education, New Delhi in the month of March 2011. CBSE previous year question papers with solution are available in myCBSEguide mobile app and cbse guide website. The Best CBSE App for students and teachers is myCBSEguide which provides complete study material and practice papers to cbse schools in India and abroad.

1. How many covalent bonds are there in a molecule of ethane, C H?

2. What is Tyndall effect?

3. What will happen if we kill all the organisms in one trophic level?

4. Why did United Nations act to control the production of chlorofluoro-carbons (CFCs) used in refrigerators?

(i) How do you calculate the possible valency of an element from the electronic configuration of its atoms?

(ii) Calculate the valency of an element X whose atomic number is 9.

5. How does the electronic configuration of an atom of an element relate to its position in the modem periodic table? Explain with one example.

6. How does the electronics configuration of an atom of an element relate to its position in the modern periodic table? Explain with one example.

7. State the two laws of reflection of light.

9. Explain why the planets do not twinkle but the stars twinkle.

10. Write Any two difference between binary fission and multiple fission in a tabular form as observed in cells of organisms.

11. Explain giving one example of each, the unisexual and the bisexual flowers.

13. What are non-renewable resources of energy? Give two examples of such resources.

14. Write one chemical equation to represent each of the following types of reactions of organic substances:

15. Two elements X and Y belong to group 1 and 2 respectively in the same period of periodic table. Compare them with respect to:

(i) the number of valence electrons in their atoms

(iv) the sizes of their atoms

(v) the formulae of their oxides

(vi) the formulae of their chlorides

16. Draw the ray diagram and also state the position, the relative size and the nature of image formed by a concave mirror when the objects placed at the centre of curvature of the mirror.

18. What eye defect is hypermetropia? Describe with a ray diagram how this defect of vision can be corrected by using an appropriate lens.

19. (a) List two sexually transmitted diseases in each of the following cases:

(b) How may the spread of such diseases be prevented?

20. Explain with examples how the following are evidences in favour of evolution in organisms.

22. Explain how equal genetic contribution of male and female parents is ensured in the progeny.

23. (a) In a tabular form, differentiate between ethanol and ethanoic acid under the following heads:

(b) Write a chemical reaction to show the dehydration of ethanol.

(a) What is a soap? Why are soaps not suitable for washing clothes when the water is hard?

(b) Explain the action of soap in removing an oily spot from a piece of cloth.

24. (a) If the image formed by a lens is diminished in size and erect, for all positions of the object, what type of lens is it?

(b) Name the point on the lens through which a ray of light passes undeviated.

(c) An object is placed perpendicular to the principalaxis of a convex lens of focal length 20 cm. The distance of the object from the lens is 30 cm. Find(i) the position(ii) the magnification and(iii) the nature of the image formed.

(a) One—half of a convex lens is covered with a black paper. Will such a lens produce an image of the complete object? Support your answer with a ray diagram.

(i) Draw the ray diagram.

(ii) Calculate the position and size of the image formed.

(iii) What is the nature of the image?

25. (a) Draw a diagram of the longitudinal section of a flower and label on it sepal, petal, ovary and stigma.

(b) Write the names of male and female reproductive parts of a flower.

(a) What is fragmentation in organisms? Name a multicellular organism which reproduces by this method.

26. To find the focal length of a concave mirror Rahul focuses a distant object with this mirror. The chosen object should be:

27. For finding the focal length of a convex lens by obtaining the image of a distant object, one should use as the object:

(2) window grill in the classroom

28. Mohan obtained a sharp inverted image of a distant tree on the screen placed behind the lens. He then moved the screen and tried to look through the lens in the direction of the object. He would see:

(1) a blurred image on the wall of the laboratory.

(3) no image as the screen has been removed.

(4) an inverted image of the tree at the focus of the lens. 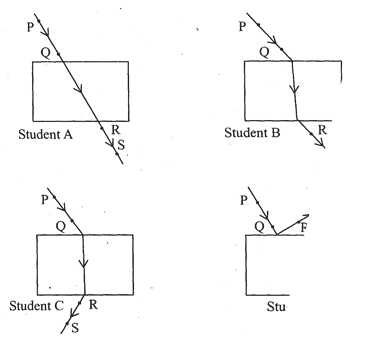 The correct emergent ray was traced by the student:

30. Rahim recorded the following sets of observations while tracing the path of a ray of light passing through a rectangular glass slab for different angles of incidence.

The correct observation is recorded at serial number:

31. The colour of an aqueous solution of zinc sulphate as observed in the laboratory is:

32. To show that zinc is a more active metal than copper, the correct procedure is to:

(1) add dilute nitric acid on strips of both the metals.

(2) observe transmission of heat through strips of zinc and copper.

(3) prepare solution of zinc sulphate and hang strip of copper into it.

(4) prepare solution of copper sulphate and hang strip of zinc into it.

35. On adding NaHCO, to acetic acid, a gas is evolved which tums lime water milky due to the formation of:

36. A yeast cell in which budding occurs was seen to have:

37. A student was given two permanent slides, one. of binary fission in amoeba and other of budding in yeast. He was asked to identify anyone difference in the nucleus of the two. One such difference, he identified correctly was:

(1) Presence of one nucleus in. amoeba, two in yeast cell and one in bud.

(2) Presence of two nuclei in centrally constricted amoeba, one in yeast cell and one in its bud.

(3) Presence of two distant nuclei in amoeba, one in yeast cell and two in bud.

(4) Presence of a single nucleus each in amoeba, yeast cell and its attached bud.

38. Binary fission is observed in which one of the following figures? 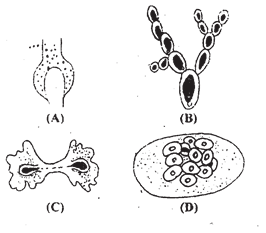 39. To determine the percentage of water absorbed by raisins, raisins are soaked in water for:

40. Raisins are wiped off gently before fmalweighing with help of:

41. The step(s) necessary for determining the percentage of water absorbed by raisins is/are:

(1) Raisins should be completely immersed in water

(2) Raisins should be soaked in water for sufficient time