CBSE Question Paper 2006 class 12 Informatics Practices conducted by Central Board of Secondary Education, New Delhi in the month of March 2006. CBSE previous year question papers with solution are available in myCBSEguide mobile app and cbse guide website. The Best CBSE App for students and teachers is myCBSEguide which provides complete study material and practice papers to cbse schools in India and abroad.

i. Explain the term Metadata using suitable example. (2)
ii. What is a Financial Accounting system? Name any two entities or tables that could be a part of this system. (2)
iii. What is feasibility study with reference to SDLC? Explain. (2)
iv. Explain the concept of object-oriented modeling. (2)
v. Define Data Warehousing using suitable example. (2)

i. What do you understand by the term Event-Driven Programming? Explain. (2)
ii. Write the names of any two properties and any two methods, which are common to the
checkbox object and option button object. (2)
iii. Differentiate between the Drive List Box and Dir List Box. Also name the most important
property of each of these controls, which needs to be set by the user. (2)
iv. What is the purpose of the Common Dialog control? List any two methods of the Common
Dialog Control. (2)
v. What do you understand by the term data-bound controls? Name any two data-bound
controls that can be used on a form. (2)

i. What do you understand by the term Equi – Join? Give an example. (2)
ii. Explain the difference between the SUBSTR and INSTR function of SQL with the help of an
example. (2)
iii. What are group functions of SQL? Name any two group functions. (2)
iv. Differentiate between the COMMIT and ROLLBACK commands of SQL.  (2)
v. Explain the usage of the IN OUT parameter of a PL/SQL procedure with the help of an
example. (2)

Q. 4. Read the following case study and answer the questions that follow: 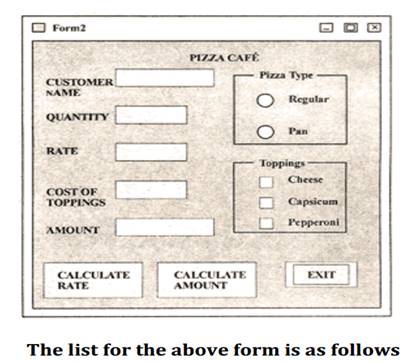 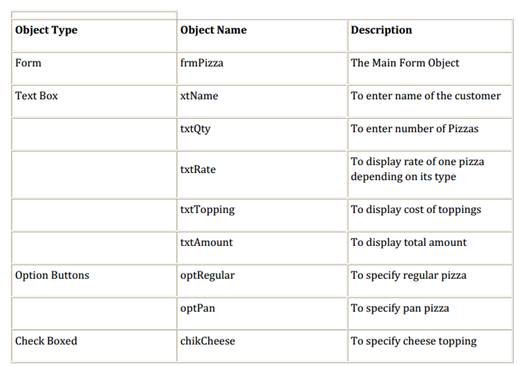 i. Write the commands to disable the textboxes txtKate, txt’l’opping, txt Amount and cmd Amount. (2)
ii. Write the code for cmd Rate to calculate the rate of the pizza and display it in txt Rate depending on the type of pizza selected by the customer. It should also enable the cmd Amount button. (4)
iii. Write the code for cmd Amount to calculate the total amount and display it in txt Amount. The total amount is calculated by first finding the cost of extra toppings selected by the customer. Remember that each extra topping costs Rs. 20 therefore if the user selects 2 toppings the cost of the toppings will be Rs. 40. Then add it to the rate and multiply the resultant amount by the quantity ordered.  (4)

iv. Write a Visual Basic procedure which takes a number as argument and dis plays whether it is prime or not. A prime number is one, which is not divisible by any number other than by 1 and by itself. [4]

Q. 6. Read the questions given below and answer accordingly:

ii. Find the errors from the following PL/SQL code and rewrite the corrected code underlining
the correction made. (2)
CREATE AS WELL AS REPLACE TRIGGER DEPT_UP
AFTER UPDATE ON DEPT FOR_EVERY ROW
DECLARE
v_num NUMBER (3);
BEGIN
SELECT COUNT (*) INTO v_num FROM Emp WHERE Dept ‘1O1’;
IF v_num > 5
Raise_application_error (—20001, ‘Cannot exceed 5’);
END;

iii. What do you understand by % ROWCOUNT with reference to cursors? What will happen if
you use the %ROWCOUNT attribute of a cursor that is not open? (2)

iv. Write a PL/SQL procedure called FACTORIAL that takes an integer as parameter, finds its
factorial and display it. (Factorial of a number is the product of all whole numbers less than
and equal to that number. For example, factorial of 4 = 4 x 3 x 2 x 1 = 24).  (4)

Q. 7. Answer the questions base on the table CLUB given below:

i. Write the SQL command to create the table Club including the constraints. (2)
ii. Write the SQL command to display the details of the all the members whose type is
“Permanent” and fees is more than Rs. 1000. (2)
iii. Write a Pl/SQL code to increase the fees by 5% for a member number accepted from the use if the type of the membership is “Temporary”. (3)
iv. Write Pl/SQL code using and explicit cursor to display the details of all the “permanent”
members whose age is greater than 50. The code should also display the average membership fees of all such members. (3)