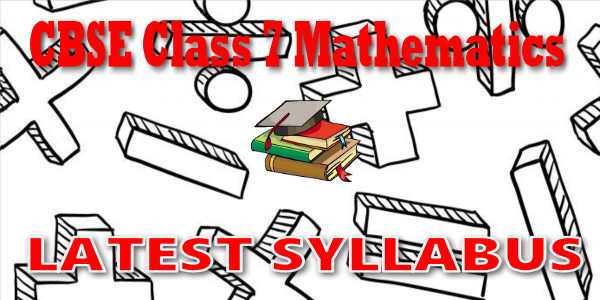 Course Structure for Class-VII
Number System (50 hrs.)
(i) Knowing our Numbers: Integers
• Multiplication and division of integers (through patterns). Division by zero is meaningless
• Properties of integers (including identities for addition & multiplication, commutative, associative, distributive) (through patterns). These would include examples from whole numbers as well. Involve expressing commutative and associative properties in a general form. Construction of counterexamples, including some by children. Counter examples like
• Subtraction is not commutative.
• Word problems including integers (all operations)

(ii) Properties of triangles:
• Angle sum property (with notions of proof & verification through paper folding, proofs using property of parallel lines, difference between proof and verification.)
• Exterior angle property
• Sum of two sides of a its third side
• Pythagoras Theorem (Verification only)

(vi) Construction (Using scale, protractor, compass)
• Construction of a line parallel to a given line from a point outside it. (Simple proof as remark with the reasoning of alternate angles)

• Construction of simple triangles. Like given three sides, given a side and two angles on it, given two sides and the angle between them.

Data handling (15 hrs.)
i. Collection and organization of data – choosing the data to collect for a hypothesis testing.
ii. Mean, median and mode of ungrouped data – understanding what they represent.
iii. Constructing barographs
iv. Feel of probability using data through experiments. Notion of chance in events like tossing coins, dice etc. Tabulating and counting occurrences of 1 through 6 in a number of
v. throws. Comparing the observation with that for a coin. Observing strings of throws, notion of randomness.