We think the first step is motivating yourself to revise. What are you trying to achieve here? What’s your ultimate goal? Make a schedule for your revision and be realistic about it. Figure out how much time you can spend on a task each day. The important part of exam preparation and the key to success, as the more you revise these notes. These revision notes are prepared by our finest and experienced teachers. You can download class 12 Computer Science Revision Notes in PDF format. These Revision Notes are also available in the myCBSEguide website and mobile app for free.
Object Oriented Programming in CPP (OLD) 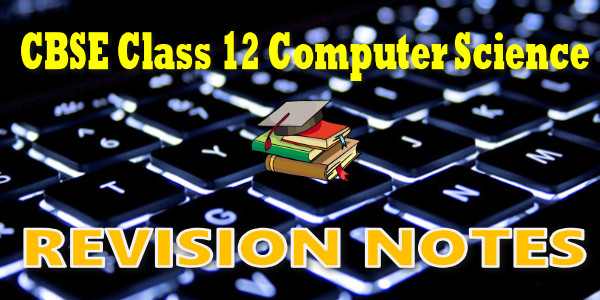 Key Notes for CBSE Board Students for Class 12. Important topics of all subjects are given in these CBSE notes. These notes will provide you overview of the chapter and important points to remember. These are very useful summary notes with neatly explained examples for best revision of the book.

CBSE quick revision note for class-12 Computer Science, Chemistry, Maths, Biology and other subject are very helpful to revise the whole syllabus during exam days. The revision notes covers all important formulas and concepts given in the chapter. Even if you wish to have an overview of a chapter, quick revision notes are here to do if for you. These notes will certainly save your time during stressful exam days.

Script Mode: In script mode, we type Python program in a file and then use interpreter to execute the content of the file.

Sequence: A sequence is an ordered collection of items, indexed by positive integers.

Logical operators: or, and, and not

Functions in Python: A function is named sequence of statement(s) that performs a computation.

of Python is extended as module(s) to a Programmer.

String: In python, consecutive sequence of characters is known as a string. An individual character in a string is accessed using a subscript (index).

Dictionaries: A dictionary is like a list, but more in general. In a list, index value is an integer, while in a dictionary index value can be any other data type and are called keys.

Tuples: A tuple is a sequence of values, which can be of any type and they are indexed by integer.

Object: clearly defines an entity in terms of its properties and behaviour.

Class: a blueprint of an object.

Encapsulation: combining of data and the functions associated with that data in a single unit

Data Hiding: the mechanism of hiding the data of a class from the outside world

Abstraction: providing only essential information to the outside world and hiding their background details

Inheritance: forming a new class (derived class) from an existing class (called the base class).

Polymorphism: ability to use an operator or function in various forms.

Static Binding: the linking of function call to the function definition is done during compilation of the program.

Dynamic Binding: the linking of function call to the function definition is done during the execution of the program.

Namespace: A mapping from names to objects. Examples of namespaces are built-in names, global names in a module and local names in function invocation

Scope: A region of Python program where a namespace is directly accessible.

In Python a name, storing any type of data, can refer to only one thing at a time.

The scope of a variable is its enclosing function, class or file.

The names always belong to the namespace where they are bound.

Names declared with global keyword have to be referred at the file level.

LEGB rule: when a name is encountered during the execution of the program, it searches for that name in the following order:

G. Global (module) - It searches for global modules or for names declared global

B. Built-in (Python) - Finally it checks for any built in functions in Python.

Class definitions should be given before it is referenced.

__init__ is a special method used to initialize the members of a class.

self is the first argument that is passed to the methods of a class.

The attributes - data and methods can be added to the class dynamically.

getattr(obj, name,[ default]): is used to access the attribute of the object

hasattr(obj,name): is used to check if an attribute exists or not

setattr(obj,name,value): is used to set an attribute with a value.

delattr(obj,name) : is used to delete an attribute

__doc__: returns the docstring of a class

__module__: specifies the module name in which the class is defined

__bases__: it gives a tuple containing base classes

__del__: is invoked when the module is being deleted

__str__: returns the string representation of the objects Private variables can only be accessed from inside the objects.

Static Method: is a method that does not obey the usual convention in which self, an instance of the class, is the first argument to the method.

Reference Counting: works by counting the number of times an object is referenced by other objects in the system. When an object's reference count reaches zero, Python collects it automatically.

Single Inheritance: In single inheritance a subclass is derived from a single base class.

Multilevel Inheritance: In multilevel inheritance, the derived class becomes the base of another class.

Multiple Inheritance: In this type of inheritance, the derived class inherits from one or more base classes.

Hierarchical Inheritance: In this type of inheritance, the base class is inherited by more than one class.

Hybrid Inheritance: This inheritance is a combination of multiple, hierarchical and multilevel inheritance.

Overriding Methods: The feature of overriding methods enables the programmer to provide specific implementation to a method in the subclass which is already implemented in the superclass.

Abstract Methods: An abstract method is a method declared in a parent class, but not implemented in it. The implementation of such a method can be given in the derived class.

75,000+ questions to practice only on myCBSEguide app

All Content and Intellectual Property is under Copyright Protection | myCBSEguide.com ©2007-2023