We think the first step is motivating yourself to revise. What are you trying to achieve here? What’s your ultimate goal? Make a schedule for your revision and be realistic about it. Figure out how much time you can spend on a task each day. The important part of exam preparation and the key to success, as the more you revise these notes. These revision notes are prepared by our finest and experienced teachers. You can download class 11 History Revision Notes in PDF format. These Revision Notes are also available in the myCBSEguide website and mobile app for free.
Writing and City Life

Go To Downloads
The Three Orders

Download CBSE Revision Notes for CBSE Class 11 History The Three Orders The Three Orders. Socio - economic and Political changes which occurred in western Europe between the 9th and 16th Centuries. After the fall of the Roman Empire, Many groups of Germanic People occupied regions of Italy, Spain and France. The three orders are three social categories : Christian priests, landowning nobles and peasants

Download CBSE Revision Notes for CBSE Class 11 History Changing Cultural Traditions Changing Cultural Traditions. From the fourteenth to the end of the seventeenth century towns were growing in many countries of Europe. Adistinct ' Urban Culture' also developed. Florence, Venice and Rome became centers of art and learning. The invention of printing at t h e same time made books and prints available to many people. A sense of history also developed in Europe

Go To Downloads
Paths to Modernisation 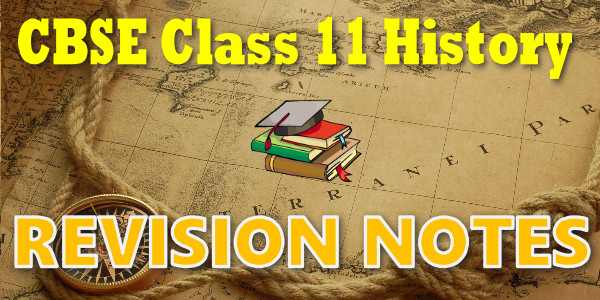 CBSE class-11 Key points and summary of the lessons are given under this section for Chem, Phy, Maths, Bio, Acc, Business study, Eco and other subjects. The notes include all concepts given in NCERT books and syllabus issued by CBSE for class-11. Keynotes are 'to the point' capsules for quick revision of the chapter. We have covered the whole syllabus in these notes.