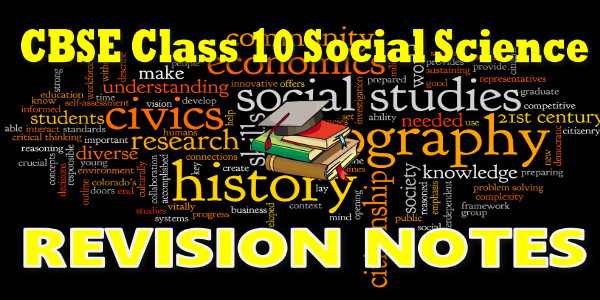 Key Notes for CBSE Board Students for Class 10. Important topics of all subjects are given in these CBSE notes. These notes will provide you overview of the chapter and important points to remember. These are very useful summary notes with neatly explained examples for best revision of the book.

Class-10 syllabus is divided into term-1 and term-2 so as the quick revision notes. The key points for both SA1 and SA2 are given under this download section. It includes notes for Mathematics, Science, Social Science and English. Revision notes comprises all important formulas and concepts from each and every chapter.

1. With this chapter, we resume the tour of democracy that we started last year.

2. An intelligent sharing of power among a legislature, executive and judiciary is very important to the design of a democracy.

3. We start with two stories from Belgium and Sri Lanka.

4. Both these stories are about how democracies handle demands for power sharing.

1. Belgium is a small country in Europe.

2. It has borders with Netherlands, France and Germany.

4. Another 40% people live in Wallonia region and speaks French.

5. Remaining 1% of the Belgians speak Germany.

6. In the capital city Brussels, 80% people speak French while 20% are Dutch – speaking.

7. The minority French – speaking community was relatively rich and powerful.

8. This was resented by the Dutch-speaking community who got the benefit of the economic development and education much later.

9. The tension between two communities was acuter in Brussels.

10. Like other nations in the south Asia region, Sri Lanka has a diverse population.

12. Among Tamils, there are two sub groups, Tamil natives of the country are called “Sri Lankan Tamils”; the rest whose forefathers came from India as a population workers during the colonial period, is called ‘Indian Tamils’.

1. Sri Lankan emerged as an independent country in 1948.

2. The leaders of the Sinhala community sought to secure dominance over the government by virtue of their majority.

3. In 1956, an Act was passed to recognize Sinhala as the only official language, thus disregarding Tamil.

4. A new constitution stipulated that the state shall protect and foster Buddhism.

5. All these coming measures, coming one after the other, gradually increased the feeling of alienation among the Sri Lankan Tamils.

6. As a result, the relations between the Sinhala and Tamil communities strained over time.

8. But their demand for more autonomy to provinces populated by the Tamils was repeatedly denied.

9. The distrust between the two communities turned into widespread conflict. It soon turned into CIVIL WAR.

10. The civil war caused a terrible setback to the social, cultural and economic life of the country.

1. Belgium recognized the existence of regional differences and cultural diversities.

2. Between 1970 and 1993, they amended their constitution four times so as to work out an arrangement that would enable everyone to live together within the same country.

4. In Belgium, the leaders have realized that the unity of the country is possible only by respecting the feelings and interests of different communities and regions.

5. Sri Lanka shows us a contrasting example. It shows us that if a majority community wants to force its dominance over others and refuses to share power, it can undermine the unity of the country.

Why is power sharing desirable?

1. Thus, two different sets of reasons can be given in favor of power sharing.

2. Firstly, power sharing is good because it helps to reduce the possibility of conflict between social groups.

3. There is a second, deeper reason why power sharing is good for democracy. Power sharing is very spirit of democracy. A democratic rule involves sharing power with those affected by its exercise, and who have to live with it effects.

4. Let us call the first set of reasons PRUDENTIAL and the second moral.

1. The idea of power sharing has emerged in opposition to the notions of undivided political power.

2. For a long time, it was believed that all power of a government must reside in one person or group of a person located at one place.

3. One basic principle of power sharing is that people are the source of all political power.

4. In a good democratic government, due respect is given to diverse groups and views that exist in a society.

5. Everyone has a voice in the shaping of public politics.

6. Therefore, it follows that in a democracy political power should be distributed among as many citizens as possible.

Let us look at some of the most common arrangements that we have or will come across.

3. Power may also be shared among different social groups, such as the religious and linguistic groups. ‘Community government’ is a good example of this arrangement.

4. Power sharing arrangement can also be seen in the way political parties, pressure groups and movements control or influence those in power.

75,000+ questions to practice only on myCBSEguide app

All Content and Intellectual Property is under Copyright Protection | myCBSEguide.com ©2007-2023