NCERT 10th class Mathematics book solutions are available in PDF format for free download. These ncert book chapter wise questions and answers are very helpful for CBSE board exam. CBSE recommends NCERT books and most of the questions in CBSE exam are asked from NCERT text books. Class 10 Mathematics chapter wise NCERT solution for Mathematics for all the chapters can be downloaded from our website and myCBSEguide mobile app for free. 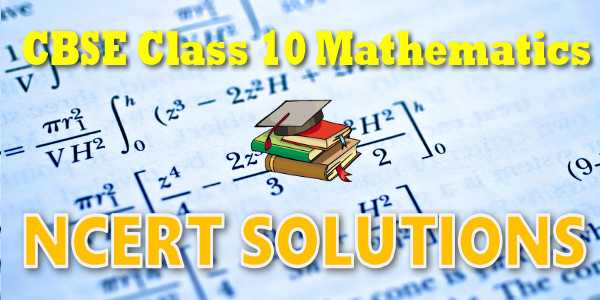 HISTORICAL FACTS, Determining the roots of polynomials, or "solving algebraic equations", is among the oldest problems in mathematics. However, the elegant and practical notation we use today only developed beginning in the 15th century. Before that, equations were written out in words. For example, an algebra problem from the Chinese Arithmetic in Nine Sections, begins "Three sheafs of good crop, two sheafs of mediocre crop, and one sheaf of bad crop are sold for 29 dou". We would write 3x + 2y + z = 29. The earliest known use of the equal sign is in Robert Recorde's The Whetstone of Witte, 1557. The signs + for addition, – for subtraction, and the use of a letter for an unknown appear in Michael Stifel's Arithmetica Integra, 1544. Rene Descartes, in La geometrie, 1637, introduced the concept of the graph of a polynomial equation. He popularized the use of letters from the beginning of the alphabet to denote constants and letters from the end of the alphabet to denote variables, as can be seen in the general formula for a polynomial, where the a's denote constants and x denotes a variable. Descartes introduced the use of superscripts to denote exponents as well.