Go To Downloads
Biodiversity and Conservation 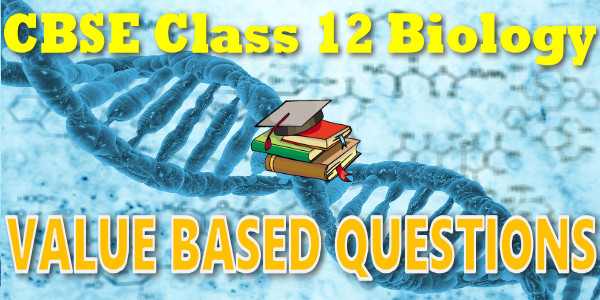 CBSE Value Based Questions and Answers for CBSE Exams

1. Taren was one of the best boys in the class. In spite of his efforts he was not doing well in class XI. His father wanted him to qualify for medical sciences. He got frustrated with his results and resorted to drugs. He started misbehaving with parents and friends in school.
His friends started neglecting him. The school authorities counselled Taren but to no
effect. His parents were upset and took him to a rehabilitation center. After a few months
he came back recovered.
a) What values did the Principal reflect through his initiative?
b) What is drug abuse?
c) Name some commonly abused drugs and their source.
d) What should be the attitude of his parents after his return? 1+1+2+1

Ans-a) The Principal showed his social liability and responsibility.

Ans-b) Intake of drugs for a non- medical purpose in the dose, strength, frequency and the
way of taking which impairs mental and physical functions of human being is drug
abuse.

Ans-c) i) Opium: from plant Papaver somniferum- its derivatives includes

2. Joy loves to play football and was selected as captain of the school team for the district
level tournament. He also does social work. He attended a blood donation camp to donate
blood and came to know that he was HIV positive. He lost interest in games and refused to
play or study. He started counting his days. He remained absent from school for a long
time. The Biology teacher visited his house and counselled him. Joy was back at school and
also played the tournament.
a) What sense of responsibility did the Biology teacher exhibit?
b) A person detected to be HIV positive should be isolated in the society? Do you agree?
Why/ Why not?
c) How is AIDS not spread?

Ans-a) The teacher shows social and moral responsibility along with his commitment to
service as a professional teacher.
Ans-b) No.
AIDS is not a contagious disease and does not spread until a blood/ body fluid
contact is established.
Ans-c) AIDS is not spread by: body contact in crowded place, hand shaking, sharing
telephone, meal, utensil or clothings, light kissing, using same toilet seat or even
swimming pool. It is not transmitted by blood sucking vectors or by coughing and
sneezing.

3. Ratan lives in a remote village. Suddenly he comes to know that his father has arranged
the marriage of his younger sister, who is only 14 years old, to a well- to -do middle aged
man living in a nearby village. Ratan objected to his father’s act. Ratan was not convinced
by his father’s idea that a better groom might not be available later. Ratan complained to
the village head and got the problem solved.
a) Did Ratan act properly by approaching the village head? Why/ Why not?
b) What biological considerations made Ratan object to his father’s decision?
c) What values and responsibilities did Ratan show?

Ans-a) Yes, it was necessary to stop the act since as per the government order, the

minimum marriageable age of a girl is 18 years.

laws. He expressed his views boldly for the right cause.

4. During a visit to Kedarnath, Mohun came across a young couple staying in the adjacent
room in the hotel. He learnt that the couple had been visiting different temples and
performing rituals to get a child. Mohun was astonished and explained to them about ART
which he had recently studied in Biology. The couple were happy and understood their
wrong approach and thanked Mohun.
a) Identify the values which Mohun has shown.
b) What is ART? What are the various method included in ART?
c) What are the limitations for which ART is not commonly accepted?

Ans-c) 1. These techniques require extremely high precision handling by
specialized professionals and expensive instrumentation. Therefore,
these facilities are presently available only in a very few centres in the
country.
2. Emotional, religious and social factors are also deterrents in the adoption
of these methods.

5. A teenage girl accidently became pregnant. She stopped coming to college and also
preferred to remain isolated. She was scared to inform her parents. One of her friends
Sweta met her and came to know about the problem. She took her to a doctor and got her
aborted. She convinced the parents and kept the matter concealed.
a) Did Sweta take the correct decision? What values did she show?
b) What is the medical term for abortion? What is the period which is considered safe for
abortion?
c) What prevention may be taken to avoid pregnancy?

Ans-a) Yes. Sweta expressed her helpful attitude and true friendship. She had social

commitment and sensitivity to act as per the situation.

iii) Any other   6. On world population day Rohit and his friends arranged an awareness campaign
programme in their locality. Some elderly people rebuked the children and asked them not
to talk on such things in public. The children convinced the elders about the need for the
programme and on understanding their point of view, they also joined the campaign.
a) What values did the elderly people and Rohit show on the occasion?
b) Why is such awareness programme necessary?
c) What role has the government played in controlling population explosion?
Ans-a) Rohit and his friends show understanding of population explosion, team work and
motivational capacity.
Ans-b) To understand the problem faced by the family and the nation due to increasing
population, simultaneously the benefits of having a small family.
Ans-c)

i) Public awareness through mass media

ii) Education at all levels

Increasing marriageable age (18 for girls, 21 for boys)v) Any other

7. Some parents wrote a complaint letter to the local municipality to remove all hoardings in
the city advertising the use of condoms and matters relating to AIDS prevention. The
children of these parents came to know about the matter and raised their voice against
removal of those hoardings. The parents were convinced by the awareness level of their
children and withdrew the complaint.
a) Parents considered the hoarding as sight pollution. Why do you disagree?
b) What value is promoted by the children protesting against their parents?
c) What are the methods by which AIDS spreads?
Ans-a) Since the awareness among our people has not reached to that extent that forceful
and constant reminding is not required. Our country is overpopulated and number
of AIDS is increasing too fast.

Ans-b)             Sense of understanding AIDS and application in life, National responsibility and

Use of contaminated needles and syringes

Use of contaminated razors or other instruments used for piercing

vii) Any other  8. Rita and her parents were watching a TV serial in the evening. During a commercial break,
an advertisement flashed on the screen which was promoting use of sanitary napkins. Rita
was still watching the TV. The parents got embarrassed and changed the channel. Rita
objected to her parents’ behaviour and explained the need for these advertisements.
a) What values did the parents show?
b) Briefly describe the phases of a menstrual cycle.

Ans-a) The parents were traditional but understood the need for such advertisements.

9. Anita was happy when she gave birth to her first child. Her in- laws were dissatisfied at her
not giving birth to a male child and blamed Anita. Anita tried to convince her in laws that
she had no role in the child’s gender. They understood the biological reason but were yet
to be satisfied. Anita’s husband took up the matter and convinced the parents.
a) What values did Anita’s husband show in the above situation?
b) What governs sex determination in humans? How is it different from birds?
c) Why can’t Anita be blamed for not giving birth to a male child?

Sex chromosomes. In human males it is XY and in female it is XX

In birds, male is ZZ while female is ZW.

Human females are homogametic i.e. produces only one type of gametes containing 22+X

Chromosomes only. Males are heterogametic and produce two types of gametes 22+X and

10. Mrs. Kavita was eager to know the sex of the foetus which her daughter- in- law was
carrying. She was so anxious that she could pay any amount for that. The doctor refused to
disclose the result of the test.
a) What value do you learn from the doctor’s act?
b) How can one know the sex of the foetus? How is it done?
c) Why is disclosing the sex of the foetus banned in our country?
Phases:To write details of the
different phases describing the
diagram
i) Menstrual phase
ii) Proliferative phase
iii) Secretory phase
Ans-a) The doctor is devoted to his duties and has professional ethics.
Ans-b) By amniocentesis
The process – step wise
Ans-c) In the past there have been numerous cases where the female foetus has been
aborted. This anti -feeling for the girl child is considered a crime. The number of
females to males is thereby reduced.