A worksheet is a specially prepared page of exercises designed to improve your knowledge or understanding of a particular subject. Worksheets, on the other hand, explain every single topic in a very simple manner which is easy for the student. As a student, it is very important to understand the basics of every single topic. These worksheets are prepared by our finest and experienced teachers. The CBSE Class 07 Mathematics worksheets are very helpful for CBSE exam. You can download Class 07 Mathematics worksheets in PDF format with Solution. These worksheets are also available in the myCBSEguide website and mobile app for free.
Integers

Download CBSE Worksheets for CBSE Class 07 Mathematics Integers Integers: Multiplication and division of integers (through patterns). Division by zero is meaningless. Properties of integers. subtraction is not commutative. Word problems including integers.

Go To Downloads
Lines and Angles

Go To Downloads
The Triangle and its Properties

Download CBSE Worksheets for CBSE Class 07 Mathematics The Triangle and its Properties The Triangle and its Properties: Angle sum property (with notions of proof & verification through paper folding, proofs using property of parallel lines, difference between proof and verification.), Exterior angle property. Sum of two sides of a it’s third side. Pythagoras Theorem.

Go To Downloads
Congruence of Triangles

Go To Downloads
Perimeter and Area

Go To Downloads
Exponents and Powers 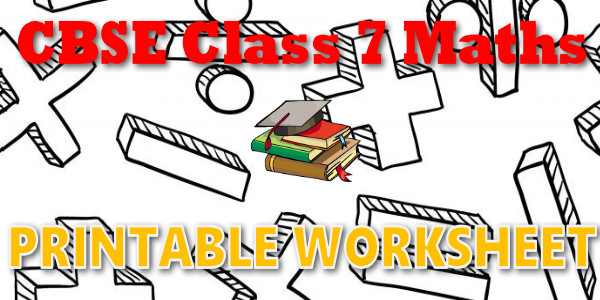