What Where How and When

Download CBSE Revision Notes for CBSE Class 06 Social Science What Where How and When What,Where How and When: (a) Familiarise the learner with the major developments to be studied. (b) Develop an understanding of the significance of geographical terms used during the time frame. (c) Illustrate the sources used to reconstruct history.

Go To Downloads
In the Earliest Cities

Download CBSE Revision Notes for CBSE Class 06 Social Science In the Earliest Cities In the Earliest Cities: (a) Appreciate the distinctive life in cities. (b) Identify the archaeological evidence of urban centres. (c) Understand how this is used to reconstruct processes such as craft production.

Go To Downloads
What Books and Burials Tell Us

Go To Downloads
Kingdoms Kings and an Early Republic

Go To Downloads
Ashoka the Emperor Who Gave Up War

Download CBSE Revision Notes for CBSE Class 06 Social Science New Empires and Kingdoms New Empires and Kingdoms: (a) Introduce the idea that strategies of expansion, and their logic, differ. (b) Explain the development of different administrative systems. (c) Understand how prasastis and caritas are used to reconstruct political history.

Go To Downloads
The Earth in the Solar System

Go To Downloads
Motions of the Earth

Go To Downloads
Major Domains of the Earth

Go To Downloads
Major Landforms of the Earth

Go To Downloads
Our Country India

Download CBSE Revision Notes for CBSE Class 06 Social Science Understanding Diversity Diversity (Understanding Diversity and Diversity and Discrimination): understand and appreciate various forms of diversity in their everyday environments, develop a sensitivity towards pluralism and interdependence, understand how prejudice can lead to discrimination, understand the difference between diversity and inequality, recognise that there are multiple identities within ourselves that we use in different contexts and that these can come into conflict with each other, understand that the Constitution compels us to respect diversity.

Go To Downloads
What is Government?

Download CBSE Revision Notes for CBSE Class 06 Social Science What is Government? Government (What Is Government and Key Elements of a Democratic Government): gain a sense of why government is required, recognise the need for universal adult franchise, appreciate need to make decisions with collective sanction, understand key elements that influence the functioning of democracy. 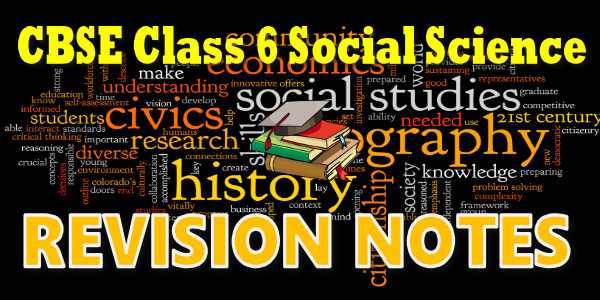 Key Notes for CBSE Board Students for Class 06 Important topics of all subjects are given in these CBSE notes. These notes will provide you overview of the chapter and important points to remember. These are very useful summary notes with neatly explained examples for best revision of the book.

CBSE class-06  Key points and summary of the lessons is given under this section for Science, Mathematics, Hindi, English, Social Science and other subjects. The notes includes all concepts given in NCERT books and syllabus issued by CBSE for class-06. Key notes are 'to the point' capsules for quick revision of the chapter. We have covered the whole syllabus in these notes.

CBSE Class 06 Social Science
Revision Notes
Chapter – 1 History
What, Where, How and When

History: History is a chronological account of events as they took place in the past.

Why should we study History:

Where did people live:

Why did people travel:

How was the name India derived:

How do we know about the past:

Why studied sources of History: