1. You read that one of the main functions of the judiciary is ‘upholding the law and Enforcing Fundamental Rights’. Why do you think an independent judiciary is necessary to carry out this important function?


Ans. The independence of the judiciary allows the courts to play a central role in ‘upholding the law and Enforcing Fundamental Rights’ as

2. Re-read the list of Fundamental Rights provided in Chapter 1. Why do you think the Right to Constitutional Remedies is connected to the idea of judicial review?

3. In the following illustration, fill in each tier with the judgments given by the various courts in the Sudha Goel case. Check your responses with others in the class. 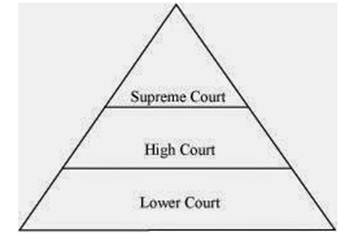 4. Keeping the Sudha Goel case in mind, tick the sentences that are true and correct the ones that are false.


(a) The accused took the case to the High Court because they were unhappy with the decision of the Trial Court.

(b) They went to the High Court after the Supreme Court had given its decision.

(c) If they do not like the Supreme Court verdict, the accused can go back again to the Trial Court.

5. Why do you think the introduction of Public Interest Litigation (PIL) in the 1980s is a significant step in ensuring access to justice for all?


Ans. PIL (Public Interest Litigation) is a mechanism devised to increase access to justice. The introduction of PIL in the 1980s is a significant step in ensuring access to justice for all because:

6. Re-read excerpts from the judgment on the Olga Tellis vs Bombay Municipal Corporation case. Now write in your own words what the judges meant when they said that the Right to Livelihood was part of the Right to Life.