NCERT Solutions for class 7 English The Story of Cricket book solutions are available in PDF format for free download. These ncert book chapter wise questions and answers are very helpful for CBSE exam. CBSE recommends NCERT books and most of the questions in CBSE exam are asked from NCERT text books. Class 7 English chapter wise NCERT solution for English part 1 and English part 2 for all the chapters can be downloaded from our website and myCBSEguide mobile app for free

NCERT solutions for English The Story of Cricket Download as PDF 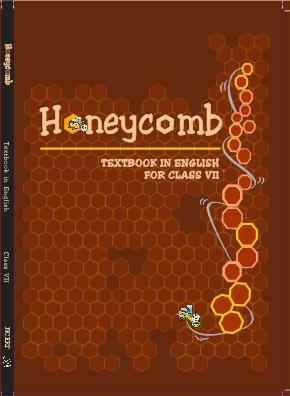 2. “There is a historical reason behind both these oddities.” In the preceding two paragraphs, find two words/phrases that mean the same as ‘oddities’.

3. How is a cricket bat different from a hockey stick?

Ans: In early days, cricket bat and hockey stick had very slight difference. Now, hockey stick is made of single piece of wood and curved at bottom while cricket bat is flat and straight and made up of two pieces, the blade and the handle.

Comprehension Check
Write True or False against each of the following sentences.
(i) India joined the world of Test cricket before Independence.
(ii) The colonisers did nothing to encourage the Parsis in playing cricket.
(iii) Palwankar Baloo was India’s first Test captain.
(iv) Australia played its first Test against England as a sovereign nation.

Comprehension Check
1. A ‘professional’ cricket player is one who makes a living by playing cricket. Find the opposite of ‘professional’ in the last paragraph.

3. “…the men for whom the world is a stage”.
(i) It refers to the famous cricket fields in the world.
(ii) It means that there are many cricket playing countries in the world.
(iii) It implies that cricketers are like actors and every cricket ground is like a stage on which the drama of cricket is enacted the world over.
Mark the right answer.

Ans: (iii) It implies that cricketers are like actors and every cricket ground is like a stage on which the drama of cricket is enacted the world over.

Working with the Text
1. Name some stick-and-ball games that you have witnessed or heard of.

2. The Parsis were the first Indian community to take to cricket. Why?

3. The rivalry between the Parsis and the Bombay Gymkhana had a happy ending for the former. What does ‘a happy ending’ refer to?

Ans: The ‘happy ending’ refers to the victory of a Parsis team over the Bombay Gymkhana in a game of cricket in 1889, just four years after the foundation of the Indian National Congress in 1885.

4. Do you think cricket owes its present popularity to television? Justify your answer.

Ans: Definitely, cricket owes its present popularity to television. It helps in expansion of its audience as well as popularity to different countries and even in small towns and villages by broadcasting services. Matches played at one place can be viewed worldwide which resulted in its popularity as well as finance.

5. Why has cricket a large viewership in India, not in China or Russia?

6. What do you understand by the game’s (cricket) ‘equipment’?

Ans: The things which are necessary for playing the game are game’s (cricket) ‘equipment’. Like in cricket, ball, bat, wicket, helmets, gloves, pads are the requires things to play the match.

7. How is Test cricket a unique game in many ways?

Ans: Test Game is Unique in the sense that even though it is played for five days, It ends in a draw. No other modern team sport takes even half as much time to complete.

8. How is cricket different from other team games?

Ans: Cricket is different from other team games because it goes on for a longer time than any other games. It also has different formats like Test Cricket, One-day International and T-20 match and each game takes different time to get completed. Another a strange feature of Cricket is the play ground that it can be of any size, only the length of the pitch is specified while in other games the dimensions of the playing area is specified.

9. How have advances in technology affected the game of cricket?

Ans: After the advancement of technology, players started wearing more protective equipment. The invention of vulcanized rubber made possible the use of pads. Satellites helped in increasing the popularity and audience of cricket. One can now watch live matches while sitting at home. Technology also helped in taking fair decisions while playing the game.

10. Explain how cricket changed with changing times and yet remained unchanged in some ways.

Ans: With the change of time, technology get more advanced and players started wearing protective equipment. Earlier the bat was made of one piece, today it has a separate blade and handle. Decisions became more fair with motion sensor cameras. But still, both bat and ball are handmade, not industrially manufactured.

• Twelve words associated with cricket are hidden in this grid.
• Six can be found horizontally and the remaining six vertically.
• Two words have been found for you.
Clues to the hidden words are given below.
Horizontal: six deliveries, four runs, attacked while out of arena, no result, stumps, fielder to the off side of the wicketkeeper
Vertical: stumps flying, back to the pavilion, a lofty one, mid-air mishap, not even one out of six, goes with bat 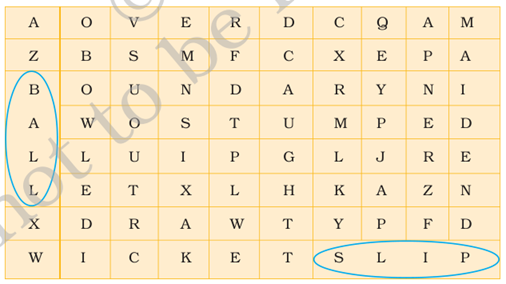 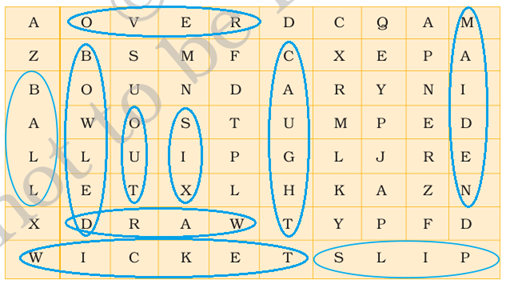 3. Use the following phrases appropriately in place of the italicised words in the sentences given below.