NCERT Solutions for Class 6 Social Science History What books and burials tell us book solutions are available in PDF format for free download. These ncert book chapter wise questions and answers are very helpful for CBSE exam. CBSE recommends NCERT books and most of the questions in CBSE exam are asked from NCERT textbooks. Class 6 Social Science chapter wise NCERT solution for Social Science part 1 part 2 and Part 3  for all the chapters can be downloaded from our website and myCBSEguide mobile app for free.

History – Our Pasts Part I

Geography – The Earth Our Habitat Part I

(a) Slaves were used for
Answer: various kinds of work.
(b) Megaliths are found in
Answer: (b) throughout the Deccan ,south India, in the north- east and Kashmir.
(c) Stone circles or boulders on the surface were used to —
Answer: (c) cover and indicate the burial places.
(d) Port-holes were used for ——
Answer: (d) Port-holes were the openings for entering the burial places.
(e) People at Inamgaon ate ———
Answer: (e) Fruits (ber, amla, jamun, dates and a variety of berries), cereals (seeds of wheat, barley, rice, pulses, millets, peas and sesame) and meat.

Question 3. In what ways are the books we read today different from the Rigveda?

Answer. The books we use today are written, printed and then read, whereas Rigveda is the oldest of all Vedas and is supposed to have been composed about 3,500 years ago. It was recited and heard and passed on from one generation to another. It was written down several centuries after it was first composed and printed less than 200 years ago. It provides most of the information regarding the early Vedic period. 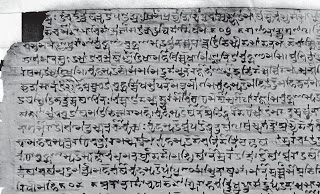 Question 4. What kind of evidence from burials do archaeologists use to find out whether there were social differences amongst those who were buried?

Answer. Archaeologists have found burial places which help them to reconstruct the past and tell about the society. At Brahmagiri, the archaeologists have found out a skeleton buried with 33 gold beads, 2 stone beads, 4 copper bangles and one conch shell. Some skeletons were buried with more pots while, other skeletons have only a few pots. These findings suggest that there was some difference in status amongst the people who were buried.

Question 5. In what ways do you think that the life of a raja was different from that of a dasa or dasi?

Answer. The words like’ raja’,’dasa’ and ‘dasi’ are used to describe the people found in the Rig Veda.The raja is the elected ruler of a tribe called jana. He did not have capitals, palaces or armies, nor did he collect taxes. Generally, the sons did not automatically succeed fathers as rajas. They managed with voluntary contributions (bali) made by the members of the tribe. The raja took decision with the consent of sabha and samiti, which were tribal assemblies.There were people who did not perform sacrifices and probably spoke different languages. Later, the term came to mean dasa (and the feminine dasi) or slave. Slaves were men and women captured in the war. They were treated as the property of the owners who could make them do any kind of work they wanted.

Question 6. Find out whether your school library has a collection of books on religion, and list the names of five books from this collection.

Question 7. Write down a short poem or song that you have memorized. Did you hear or read the poem or song? How did you learn it by heart?

Answer: (Do it yourself. Refer to an example) A Song which we have memorized is a song from film Jagriti (1954), sung and written by the legendary poet and singer kavi .We heard and saw this song in film Jagriti, 2-3 times on TV. Also during Independence Day and Republic Day celebrations, this song is very often broadcasted by All India Radio and even telecasted by Door Darshan on TV.

Question 8. In the Rigveda, people were described in terms of the work they did and the languages they spoke. In the table below, fill in the names of six people you know, choosing three men and three women. For each of them, mention the work they do and the language they speak. Would you like to add anything else to the description?