Download NCERT solutions for Work Energy and Power  as PDF.

1. The sign of work done by a force on a body is important to understand. State carefully if the following quantities are positive or negative:

(a) Work done by a man in lifting a bucket out of a well by means of a rope tied to the bucket.

(b) Work done by gravitational force in the above case,

(c) Work done by friction on a body sliding down an inclined plane,

(d) Work done by an applied force on a body moving on a rough horizontal plane with uniform velocity,

(e) Work done by the resistive force of air on a vibrating pendulum in bringing it to rest.

2. A body of mass 2 kg initially at rest moves under the action of an applied horizontal force of 7 N on a table with coefficient of kinetic friction = 0.1.

(d) Change in kinetic energy of the body in 10 s, and interpret your results. 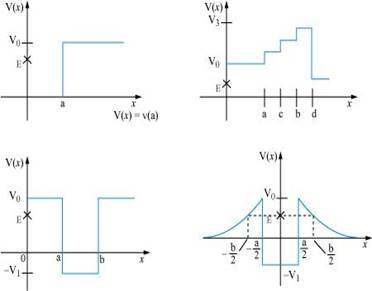 4. The potential energy function for a particle executing linear simple harmonic motion is given by V(x) =

(a) The casing of a rocket in flight burns up due to friction. At whose expense is the heat energy required for burning obtained? The rocket or the atmosphere?

(c) An artificial satellite orbiting the earth in very thin atmosphere loses its energy gradually due to dissipation against atmospheric resistance, however small. Why then does its speed increase progressively as it comes closer and closer to the earth?

(a) When a conservative force does positive work on a body, the potential energy of the body increases/decreases/remains unaltered.

(b) Work done by a body against friction always results in a loss of its kinetic/potential energy.

(c) The rate of change of total momentum of a many-particle system is proportional to the external force/sum of the internal forces on the system.

(d) In an inelastic collision of two bodies, the quantities which do not change after the collision are the total kinetic energy/total linear momentum/total energy of the system of two bodies.

7. State if each of the following statements is true or false. Give reasons for your answer.

(a) In an elastic collision of two bodies, the momentum and energy of each body is conserved.

(b) Total energy of a system is always conserved, no matter what internal and external forces on the body are present.

(c) Work done in the motion of a body over a closed loop is zero for every force in nature.

(a) In an elastic collision of two billiard balls, is the total kinetic energy conserved during the short time of collision of the balls (i.e. when they are in contact)?

(b) Is the total linear momentum conserved during the short time of an elastic collision of two balls?

(c) What are the answers to (a) and (b) for an inelastic collision?

9. A body is initially at rest. It undergoes one-dimensional motion with constant acceleration. The power delivered to it at time t is proportional to

10. A body is moving unidirectionally under the influence of a source of constant power. Its displacement in time t is proportional to

11. A body constrained to move along the z-axis of a coordinate system is subject to a constant force F given by

are unit vectors along the

axis of the system respectively. What is the work done by this force in moving the body a distance of 4 m along the

12. An electron and a proton are detected in a cosmic ray experiment, the first with kinetic energy 10 keV, and the second with 100 keV. Which is faster, the electron or the proton? Obtain the ratio of their speeds. (electron mass =

13. A rain drop of radius 2 mm falls from a height of 500 m above the ground. It falls with decreasing acceleration (due to viscous resistance of the air) until at half its original height, it attains its maximum (terminal) speed, and moves with uniform speed thereafter. What is the work done by the gravitational force on the drop in the first and second half of its journey? What is the work done by the resistive force in the entire journey if its speed on reaching the ground is

14. A molecule in a gas container hits a horizontal wall with speed

and angle 30° with the normal, and rebounds with the same speed. Is momentum conserved in the collision? Is the collision elastic or inelastic?

15. A pump on the ground floor of a building can pump up water to fill a tank of volume 30

in 15 min. If the tank is 40 m above the ground, and the efficiency of the pump is 30%, how much electric power is consumed by the pump?

16. Two identical ball bearings in contact with each other and resting on a frictionless table are hit head-on by another ball bearing of the same mass moving initially with a speed V. If the collision is elastic, which of the following figure is a possible result after collision? 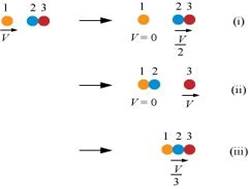 17. The bob A of a pendulum released from 30° to the vertical hits another bob B of the same mass at rest on a table as shown in Fig. 6.15. How high does the bob A rise after the collision? Neglect the size of the bobs and assume the collision to be elastic. 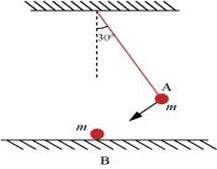 18. The bob of a pendulum is released from a horizontal position. If the length of the pendulum is 1.5 m, what is the speed with which the bob arrives at the lowermost point, given that it dissipated 5% of its initial energy against air resistance?

19. A trolley of mass 300 kg carrying a sandbag of 25 kg is moving uniformly with a speed of 27 km/h on a frictionless track. After a while, sand starts leaking out of a hole on the floor of the trolley at the rate of 0.05

. What is the speed of the trolley after the entire sand bag is empty?

20. A body of mass 0.5 kg travels in a straight line with velocity

21. The blades of a windmill sweep out a circle of area A.

(a) If the wind flows at a velocity v perpendicular to the circle, what is the mass of the air passing through it in time t?

(b) What is the kinetic energy of the air?

(c) Assume that the windmill converts 25% of the wind’s energy into electrical energy, and that A =

. What is the electrical power produced?

22. A person trying to lose weight (dieter) lifts a 10 kg mass, one thousand times, to a height of 0.5 m each time. Assume that the potential energy lost each time she lowers the mass is dissipated.

(a) How much work does she do against the gravitational force?

J of energy per kilogram which is converted to mechanical energy with a 20% efficiency rate. How much fat will the dieter use up?

23. A family uses 8 kW of power. (a) Direct solar energy is incident on the horizontal surface at an average rate of 200 W per square meter. If 20% of this energy can be converted to useful electrical energy, how large an area is needed to supply 8 kW? (b) Compare this area to that of the roof of a typical house.

strikes a block of wood of mass 0.4 kg and instantly comes to rest with respect to the block. The block is suspended from the ceiling by means of thin wires. Calculate the height to which the block rises. Also, estimate the amount of heat produced in the block.

25. Two inclined frictionless tracks, one gradual and the other steep meet at A from where two stones are allowed to slide down from rest, one on each track (Fig. 6.16). Will the stones reach the bottom at the same time? Will they reach there with the same speed? Explain. Given

26. A 1 kg block situated on a rough incline is connected to a spring of spring constant 100

Nm-1as shown in Fig. 6.17. The block is released from rest with the spring in the unstretched position. The block moves 10 cm down the incline before coming to rest. Find the coefficient of friction between the block and the incline. Assume that the spring has a negligible mass and the pulley is frictionless.

27. A bolt of mass 0.3 kg falls from the ceiling of an elevator moving down with an uniform speed of 7

29. Which of the following potential energy curves in Fig. 6.18 cannot possibly describe the elastic collision of two billiard balls? Here r is the distance between centres of the balls.

Show that the two-body decay of this type must necessarily give an electron of fixed energy and, therefore, cannot account for the observed continuous energy distribution in the

[Note: The simple result of this exercise was one among the several arguments advanced by W. Pauli to predict the existence of a third particle in the decay products of

decay. This particle is known as neutrino. We now know that it is a particle of intrinsic spin ½ (like e-, p or n), but is neutral, and either massless or having an extremely small mass (compared to the mass of electron) and which interacts very weakly with matter. The correct decay process of neutron is: n → p + e-+ v]