Download NCERT solutions for System of Particles and Rotational Motion Part 2  as PDF.

22. As shown in Fig.7.40, the two sides of a step ladder BA and CA are 1.6 m long and hinged at A. A rope DE, 0.5 m is tied half way up. A weight 40 kg is suspended from a point F, 1.2 m from B along the ladder BA. Assuming the floor to be frictionless and neglecting the weight of the ladder, find the tension in the rope and forces exerted by the floor on the ladder. (Take g = 9.8

(Hint: Consider the equilibrium of each side of the ladder separately.) 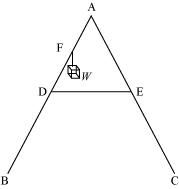 23. A man stands on a rotating platform, with his arms stretched horizontally holding a 5 kg weight in each hand. The angular speed of the platform is 30 revolutions per minute. The man then brings his arms close to his body with the distance of each weight from the axis changing from 90cm to 20cm. The moment of inertia of the man together with the platform may be taken to be constant and equal to 7.6 kg

(a) What is his new angular speed? (Neglect friction.)

(b) Is kinetic energy conserved in the process? If not, from where does the change come about?

24. A bullet of mass 10 g and speed 500 m/s is fired into a door and gets embedded exactly at the centre of the door. The door is 1.0 m wide and weighs 12 kg. It is hinged at one end and rotates about a vertical axis practically without friction. Find the angular speed of the door just after the bullet embeds into it.

(Hint: The moment of inertia of the door about the vertical axis at one end is

25. Two discs of moments of inertia

about their respective axes (normal to the disc and passing through the centre), and rotating with angular speeds

are brought into contact face to face with their axes of rotation coincident.

(a) What is the angular speed of the two-disc system?

(b) Show that the kinetic energy of the combined system is less than the sum of the initial kinetic energies of the two discs. How do you account for this loss in energy? Take

26. (a) Prove the theorem of perpendicular axes.

(Hint: Square of the distance of a point (x, y) in the x–y plane from an axis through the origin perpendicular to the plane is

(b) Prove the theorem of parallel axes.

(Hint: If the centre of mass is chosen to be the origin

27. Prove the result that the velocity v of translation of a rolling body (like a ring, disc, cylinder or sphere) at the bottom of an inclined plane of a height h is given by

28. A disc rotating about its axis with angular speed

is placed lightly (without any translational push) on a perfectly frictionless table. The radius of the disc is R. What are the linear velocities of the points A, B and C on the disc shown in Fig. 7.41? Will the disc roll in the direction indicated? 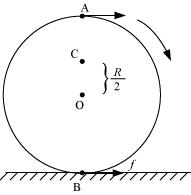 29. Explain why friction is necessary to make the disc in Fig. 7.41 roll in the direction indicated.

(b) What is the force of friction after perfect rolling begins?

30. A solid disc and a ring, both of radius 10 cm are placed on a horizontal table simultaneously, with initial angular speed equal to 10 π rad

. Which of the two will start to roll earlier? The co-efficient of kinetic friction is

31. A cylinder of mass 10 kg and radius 15 cm is rolling perfectly on a plane of inclination 30°. The coefficient of static friction

(a) How much is the force of friction acting on the cylinder?

(b) What is the work done against friction during rolling?

(c) If the inclination

of the plane is increased, at what value of

does the cylinder begin to skid, and not roll perfectly?

32. Read each statement below carefully, and state, with reasons, if it is true or false;

(a) During rolling, the force of friction acts in the same direction as the direction of motion of the CM of the body.

(b) The instantaneous speed of the point of contact during rolling is zero.

(c) The instantaneous acceleration of the point of contact during rolling is zero.

(e) A wheel moving down a perfectly frictionless inclined plane will undergo slipping (not rolling) motion.

is the velocity of the I th particle relative to the centre of mass.

Also, prove using the definition of the centre of mass

Where K is the total kinetic energy of the system of particles,

rest of the notation is the standard notation used in the chapter. Note

can be said to be angular momenta, respectively, about and of the centre if mass of the system of particles.

is the sum of all external torques acting on the system about the centre of mass.

(Hint: Use the definition of centre of mass and Newton’s Third Law. Assume the internal forces between any two particles act along the line joining the particles.)