NCERT Solutions For Class 11 physics Law of Motion Part 2 Class book solutions are available in PDF format for free download. These ncert book chapter wise questions and answers are very helpful for CBSE exam. CBSE recommends NCERT books and most of the questions in CBSE exam are asked from NCERT text books. Class 11 Physics chapter wise NCERT solution for Physics part 1 and Physics part 2 for all the chapters can be downloaded from our website and myCBSEguide mobile app for free.

Download NCERT solutions for  Law of Motion Part-2 as PDF.

21. A stone of mass 0.25 kg tied to the end of a string is whirled round in a circle of radius 1.5 m with a speed of 40 rev./min in a horizontal plane. What is the tension in the string? What is the maximum speed with which the stone can be whirled around if the string can withstand a maximum tension of 200 N?

(a) the stone moves radially outwards,

(b) the stone flies off tangentially from the instant the string breaks,

(c) the stone flies off at an angle with the tangent whose magnitude depends on the speed of the particle?

(a) a horse cannot pull a cart and run in empty space,

(b) passengers are thrown forward from their seats when a speeding bus stops suddenly,

(c) it is easier to pull a lawn mower than to push it,

(d) a cricketer moves his hands backwards while holding a catch.

24. Figure 5.17 shows the position-time graph of a body of mass 0.04 kg. Suggest a suitable physical context for this motion. What is the time between two consecutive impulses received by the body? What is the magnitude of each impulse?

25. Figure 5.18 shows a man standing stationary with respect to a horizontal conveyor belt that is accelerating with

. What is the net force on the man? If the coefficient of static friction between the man’s shoes and the belt is 0.2, up to what acceleration of the belt can the man continue to be stationary relative to the belt? (Mass of the man = 65 kg.)

26. A stone of mass m tied to the end of a string revolves in a vertical circle of radius R. The net forces at the lowest and highest points of the circle directed vertically downwards are: [Choose the correct alternative] 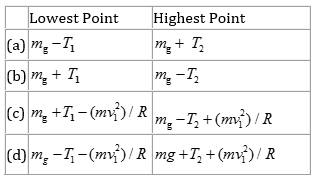 27. A helicopter of mass 1000 kg rises with a vertical acceleration of

. The crew and the passengers weigh 300 kg. Give the magnitude and direction of the

(a) force on the floor by the crew and passengers,

(b) action of the rotor of the helicopter on the surrounding air,

(c) force on the helicopter due to the surrounding air.

28. A stream of water flowing horizontally with a speed of

gushes out of a tube of cross-sectional area

, and hits a vertical wall nearby. What is the force exerted on the wall by the impact of water, assuming it does not rebound?

29. Ten one-rupee coins are put on top of each other on a table. Each coin has a mass m. Give the magnitude and direction of

(a) the force on the

coin (counted from the bottom) due to all the coins on its top,

(b) the force on the

coin by the eighth coin,

(c) the reaction of the

30. An aircraft executes a horizontal loop at a speed of 720 km/h with its wings banked at 15°. What is the radius of the loop?

31. A train runs along an unbanked circular track of radius 30 m at a speed of 54 km/h. The mass of the train is

kg. What provides the centripetal force required for this purpose – The engine or the rails? What is the angle of banking required to prevent wearing out of the rail?

32. A block of mass 25 kg is raised by a 50 kg man in two different ways as shown in Fig. 5.19. What is the action on the floor by the man in the two cases? If the floor yields to a normal force of 700 N, which mode should the man adopt to lift the block without the floor yielding?

(a) climbs up with an acceleration of

(b) climbs down with an acceleration of

(c) climbs up with a uniform speed of

(d) falls down the rope nearly freely under gravity?

(Ignore the mass of the rope).

34. Two bodies A and B of masses 5 kg and 10 kg in contact with each other rest on a table against a rigid wall (Fig. 5.21). The coefficient of friction between the bodies and the table is 0.15. A force of 200 N is applied horizontally to A. What are (a) the reaction of the partition (b) the action-reaction forces between A and B? What happens when the wall is removed? Does the answer to (b) change, when the bodies are in motion? Ignore the difference between

35. A block of mass 15 kg is placed on a long trolley. The coefficient of static friction between the block and the trolley is 0.18. The trolley accelerates from rest with 0.5

for 20 s and then moves with uniform velocity. Discuss the motion of the block as viewed by (a) a stationary observer on the ground, (b) an observer moving with the trolley.

36. The rear side of a truck is open and a box of 40 kg mass is placed 5 m away from the open end as shown in Fig. 5.22. The coefficient of friction between the box and the surface below it is 0.15. On a straight road, the truck starts from rest and accelerates with 2

. At what distance from the starting point does the box fall off the truck? (Ignore the size of the box).

37. A disc revolves with a speed of

rev/min, and has a radius of 15 cm. Two coins are placed at 4 cm and 14 cm away from the centre of the record. If the co-efficient of friction between the coins and the record is 0.15, which of the coins will revolve with the record?

38. You may have seen in a circus a motorcyclist driving in vertical loops inside a ‘death-well’ (a hollow spherical chamber with holes, so the spectators can watch from outside). Explain clearly why the motorcyclist does not drop down when he is at the uppermost point, with no support from below. What is the minimum speed required at the uppermost position to perform a vertical loop if the radius of the chamber is 25 m?

39. A 70 kg man stands in contact against the inner wall of a hollow cylindrical drum of radius 3 m rotating about its vertical axis with 200 rev/min. The coefficient of friction between the wall and his clothing is 0.15. What is the minimum rotational speed of the cylinder to enable the man to remain stuck to the wall (without falling) when the floor is suddenly removed?

40. A thin circular loop of radius R rotates about its vertical diameter with an angular frequency

. Show that a small bead on the wire loop remains at its lowermost point for

.What is the angle made by the radius vector joining the centre to the bead with the vertical downward direction for