1.1. Look at the picture carefully and answer the questions given below: 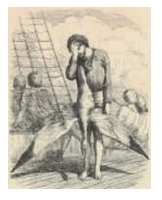 What can you see in the picture? Does the man look happy?
Give reasons for your answer.
Ans: There is a distressed man standing in the company of a few other men, who seem to be on board a ship. The man, definitely, doesn’t look happy. He seems to be deep in sorrow, because his neck is hung low and his hand slapped on his forehead.

1.4. What is an albatross?
Ans: An albatross is a large sea-bird with a wing span of about 4m.

4. Here are some of the archaic words used in the poem; can you match them with the words used in Modern English Language that mean the same? The first one has been done for you as an example:

5. Using the words given above rewrite Part 1 of the poem in your own words. The first stanza has been done as an example:
It is an ancient Mariner,
And he stoppeth one of three.
‘By thy long grey beard and glittering eye,
Now wherefore stopp’st thou me?
An old sailor stopped one of the three people passing by, who asked: “Old man, with your long grey beard and glittering eye, why are you stopping me?”
Ans: An old sailor stopped one of the three people passing by, who asked: “Old man, with your long grey beard and glittering eye, why are you stopping me? The bridegroom’s doors are open and I am one of the next family members. The guests have arrived, the feast is set. Can’t you hear the merriment?”
The sailor held him with his skinny hand and said: “There was a ship.” The wedding guest, disgustingly said, “Let go of me, you lunatic person,” and dropped his hand.
However, the sailor captivated his attention with his glittering eye; the wedding guest stood still. He was all ears to the old sailor, just like a three years old child, because now the mariner had his will.
The wedding guest was left with no choice but to listen to the ancient sailor. Thus began the narration of the ancient mariner. “There was a loud cheer on board, and the harbor has clear, for the sun to rise above the church, the hill, the lighthouse.
The sun came up upon the left and shone bright all day, and set on the right, going down the sea. The sun rose higher and higher everyday till it touched the mast on noon.”
The Wedding Guest beat his breast in impatience because he could hear the loud musical instrument being played.
The bride had started walking down the hall. She was as red as the rose. Before her went a merry procession of singers and musicians.
The wedding guest didn’t have a choice but to hear. Thus continued the mariner: “Then came the storm, severe and strong. The storm overtook them, and chased the ship southwards.
The cruel torturous ways of the storm is described here. The storm blew harsh, yelled and chased them towards south. The ship’s steer hung low.
They witnessed both mist and snow. The weather became wondrous cold with ice everywhere as bright and clear as emerald.
The floating ice and steep sides of the ice-bergs formed a dismayed sheen, that is, a smooth bright surface of ice.
There was ice all around them. The ice cracked, growled, roared and howled, like noises of a person in a fainting fit.
Then, the albatross arrived through the fog. It was hailed in God’s name, as a Christian soul.
It ate the food it had never eaten and flew round the ship. Then, a miracle occurred, when the ice cracked and the helmsman could steer the ship through the ice.
Throughout their journey down south, the albatross followed them, and everyday, came for food or play, at the call of the mariners. The nights turned to become “glimmered” like “the white moonshine.”
Part 1 of the poem concludes with the ancient mariner possessing an ill omen about the albatross. This part of the narration gave the ancient mariner a troubled look. When asked the reason for the same by the wedding guest, the mariner let it out and revealed the terrible truth that he shot the albatross.

6. Answer the following by choosing the right option from those given below:

(b) Was the wedding guest happy to be stopped? Give reasons for your answer.
Ans: No, the wedding guest was not happy because he was forcibly detained by the ancient mariner whareas he being a close relative of the bridegroom, was expected to reach there well in time. The guests had already arrived there. The feast was set. The loud sound of bassoon could be heard.

(c) Describe the ancient mariner.
Ans: The ancient mariner looks lik a lunatic with his grey long beard with glittering eyes, His hands were rough and skinny and he had a mesmerising gaze. The mariner was badly ridden with a sense of guilt and remorse after the wanton act of killing the Albatross.He is cursed to be haunted indefinitely by his dead shipmates, and to be compelled to tell the tale of his downfall at random times.

(d) How does the mariner describe the movement of the ship as it sails away from the land?
Ans: The mariner described the movement of the ship as it sailed away from the land in a very animated and interesting way. His description was so realistic that the wedding guest was mesmerised. As the ship moved southward, the weather was pleasant. But soon the weather started changing for the worst. First, a storm broke. It later turned to mist and snow, due to which their ship was stuck in ice.

(f) How did the sailors reach the land of mist and snow?
Ans: The sailor started their journey happily. But after a very short spell of smooth journey a very turbulent and violent sea-storm rose. The storm was so powerful that it completely overtook the ship and drove the ship to the extreme South. In this way, the sailors reached the land of mist and snow.

8. There are a number of literary device used in the poem. Some of them have been listed below. Choose the right ones and write them down in the table as shown in the example. In each of the cases explain what they mean.

(a) In which direction did the ship start moving? How can you say?
Ans: The ship started moving northwards. This can be said because the line in the poem says: “the sun now rose upon the right.”

(c) How did the other mariners behave towards the Ancient Mariner at first? How many times did they change their mind about the Ancient Mariner? What does this tell us about their character?
Ans: The other mariners rebuked him at first to have killed the albatross. However, they changed their mind immediately after that to praise the ancient mariner who killed the bird which brought in fog and mist. This shows how confused the mariners were, to set up a fixed notion about the ancient sailor.

(e) What is indicated by the line ‘The bloody sun, at noon,/Right up above the mast did stand,/No bigger than the moon’?
Ans: This line indicates the excessive heat of the sun, which shone above the mast at noon. The word
‘bloody’ shows how unwelcome the sun was.

(f) How does the mariner describe the fact that they were completely motionless in the middle of the sea?
Ans: The stanza “Day after day, day after day,/We stuck, nor breath nor motion,/As idle as a painted ship/Upon a painted ocean,” portrays a still picture of the sea and the ship.

(g) What is the irony in the ninth stanza? Explain it in your own words.
Ans: The ship was surrounded by the water on all sides. The sailors were in the middle of so much water but they did not have single drop of water to drink.The water of the ocean is salty, and thus inappropriate for the sailors to quench their thirst.

(h) What is the narrator trying to convey through the description of the situation in the tenth and eleventh stanza?
Ans: In these stanzas, the narrator tries to convey the standstill description of the ocean and the ship. Everything rot because of the motionless sea. Animals from deep within the ocean had come out of their places and crawled in the slimy sea.
At night, the ‘death-fires’ seemed to dance near them. The narrator refers to the sea water as the witch’s oil. Just like a witch’s oil has many shades and keeps boiling, the sea water also had ‘green, blue and white’ colours. However, this was due to the different coloured creatures crawling in the sea.

(j) Describe the condition of the mariners as expressed in the thirteenth stanza.
Ans: The mariners were feeling thirsty but they didn’t have water to quench their thirst. Their tongue had become completely dry at the root. They couldn’t speak because they felt if their throats were chocked with soot.

12. Like part one, the second part also has a number of literary devices. List them out in the same way as you had done in question number seven and explain them.
Ans:

14.Find examples of the use of interesting sounds from the poem and explain their effect on the reader.