Oersted showed that electricity and magnetism are related to each other.His research later used in radio, television etc.
The unit of magnetic field strength is named Oersted in his honour.

On passing the current through the copper wire XY in the circuit, the compass needle which is placed near the conductor gets deflected. If we reverse the direction of current, the compass needle deflect in reverse direction. If we stop the flow of current, the needle comes at rest.
Hence, it can be concluded that electricity and magnetism are linked to each other. It shows that whenever the current will flow through the conductor,then a magnetic field will develop.

3. Magnetic Field : It is the region surrounding a magnet, in which force of magnet can be detected. It is a vector quantity, having both direction& magnitude.

Hence, magnetic field line is a path along which a hypothetical free north pole tend to move towards south pole.

The above electric circuit in which a copper wire is placed parallel to a compass needle, shows the deflection in needle gets reversed, when the direction of current reversed. Hence electricity and magnetism are related to each other.

9. Magnetic Field due to Current through a Straight Conductor 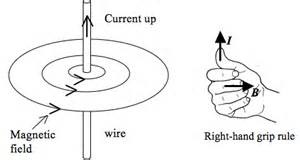 10. Magnetic Field due to Current through a circular Loop

Every point on the wire carrying current give rise to the magnetic field,appearing as a straight line at the centre of loop. By applying Right hand Thumb rule, we can find the direction of magnetic field at every section of the wire.

11. Solenoid :A Coil of many circular turns of insulated copper wire wrapped closely in the shape of a cylinder is called solenoid.

12. Magnetic field due to a current in a solenoid :

The strength of the magnetic field produced depends upon
(a) the number of turns
(b) Strength of current in the solenoid used in making solenoid.

13. Electromagnet : Strong magnetic field inside the solenoid can be used to magnetise a magnetic material for example soft iron, when it is placed inside the coil. The magnet so formed is called electromagnet.It is a temporary magnet.
Properties of Magnetic Field:

14. Force on a current carrying conductor in a magnetic field.

Andre Marie Ampere (1775–1836) suggested that the magnet also exert an equal and opposite force on the current carrying conductor.

We will observe that the rod will displace i.e. the rod will experience a force, when it is placed in magnetic field, in a perpendicular direction to its length.

Electrical energy is converted into mechanical energy by using an electric motor. Electric motor works on the basis of rule suggested by Marie Ampere and Fleming’s Left Hand Rule.

In an electric motor, a rectangular coil is suspended between the two poles of a magnetic field. The electric supply to the coil is connected with a commutator. Commutator is a device which reverses the direction of flow of electric current through a circuit. 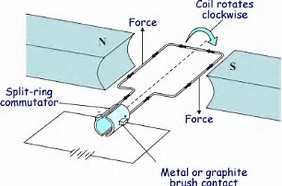 17. Galvanometer : It is an instrument that can detect the presence of a current in a circuit. If pointer is at zero (the centre of scale) then there will be no flow of current.
If the pointer deflect on either side right or left, this will show the direction of current. Represented by

When the armature moves within the magnetic field an electric current is induced. The direction of induced current changes, when the armature crosses the halfway mark of its rotation. Thus, the direction of current changes once in every rotation. Due to this, the electric generator usually produces alternate current, i.e. AC. To convert an AC generator into a DC generator, a split ring commutator is used. This helps in producing direct current.

18. Electromagnetic Induction: Can be explained by two experiments

(a) First Experiment  “Self Induction”

In this experiment, when the north pole of bar magnet is brought closer to the coil or away from the coil, we see momentary deflection in the needle of galvanometer on either side of null point. First right and then left.

Similarly, if we keep the magnet stationary and coil is made to move towards or away from the north pole of magnet. Again we will observe deflection in the needle of galvanometer.

It concludes that motion of magnet with respect to coil or vice-versa, changes the magnetic field. Due to this change in magnetic field lines, potential difference is induced in the same coil, which set up an induced current in the circuit.

Hence, we conclude that potential difference is induced in secondary coil (coil-2), whenever there is a change in current, in primary coil(coil-1) (by on and off of key).

This is because, whenever there is change in current in primary coil

Now, magnetic field lines around the secondary coil (coil-2) will change and induces the electric current in it (observed by the deflection of needle of Galvanometer in secondary circuit)

This process, by which changing of strength of current in primary coil, induces a current in secondary coil is called Electromagnetic Induction”

The induced current is found to be highest when the direction of motion of coil is at right angles to the magnetic field. 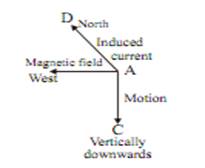 Rule can be defined as :

Electrical generator is based on the principle of electromagnetic induction. It convert mechanical energy into electrical energy.

Electric power can be transmitted to longer distances without much loss of energy. Therefore cost of transmission is low.

In India the frequency of AC is 50Hz. It means after every 1/100 second it changes its direction.

In our homes, the electric power supplied is of potential difference V = 220V and frequency 50Hz.

Earth wire provide a low resistance to the current hence any leakage of current to the metallic body of the appliances, keep its potential equal to that of earth. That means zero potential and the user is saved from severe electric shock.

Point to be noted in Domestic Circuit

(a) Each appliance has a separate switch of ON/OFF
(b) In order to provide equal potential difference to each appliance, they should be connected parallel to each other. So that they can be operated at any time.

Due to fault in the appliances or damage in the insulation of two wires, the circuit will offer zero or negligible resistance to the flow of current. Due to low resistance, large amount of current will flow.
According to Joule’s law of heating effect , heat is produced in live wire and produces spark, damaging the device and wiring.

Overloading can be caused by (1) Connecting too many appliances to a single socket or (2) accidental rise in supply voltage if the total current drawn by the appliances at a particular time exceeds the bearing capacity of that wire, it will get heated up. This is known as overloading. Fuse a safety device can prevent the circuit from overloading and short circuiting.

Magnetic Effects of Electric Current class 10 Notes. CBSE quick revision note for Class-10 Science, Chemistry, Maths, Biology and other subject are very helpful to revise the whole syllabus during exam days. The revision notes covers all important formulas and concepts given in the chapter. Even if you wish to have an overview of a chapter, quick revision notes are here to do if for you. These notes will certainly save your time during stressful exam days.