(i) Economic – There was remarkable economic growth from the 1780s to 1820 in the cotton and iron industries, in coal mining, in the building of roads and canals and in foreign trade.

(ii) Political – The series of incidents occurred in British industrial development between 1760 and 1820. These dates coincided with those of the reign of George III.

It had been politically stable since the seventeenth century, with England, Wales and Scotland unified under a monarchy. This meant that the kingdom had common laws, a single currency and a market that was not fragmented by local authorities. Besides, England had great domestic and international market under its control which helped in the growth of Industrial Revolution.

The onset of textile industry also helped in the emergence of Industrial Revolution.

(a) Invention of Machines in Cotton Industry: 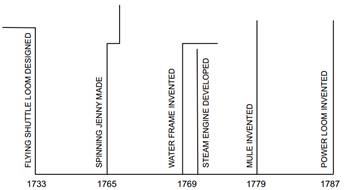 (b) Increase in Production

Railways took the industrialization to the second stage.

Advantages and Disadvantages  – In the 1830s, the use of canals revealed several problems. The congestion of vessels made movement slow on certain stretches of canals, and frost, flood or drought limited the time of their use. The railways now appeared as a convenient alternative. About 6,000 miles of railway was opened in Britain between 1830 and 1850, most of it in two short bursts. During the ‘little railway mania’ of 1833-37, 1400 miles of line was built, and during the bigger ‘mania’ of 1844-47, another 9,500 miles of line was sanctioned.

(a) Condition of workers: There was, at the same time, a massive negative human cost. This was evident in broken families, new addresses, degraded cities and appalling working conditions in factories. The condition of workers was quite miserable. They became victims of restlessness, epidemics and diseases.

(b) Employment of Women and Children in industries: The Industrial Revolution was a time of important changes in the way that children and women worked. The earnings of women and children were necessary to supplement men’s meagre wages. Factory managers considered child labour to be important training for future factory work

Industrial Revolution class 11 Notes History. CBSE quick revision note for class-11 Mathematics, Physics, Chemistry, History and other subject are very helpful to revise the whole syllabus during exam days. The revision notes covers all important formulas and concepts given in the chapter. Even if you wish to have an overview of a chapter, quick revision notes are here to do if for you. These notes will certainly save your time during stressful exam days.