NOMADISM AS A WAY OF LIFE

On the plateaus, plains and deserts —

CHANGES IN PASTORAL LIFE DUE TO COLONIAL RULE

• Under colonial rule the life of the pastoralists changed completely. Their grazing grounds became less, their movements were regulated, the revenues they had to pay increased, their trade and crafts and agricultural produce declined. 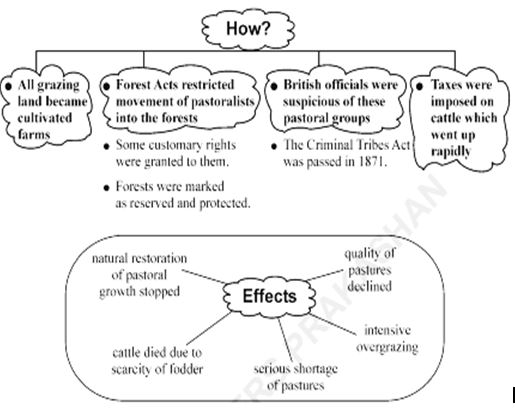 Colonial administration saw the pastoral land as a waste land that needed to be cultivated.In most areas the grazing tracts used regularly by pastoralists was taken for cultivation.
The forests which were demarked as ‘Protected’ and ‘Reserved’ completely restricted the movements of pastoralists.
It completely disturbed the life of the pastoralists.
British distrusted mobile craftsman and traders.They preferred settled population for proper control.
the 1871 Criminal Tribes Act classified many communities of craftsman,traders and pastoralists as criminal tribes.
More amount of taxes were imposed to increase revenue income. Pastoralists suffered heavily from that.

Africa was a major pastoralists community in the world. Even today 22 million Africans depend on some form of pastoral activity for their livelihood. They include communities like Bedouins, Berbers, Maasai, Somali, Boran and Turkana.

The Maasai — Changes in their way of life

The Maasai cattle herders live primarily in East Africa. Rules, laws and regulations have changed their way of life. There are many problems which they have faced, the most prominent being continuous loss of their grazing grounds. This has many reasons :

The Kaokoland herders have faced a similar fate.

Confined to special reserves — Traditionally, pastoralists moved to different pastures but with the restrictions imposed on them these pastoralists were confined to special reserves. They could not move without special permits. They were not allowed to enter the markets in white areas.Some tribes were affected by the Criminal Tribes Act. Even their trade activities were adversely affected.

Why nomadism — Pastoralists are nomadic — this allows them to survive bad times and avoid crises, such as drought. But later they could not shift to greener pastures and their cattle died of starvation.

The Maasai society consisted of

Elders: ruling group decided the affairs of the community and settled disputes
Warriors: young men who carried out cattle raids and defended the community

The British appointed chiefs to administer the affairs of the tribe. These chiefs were wealthy and lived a settled life as they had both pastoral and non-pastoral income. The poor pastoralists passed through bad times and worked as labourers. There were two important changes :

With increasing restrictions on their mobility , pastoralists find it difficult to move in search of pastures. It strains the existing pastures by overgrazing.  The pastures deteriorate. The condition like drought worsens the situation.

Pastoralists adapt to new times. They find new pastures, change their routes for their annual movement, reduce their cattle numbers, press for their rights, etc. It is being advocated today that pastoral nomadism is the best form of life suited to the dry, semi-arid and mountainous regions of the world

History-Pastoralists in the Modern World class 9 Notes. CBSE quick revision note for Class-9 Social Science, Chemistry, Maths, Biology and other subject are very helpful to revise the whole syllabus during exam days. The revision notes covers all important formulas and concepts given in the chapter. Even if you wish to have an overview of a chapter, quick revision notes are here to do if for you. These notes will certainly save your time during stressful exam days.