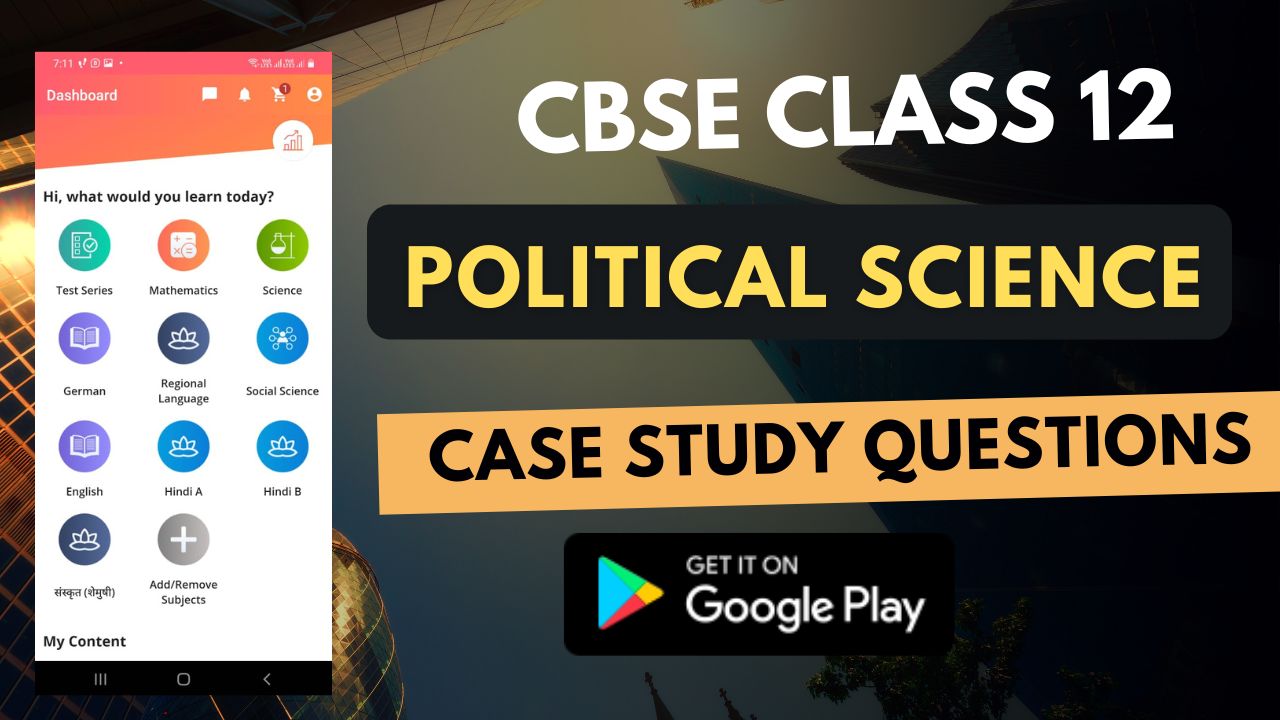 Political science is the study of political behaviour, systems, and politics, as well as their analysis, description, and prediction. Students who choose Political Science in senior high school are exposed to a variety of topics in the discipline, allowing them to become global citizens and build abilities in understanding, applying, and evaluating them.

The goals of the educational program planned by the CBSE for Class 12 students expect to empower students to be know all about a portion of the critical political events and figures in the post freedom period, foster abilities of political examination through events and processes of ongoing history, empower the students to extend their viewpoint past India and get a handle on the political guide of the contemporary world.

Students are exposed to diverse streams of political science through the various courses. Class 12 Political Science is divided into two parts:

The Central Board of Secondary Education (CBSE) has presented a couple of changes in the question paper pattern. This year Class 12 students have to solve questions based on the case study. The case studies in class 12 Political Science will carry 4-5 marks. As per the new pattern of examination, CBSE will ask only objective questions in these case study questions.

According to Sanyam Bhardwaj (controller of examinations, CBSE), the student will solve a full passage on which analytical questions will be addressed. Before answering the questions, students must thoroughly read the passage. Meanwhile, the board is preparing to incorporate more such questions in the coming years, according to Bhardwaj.

As discussed, CBSE will ask mostly MCQs in class 12 Political Science. You will get 4-5 questions in each passage. The question text will have four options to choose from. Out of these four options, only one option is correct. Students will get one mark each for the correct response.

Class 12 Case Study is an excellent approach to improving students’ exam results. The reason for this is that case study questions are often descriptive, which makes it easier to obtain more information. Students are graded on many levels of ability while studying for the board exams, such as writing, reading, and so on. One of the types of questions that can be used to evaluate critical thinking is case study questions. The inclusion of such questions in the curriculum is intended to emphasize the development of problem-solving skills as well as the capacity to apply skills in real situations.

If you attempt them with an attentive and alert mind, the case study questions can be the highest scoring part of the paper. These are usually application-based questions that relate to the principles presented in the textbook. The plot of the question is based on a situation that people face on a daily basis.

CBSE is preparing a question bank on case studies for all major subjects. You can get it on CBSE official website. We are providing hundreds of case study questions for class 12 Political Science in the myCBSEguide App and Student Dashboard.

Read the following passage carefully and answer the questions that follow:
The Cold War threatened to divide the world into two alliances. Under these circumstances, many of the newly independent countries, after gaining their independence from the colonial powers such as Britain and France, were worried that they would lose their freedom as soon as they gained formal independence. Cracks and splits within the western and eastern alliances were quick to appear headed by the USA and the USSR respectively. Communist China quarreled with the USSR towards the late 1950s, and, in 1969, they fought a brief war over a territorial dispute.

Study the following passage carefully and answer the questions that follow:

All India 2017 The smaller states in the alliances used the link to the superpowers for their own purposes. They got the promise of protection, weapons and economic aid against their local rivals, mostly regional neighbours with whom they had rivalries. The alliance systems led by the two superpowers, therefore, threatened to divide the entire world into two camps. This division happened first in Europe. Most countries of Western Europe sided with the US and those of Eastern Europe joined the Soviet camp. That is why these were also called the ‘Western’ and the ‘Eastern’ alliances.
(i) Name one organization each related to the ‘Western’ and the ‘Eastern’ alliances.
(ii) Why were the smaller states interested in joining the super alliances?
(iii) How did the ‘alliance system’ threaten to divide the world?

Read the following passage carefully and answer the questions that follow:
Just before Independence, it was announced by the British that with the end of their rule over India, the paramountcy of the British crown over the Princely States would also lapse. This meant that all these states, as many as 565 in all, would become legally independent. The British government took the view that all these states were free to join either India or Pakistan or remain independent if they so wished. This decision was left not to the people but to the princely rulers of these states. This was a very serious problem and could threaten the very existence of a united India. The problems started very soon. First of all, the ruler of Travancore announced that the state had decided on Independence. The Nizam of Hyderabad made a similar announcement the next day. Rulers like the Nawab of Bhopal were averse to joining the Constituent Assembly.

Students can answer these questions by reading the passages in question. Students will obtain a clear concept of what the solutions should be by reading the chapter. However, tackling Case-based questions or passage-based questions would be easier if you have a better understanding of the core concepts that can be learned from the NCERT Textbooks.

Concentrate on the following guidelines while answering a case study-based question:

“There are no secrets to success. It is the result of preparation, hard work, and learning from failure.”