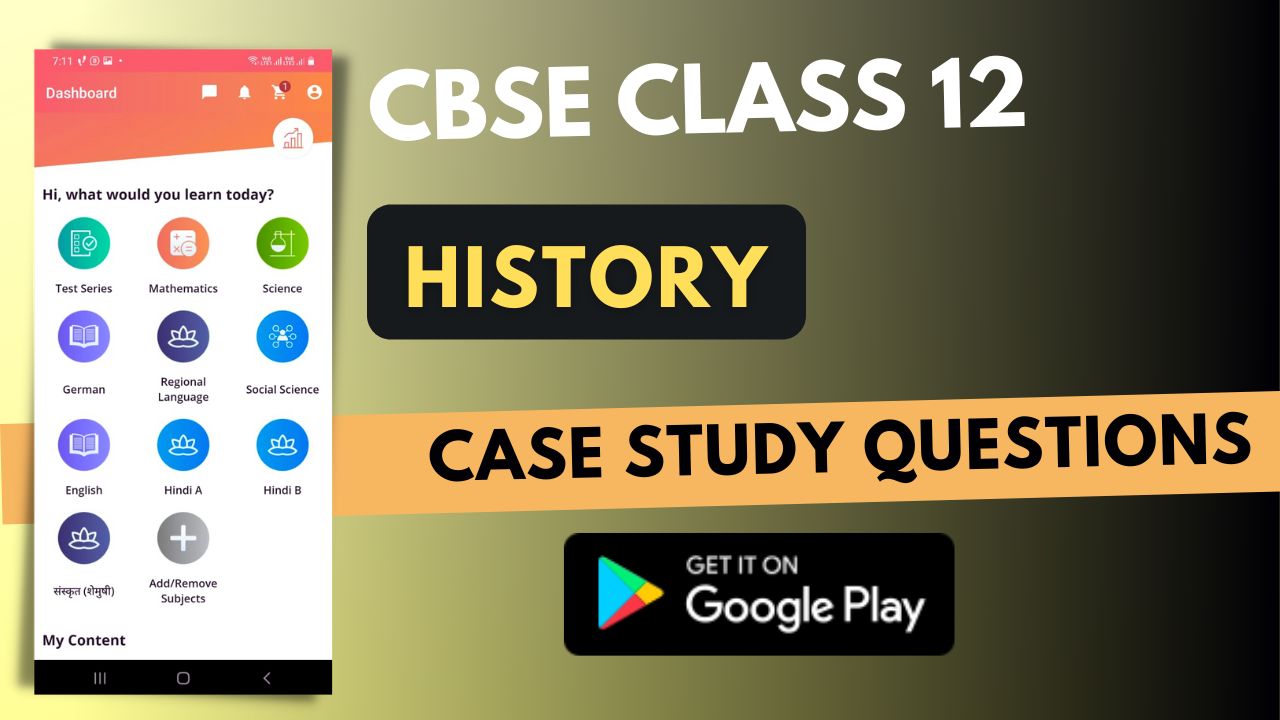 For CBSE Class 12 students enrolled in the Arts/Humanities stream, history is an important subject. History is the study of ancient eras, including the evolution of humans, kings, queens, wars, and many other topics.  History is more than just a collection of facts; it is a critical discipline, a process of inquiry, and a way of learning about the past.

CBSE Class 12 history case study is the main component of the CBSE board examination. It will assess students’ comprehension, reasoning, and creative abilities. Students will benefit from competency-based and skill-oriented teaching and learning.

Good Marks in Board Exams

With the help of CBSE class 12 history case study questions and answers, students can score good marks in board exams. Most of the questions are straightforward. You can get the answers from the given text directly. On the other hand, these are MCQs, so choosing the correct option is much easier as compared to writing the answer.

As you have already seen in other subjects too, there is one passage followed by 4-5 MCQs. CBSE will ask the same type of case study questions in class 12 History too. Here, you will find a textual passage or some visual input and a few multiple-choice questions based on it.

Read the following passage carefully and answer any three questions that follow:

Somnath Lahiri said:
Well, Sir, I must congratulate Pandit Nehru for the fine expression he gave to the spirit of the Indian people when he said that no imposition from the British will be accepted by the Indian people. Imposition would be resented and objected to, he said, and he added that if need be we will walk the valley of struggle. That is very good, Sir – bold words, noble words.
But the point is to see when and how are you going to apply that challenge. Well, Sir, the point is that the imposition is here right now. Not only has the British Plan made any future Constitution… dependent on a treaty satisfactory to the Britisher but it suggests that for every little difference you will have to run to the Federal Court or dance attendance there in England; or to call on the British Prime Minister Clement Attlee or someone else. Not only is it a fact that this Constituent Assembly, whatever plans we may be hatching, but we are also under the shadow of British guns, British Army, their economic and financial stranglehold’ – which means that the final power is still in the British hands and the question of power has not yet been finally decided, which means the future is not yet completely in our hands. Not only that, but the statements made by Attlee and others recently have made it clear that if need be, they will even threaten you with division entirely. This means, Sir, there is no freedom in this country. As Sardar Vallabh Bhai Patel put it some days ago, we have freedom only to fight among ourselves. That is the only freedom we have got.
Therefore, our humble suggestion is that it is not a question of getting something by working out this Plan but to declare independence here and now and calling upon the Interim Government, call upon the people of India, to stop fratricidal warfare and lookout against its enemy, which still has the whip in hand, the British Imperialism – and go together to fight it and then resolve our claims afterward when we will be free.

Paes gives a vivid description of the bazaar: Going forward, you have a broad and beautiful
street In this street live many merchants,
and there you will find all sorts of rubies, and diamonds, and emeralds, and pearls, and seed- pearls, and cloths, and every other sort of thing there is on earth and that you may wish to buy. Then you have there every evening a fair where they sell many common horses and nags, and also many citrons, and limes, and oranges, and grapes, and every other kind of garden stuff, and wood; you have all in this street.

More generally, he described the city as being “the best-provided city in the world” with the markets “stocked with provisions such as rice, wheat, grains, Indian corn and a certain amount of barley and beans, moong, pulses and horse-gram” all of which were cheaply and abundantly available. According to Fernao Nuniz, the Vijayanagara markets were “overflowing with an abundance of fruits, grapes and oranges, limes, pomegranates, jackfruit and mangoes and all very cheap.”

Meat too was sold in abundance in the marketplaces. Nuniz describes “mutton, pork, venison, partridges, hares, doves, quail and all kinds of birds, sparrows, rats and cats and lizards” as being sold in the market of Bisnaga.

Read the following excerpt carefully and answer any three questions:
Some of the earliest bhakti movements (c. sixth century) were led by the Alvars (literally, those who are “immersed” in devotion to Vishnu) and Nayanars (literally, leaders who were devotees of Shiva). They travelled from place to place singing hymns in Tamil in praise of their gods. During their travels the Alvars and Nayanars identified certain shrines as abodes of their chosen deities. Very often large temples were later built at these sacred places. These developed as centres of pilgrimage. Singing compositions of these poet-saints became part of temple rituals in these shrines, as did worship of the saints’ images. Some historians suggest that the Alvars and Nayanars initiated a movement of protest against the caste system and the dominance of Brahmanas or at least attempted to reform the system. To some extent this is corroborated by the fact that bhaktas hailed from diverse social backgrounds ranging from Brahmanas to artisans and cultivators and even from castes considered “untouchable”. The importance of the traditions of the Alvars and Nayanars was sometimes indicated by the claim that their compositions were as important as the Vedas.

Read the following excerpt carefully and answer any three questions:

‘We are not just going to copy’

We say that it is our firm and solemn resolve to have an independent sovereign republic. India is bound to be sovereign, it is bound to be independent and it is bound to be a republic. Now, some friends have raised the question: “Why have you not put in the word ‘democratic’ here.” Well, I told them that it is conceivable, of course. that a republic may not be democratic but the whole of our past, is witness to this fact that we stand for democratic institutions. Obviously, we are aiming at democracy and nothing less than a democracy. What form of democracy, what shape it might take is another matter? The democracies of the present day, many of them in Europe and elsewhere, have played a great part in the world’s progress. Yet it may be doubtful if those democracies may not have to change their shape somewhat before long if they have to remain completely democratic. We are not going just to copy, I hope, a certain democratic procedure or an institution of a so-called democratic country. We may improve upon it. In any event whatever system of government we may establish here must fit in with the temper of our people and be acceptable to them. We stand for democracy. It will be for this House to determine what shape to give to that democracy, the fullest democracy, I hope. The House will notice that in this Resolution, although we have not used the word “democratic” because we thought it is obvious that the word “republic’’ contains that word and we did not want to use unnecessary words and redundant words, but we have done something much more than using the word. We have given the content of democracy in this Resolution and not only the content of democracy but the content, if I may say so, of economic democracy in this Resolution. Others might take objection to this Resolution on the ground that we have not said that it should be a Socialist State. Well, I stand for Socialism and, I hope, India will stand for Socialism and that India will go towards the Constitution of a Socialist State and I do believe that the whole world will have to go that way.
– Constituent Assembly Debates (Cad), VoL.I

CBSE Class 12 History curriculum focuses on a detailed study of certain topics in ancient, medieval, and modern Indian history, with the goal of blurring the lines between what is traditionally referred to as ancient, medieval, and modern. The syllabus for Indian history books for Class 12 History is subdivided into three parts. To thoroughly cover the syllabus, students must study all three parts. In the table below, we have supplied the content structure for Parts 1, 2, and 3.

How to Practice  Case study questions for Class 12 History

You can follow the following steps to prepare for history case study questions for Class 12 CBSE Board exams.

Step-1 is to read about major events in the NCERT Class 12 History book is one of the methods. It is necessary to read up on the events that you find useful and relevant to the case study questions that you will be asked.

Step-2 is to learn how to answer these questions based on the information that you have read.

Step-3 is to solve sample questions based on the information that you have read. This will give you an idea of the kind of questions that are asked in Class 12 History.

MyCBSEguide offers free test papers, sample papers, past papers and model question papers for all subjects and all grades. You can download the myCBSEguide app and get ready for exams and develop your skills. It not only provides CBSE class 12 History case study question solutions, but it also provides chapter-wise test papers, top revision notes, and other study resources for class 12 History students.